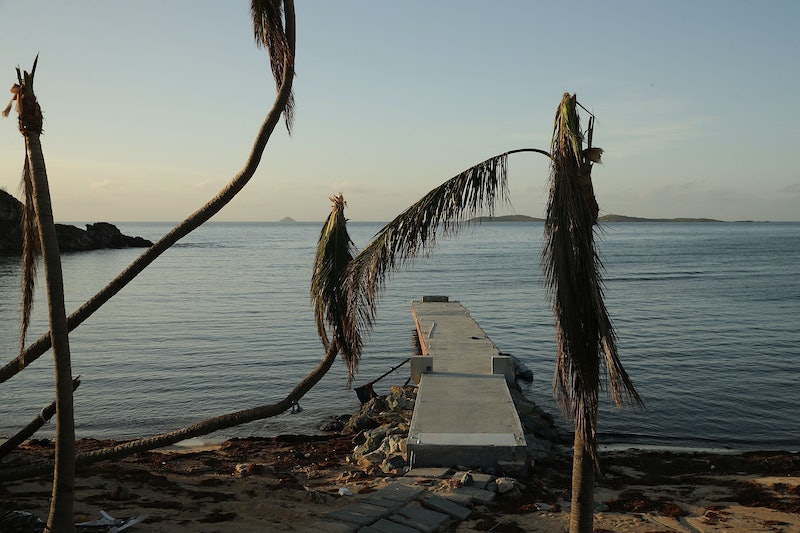 When I packed my bug-out bag in preparation for Hurricane Irma, I knew I needed to check off all of the essentials: my passport and personal documents, cash, a change of clothes, emergency food and water, a first aid kit, a flashlight, rain gear. What I didn't know was how important the last-minute nonessential item I packed — a book — would be, or how much reading would help me cope with my hurricane Irma experience.

I had been living in the Virgin Islands on St. John for just three weeks when Hurricane Irma laid its path of devastation across the Caribbean. Together with seven adults, one infant, three cats, and three dogs, I watched the storm rage outside our apartment building window, a sight unlike anything I had ever seen before. We could hear the screaming winds whip in every direction, feel the mounting pressure between our ears, see houses collapse, roofs take flight, car and home windows turned to dust. That is, before we had to evacuate mid-storm to a basement laundry mat as the building around us started to come down.

I don't know how long we were in the dark and wet basement. What felt like days was probably closer to four or five hours, and when we finally were able to leave, the world outside was something different, something apocalyptic. The building that had served as our refuge was missing large portions of its exterior walls, and several of the storage units that sat above it were destroyed. Across the street, the church had lost a large portion of its roof, several windows, and both steeples, one of which dangled close to the ground like a limp doll arm. The trees, the ones that were left standing anyways, were stripped bare of their leaves and the usually vibrantly green island took on shades of black and brown.

Like the once idyllic paradise I saw in pieces around me, I was wrecked.

After doing the best we could to put together some kind of shelter in the least damaged unit in the building, the other Apartment Survivors, as I have began to call us, and I tried our best to get some sleep that first night. It was obvious that the storm was only the beginning of what would be a long and hard journey back to normalcy. But no matter how tired I felt, how emotionally and physically drained I was, sleep alluded me. I laid awake, still convinced I heard the wind howling or people screaming for help in the distance. Every time I closed my eyes, I saw heavy rain, uprooted trees, collapsed houses. Every time I closed my eyes, I saw destruction.

That's when I reached for my bug-out bag and the book I had stashed in there: Virginia Woolf's To the Lighthouse. It wasn't my favorite novel, and in fact it wasn't even one of the half dozen books I had brought with me from home but rather one I found on the bookshelf of the house I was staying in. It had been years since I had read the book in a college literature class, but after seeing the first line — '"Yes, of course, if it's fine tomorrow," said Mrs. Ramsay. "But you'll have to be up with the lark," she added.' — I was overwhelmed with familiarity and a sense of much-needed comfort. The world around me may have changed immeasurably in the last 18 hours, but my favorite world, the world of books, had stayed exactly the same.

Three pages later, and I drifted off to a restful, dreamless sleep.

The day after the storm was when a new reality started to sink in. Daylight illuminated the true reach of Irma's devastation, and made it clear life as usual was going to be out of the question. Those of us who stayed in the apartment building packed bags, the baby, and the animals and headed to higher ground to bunker down in a less damaged villa a family I didn’t meet until that very day opened up to me and over 20 other refugees from the storm. People spread out across lawn chairs, couches, and whatever open bed they could find. Everyone pooled supplies and immediately started figuring out what to ration and how, who could accomplish which much-needed task, and what our plans would be next.

I spent three days in my strange new refuge without power, running water, or communication with the outside world. In an unfamiliar house with two dozen or so other survivors I barely knew, my book offered me the same kind of comfort it did the first night after the storm. Its familiarity offered solace in an unknown place, its simplicity offered relief from the complicated situation around me. My book quickly became my lifeline — it was something concrete I could hold onto, something I could carry with me, something that didn't require electricity to power or service to use. It was an escape from the overwhelming talk of food rationing, water finding, and evacuation possibilities when I needed it.

Four days after the storm, I was evacuated off of St. John on a FEMA boat and began my long and stressful journey back to the mainland United States. Because we were in an emergency situation, I had to bring only one small backpack — my bug-out bag — and off all of the things I squeezed into it, my book became the most important. It was what I clutched when I felt seasick on the two hour boat ride to the unfamiliar island of St. Croix. It was what I read in a strange hotel room while I waited for news of a potential flight home. It was what I used to distract myself when I finally made it to the airport and couldn't bear to watch the TV news coverage of the impending doom in Florida after just going through it all myself.

When I finally did get home, I was exhausted mentally, physically, and emotionally. I stayed relatively quiet the first week I was back, and avoided contact with anyone who wasn't my boyfriend, because I just wasn't ready to talk about what had happened yet. I couldn't watch the news without having flashbacks of what I had just gone through. I couldn't go on social media without being triggered by storm images. Instead, I turned to my trusted home library. I reread Harry Potter and the Sorcerer's Stone, got lost in the stories of Haruki Murakami's Blind Willow, Sleeping Woman, memorized my favorite lines from Letters to a Young Poet. If I wasn't home on the couch curled up with a novel, I was out hiking with Kindle in hand. Day after day, night after night, I reached for my bookshelf for strength, for encouragement, for power I didn't yet have in myself. Just like it had before, it provided me with exactly what I needed.

Like so many other times in my like, my books saved me, comforted me, and helped me heal. Books saved my life.

More like this
The Most Anticipated Books Of October 2022
By K.W. Colyard
For Mur Lafferty, Genre Is Everything
By K.W. Colyard
'Firefly Lane' Season 2 Will Be The Show's Last — But There's A Twist
By K.W. Colyard and Grace Wehniainen
10 New Must-Read Books Out This Week
By K.W. Colyard
Get Even More From Bustle — Sign Up For The Newsletter