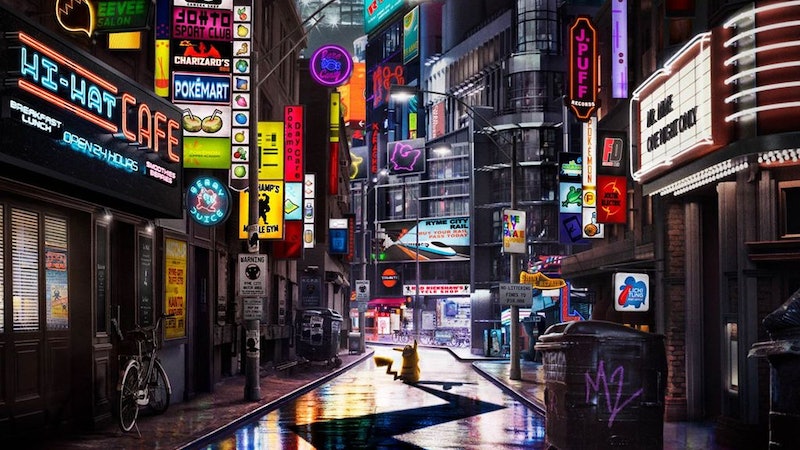 The 2016 Pokémon game Detective Pikachu takes place in an entirely new space outside of any existing Pokémon location: Ryme City. While Pokémon players are used to getting a brand new area to explore with each generation of games, there was something different about Ryme City, something that set it apart from past Pokémon locations, such as Lavender City or Sootopolis. And it's the same way in the new film adaptation of the game, coming to theaters on May 10. It turns out that Ryme City in Detective Pikachu is a place apart, not just in location, but in attitude — and for calculated reasons.

The world of Pokémon began in Kanto — it's the region where newbie trainer Ash Ketchum lived, began his training, and ran into Team Rocket. Based on the real-world Kantō region of Japan and filled with colorful locations like Viridian and Fuchsia City, Kanto set the standard for Pokémon places with real-world parallels. Since then the Pokémon world's grown immensely, with locations diverse as Hoenn (based on the Japanese islands of Kyushu), Unova (based on New York City), Sinnoh (based on northernmost Japanese island Hokkaido), and Alola (based on the Hawaiian islands). So where does Ryme City fit in?

Interestingly, it doesn't. And there's a cagey reason why. Detective Pikachu was a major change from most games in the Pokémon franchise — instead of moving through a region's cities and towns, collecting Pokémon and battling for Gym badges, in Detective Pikachu players are paired up with a talking Pikachu to solve mysteries in their city. Not only that, but in this area, Pokémon are much more than pets or fighters. They live in the city, work there, interact on the same level as the humans — it's almost a Pokémon utopia where all live in harmony.

That's a big difference from the proven successful formula of Pokémon, and with Detective Pikachu taking such a wild leap from the format, it makes sense game creators would want to create an entirely new area not tied directly to any existing Pokémon locale. If the game tanked, it would be a lot easier to quietly ignore it without ruining the rest of the game's canon.

Fortunately, according to Metacritic, the game was well-received, its differences something fans responded to. A Polygon review pointed out "Pokémon are friends here," while Switch Era said, "Rather than Pokémon simply lounging next to their trainers on beach towels ... Pokémon are shown to have actual roles and personalities".

The positive feedback might have been what spurred Legendary Entertainment to take a gamble on a movie version. The production company behind Detective Pikachu keep most of the game's ideas intact, including taking place almost entirely in Ryme City, a space with a different relationship to Pokémon than the rest of the universe. Of course, mention's made in-game to other Pokémon places like Alola, and there are still Pokémon Trainers and Contests, meaning Ryme City's in the same universe as the rest of the Pokémon locations.

If the Detective Pikachu movie is successful, Ryme City might even get a firmer tie back to the rest of the Pokémon world. Detective Pikachu, the first live-action/CGI Pokémon movie, was shot in real-world London according to The Location Guide. And while there's no official word yet, Reddit fan theories place Ryme City there too, as part of already-existing Pokémon Sword and Shield area Galar, inspired by the UK region and its islands. Until then, Ryme City will remain its own idealized space where man and Pokémon exist in crime-solving harmony.

More like this
Nicola Coughlan Shared A Lady Whistledown Excerpt From ‘Bridgerton’ Season 3
By Grace Wehniainen, Alyssa Lapid and Sam Ramsden
The New Bachelor Will Be Announced Next Week & Here Are The Top Contenders
By Grace Wehniainen
Margot Robbie Breaks Her Silence On *That* Viral 'Barbie' Moment
By Maxine Harrison
12 ’90s Movie References You Missed In 'Do Revenge'
By Radhika Menon
Get Even More From Bustle — Sign Up For The Newsletter