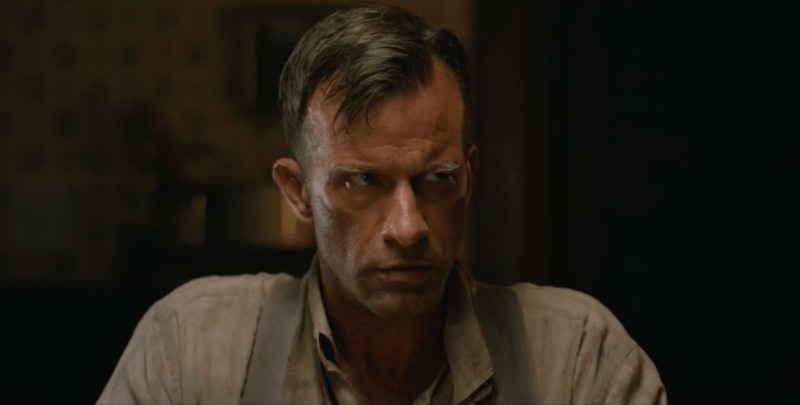 It's been a banner year for horror maestro Stephen King, as the terrifying movie adaptation of It was successful beyond expectations, taking the #1 spot at the box office, and Netflix's adaptation of Gerald's Game garnered positive reviews for its portrayal of a woman confronting (mostly) internal horrors while immobilized. Now King's novella 1922, from his recent 2010 anthology Full Dark, No Stars, is hitting the slightly bigger screen with a Netflix adaptation available for streaming on Oct. 20. A farmer murders his wife to remain on "his" land, but the guilt begins to eat away at him, along with some vengeful rats... who may or may not be in his head. So how scary is 1922, really? Does it feature a central monster like It or lean heavily on the horrors of the human mind, like Gerald's Game?

The best King stories feature a heady blend of both, with man's inhumanity matching ancient evils and vampires blow-for-blow in endangering people. In 1922, farmer Wilfred James' toxic masculinity leads him to murder his wife Arlette, rather than accept her choices involving losing what he believes define a man — his land and his son. "Life is rarely fair, especially out here," Arlette tells him, referring as much to herself as his dilemma.

People can be cruel, and usually are in King stories, but the worst enemy is in one's own mind. Wilfred and his son Henry successfully carry out Wilfred's plan, and Arlette is dumped in the well, her body riddled with rats. Wilfred actually gets away with murder; the sheriff has his suspicions, but nothing definitive, and Wilfred's free to live his life exactly as he wanted. Except, in this Dust Bowl version of The Telltale Heart, Wilfred's guilt begins gnawing at his conscience. He and Henry are marked by their murder, unable to escape themselves even if they escaped the law.

And because this is a Stephen King story, their guilt takes on physical form as swarming rats, walking corpses, and wintery isolation. It's a one-two punch guaranteed to freak most folks out — if slow-burning, long-drawn psychological torture doesn't raise hairs on the back of your neck, the high-pitched scrabbling of small rodents and the occasional burst of gore should hit you square in the amygdala. 1922 likely won't satisfy the limb-hacking, intestine-popping itch of Saw or Hostel fans; its violence is less immediate and excruciating, even if it's rooted in the far scarier realm of "could definitely, maybe happen if I went camping/tried some home repairs/had to live off the land."

However, if being alone is enough to make you startle at the slightest sound, this is the spine-tingler for you. Even at its sunniest, the James' farm leaves them miles from their nearest neighbors. Guilty over his part in murdering his mother, Henry runs away leaving Wilfred all alone in the small house, surrounded by land and more land, nothing to keep him company except his own nagging thoughts. Wilfred's slow dissolution is all the more disturbing for the impossibility of stopping it — there's no appeasing the remorse of an action that can't be undone, and his grim resolution of his own damnation leads to his complete unravelling. Though Wilfred's descent takes place partly off-screen, Henry's equally resigned. The best he can wish himself is the belief, "I hope there is no God, because if there's no heaven, there is no hell."

If you want jump-scares and creepy antagonists, you're better off sticking with It, or at least waiting for the sequel to come out. But if you're a sucker for period dramas and slow falls into madness and torment, 1922 is waiting for you on Netflix.

More like this
12 ’90s Movie References You Missed In 'Do Revenge'
By Radhika Menon
These 25 International Horror Movies On Netflix Prove Fear Is A Universal Language
By Bustle Editors
Everything To Know About The Long-Awaited ‘Community’ Movie
By Stephanie Topacio Long
13 Photos Of The 'Blonde' Cast Vs. Marilyn Monroe & Other IRL Counterparts
By Marina Watts
Get Even More From Bustle — Sign Up For The Newsletter