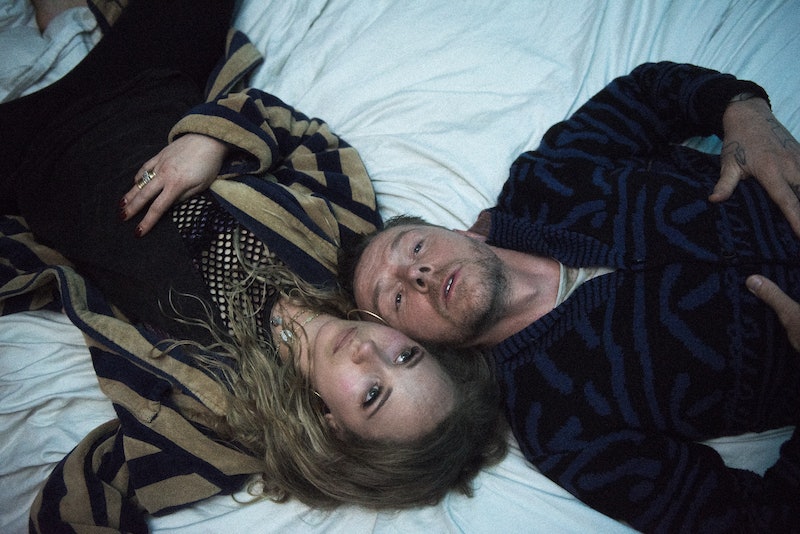 As mental illnesses go, schizophrenia is one of the most misunderstood and frequently sensationalized. The drama Lost Transmissions, which premiered at the Tribeca Film Festival on Sunday, pulls back the curtain on the diagnosis as Hannah (Juno Temple) struggles to help her friend and mentor Theo (Simon Pegg) when he stops taking his medication and experiences a break. Based on a personal ordeal writer/director Katherine O'Brien went through alongside a friend with schizophrenia, the film even highlights the strange, terrible beauty and dark comedy of the condition, without taking away from the frustrating and potentially devastating realities of being mentally ill in America.

"I’ve always been fascinated by that, the 'crazy' definition," Pegg says, sitting with his costar and director in the Roxy Hotel in New York City. "It’s a word we use all the time. We use it as a marginalization — people that have interesting ideas or people that are a bit eccentric, they’re often called crazy. People with radical political ideas, they’re called crazy. It’s a way of reducing someone to unimportance. And it says a lot about how we treat people who do have genuine mental illnesses in society."

Theo, as the actor points out, fits into both categories, as a music producer — an artist — who has the ability to see things differently and create, but also as a diagnosed individual who needs treatment to be able to work, maintain relationships, and stay out of danger. Over the course of the film, Hannah tries various methods of getting Theo help, which involves not only navigating the inadequate systems our country (barely) has in place, but also trying to translate Theo's delusions, including his hearing the "lost transmissions" of the title. The movie doesn't shy away from the absurdist comedy of those delusions, which O'Brien sees as an inherent piece of the condition and of being around someone with the condition.

"I think a lot of people I know that are schizophrenic... my grandmother, she thinks she’s funny. She’s talking to the children in the walls at night, but there’s some part of her that knows that’s a silly concept, even though she believes it," the filmmaker says. "And we use humor as a coping mechanism. It was for my family growing up, about the things my grandma would say. It’s like, what else are you gonna do? It’s really hard otherwise."

Pegg mentions his own experience with depression, a topic he opened up about in an interview with The Guardian last year, but says that he "certainly had no real idea about what schizophrenia is." Before he started researching for the film, he says, "I had ideas of it, and I think they’re often misunderstood ideas that a lot of people hold about schizophrenia." Per the National Institute of Mental Health, it's "a chronic and severe mental disorder that affects how a person thinks, feels, and behaves."

For Temple, really understanding a condition like schizophrenia is about asking and listening, because no two people will experience a diagnosis the same exact way. "That’s why mental illness is so complicated to wrap your head around. But for each person, it’s so individual, like a thumbprint," she says.

O'Brien says that the friend on whom she based the film thought it important that Lost Transmissions correctly portray "how his delusions function." The audience sees, through Hannah's eyes, how Theo spirals out from being her songwriter character's playful creative mentor to someone who truly believes that he is meant to save the world and time itself. At the same time, Hannah, who's learning about her own depression, comes in many ways to understand the lucid feelings and thoughts behind those beliefs, and — though the movie does not romanticize Theo's condition — to appreciate the lopsided way he sees the world.

"What’s always interesting about a lot of delusional theory is that it does make sense," Pegg says. "A lot of the people I spoke to who have delusional thinking, their delusions had a logic to them that made sense. And I think that’s a lot of what schizophrenia is, which is that it’s the brain making sense of an overload of information and creating patterns."

The actor says he was pleasantly surprised that the movie's premiere audience reacted to moments of levity, like the scenes where his character says something inappropriate and brutally honest or asserts something ludicrous with all the conviction of a judge.

"With a normal, everyday today life and someone who’s not experiencing something like paranoid schizophrenia, sometimes you want to say those things," Temple says.

"We all feel things tapping on the surface of our behavior, underneath our regular behavior. We all get the urge to shout things and say things, and I think human beings, generally, as a species, are very f*cked up," Pegg laughs.

O'Brien says that she first thought of Pegg for the role of Theo after seeing The World's End, the 2013 sci-fi comedy he also co-wrote, in which he plays a suicidal addict who gets a lot of laughs, though the movie still plays the tragedy of his circumstances pretty straight.

"To walk that line so deftly, which Simon can do and has done differently in all his different films," she says. "I knew he would have that understanding of where to place [humor]."

But the film is as much Hannah's story as it is Theo's, and both O'Brien and Temple say that they've been in her position in real life — drawn to someone else's imagination in a very real way. The filmmaker says that she's "attracted to people that have this sort of creative fire in them, because there’s something in me that was curious and wanted to learn about it." (There's no romance or even sexual tension between the two main characters, which O'Brien says she was surprised to find was "a problem" for some people who read the script.)

But Lost Transmissions is careful not to equate mental illness with creative genius. There's a scene where an unmedicated Theo is producing a track for a band, and the mix gradually goes from something cool and beautiful to a "bizarre cacophony," in Pegg's words, "that is an absolute metaphorical sort of reflection of his mind."

Lost Transmissions doesn't wrap Theo or Hannah's narrative up in a neat bow — "We gave you an insight into what their life was and what impact they had on each other," Temple summarizes — but O'Brien still hopes it comes to some kind of satisfying conclusion.

"The role as an artist is to want to push and see things differently, and in doing that, you kind of step further away from the edge of reality and that’s what Juno’s character goes through," the filmmaker says. "Learning to step off the edge, put your hand through the fire, and still not get burned up by it."

More like this
Lauren Lyle Is Keeping The Contents Of Karen Pirie’s Bum Bag A Mystery
By El Hunt
On 'The Handmaid’s Tale,' Christine Ko Fights Back
By Gretchen Smail
At 14, Jurnee Smollett Was Taking Meetings With Missy Elliot & Lauryn Hill
By Chloe Foussianes
A New Scooby-Doo Movie Confirmed Velma Is Gay & Twitter Is Pumped
By Radhika Menon
Get Even More From Bustle — Sign Up For The Newsletter