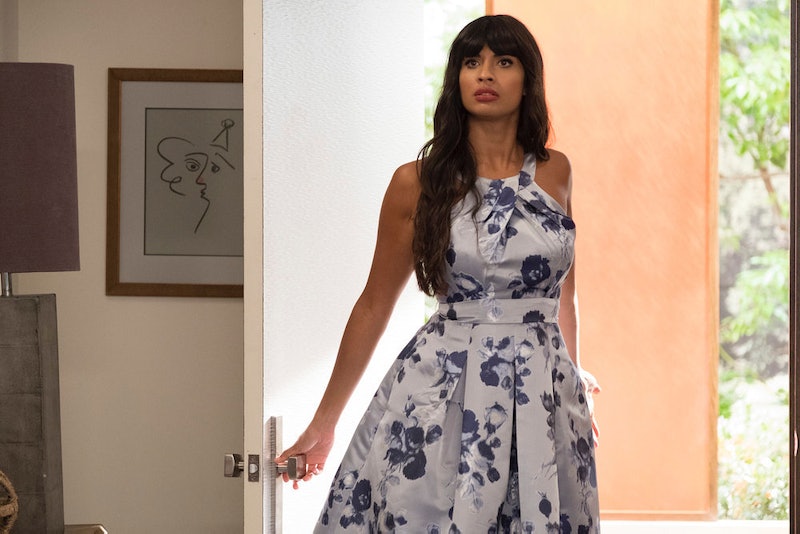 In all of Michael's torture scenarios, he never once set the group up by having Tahani realize she didn't belong in the Good Place. That's because the British humanitarian is too conceited to even consider it. Spoilers for the Oct. 5 episode ahead! However, Michael shows Tahani how she died on The Good Place during "Team Cockroach" and her death proves to her what viewers already knew — that her intentions for all the good deeds she did were actually quite selfish. Although Tahani is still far from realizing that she wasn't really that great of a person while she was alive, seeing her own death might help make her less of an insufferable person. Because while she has always felt superior, Tahani's death validates that she's actually much more similar to Eleanor than she ever realized.

With the previous episode, "Dance Dance Resolution" changing up the game by Michael offering to join forces with the four humans in the Bad Place — Tahani, Eleanor, Chidi, and Jason — it's up for them to decide if they should team up with this demon. However, Tahani is still not convinced that she's even supposed to be in the Bad Place to begin with — because, in her mind, it's unfathomable that she could end up in the same hellish afterlife as Jason and Eleanor. Due to her continued lack of self-awareness, Michael gives Tahani the memory of her death — and frankly, it may be more embarrassing (and to use Michael's word, "hilarious") than Eleanor's death.

Flashbacks to her human life before have shown that Tahani was always outshone by her sister Kamilah, so it is fitting that her death should be her literally dying in her sister's shadow. When Kamilah was the youngest person ever to be inducted into the Rock and Roll Hall of Fame (her album had only been out six months, but it was so good, they waived the 25-year waiting period), Tahani crashed the afterparty. She had postponed her relief trip to Haiti — where Tahani indicated it was more important to her to be photographed helping people rather than actually helping people — to yell at her sister. But when Tahani's stunt makes no impression on Kamilah, Tahani loses it and pulls down the giant gold statue of her sister and is crushed by it and killed.

While the universal love that is bestowed onto Tahani's sister Kamilah is enough to drive anyone mad, Tahani's death is proof that all of her good deeds were never about anything more than her pursuit of "praise and acclaim." The character of Tahani just goes to show there are many ways to be a morally bankrupt person — and that you can even be morally bankrupt while doing good deeds. Because even though Tahani did help people through her charity work and fundraising, her intentions were always self-serving. As Michael said, "You never cared about the people you were helping. You did it only for fame or status or to spite your family."

Now that Tahani has finally seen the light about her own life (ironically, by how she died) and the gang ultimately chooses to team up with Michael while receiving ethics lessons from Chidi, Tahani finally has the chance to turn herself into the good person she always believed herself to be. Sure, Tahani is still very focused on herself, but there's hope for her for perhaps the first time ever. And while she will need to overcome her narcissism and her lack of self-awareness, which might just mean it may take longer for Tahani to become good than Eleanor to become good, Tahani could end up even better than Kamilah — though, that definitely shouldn't be the point.