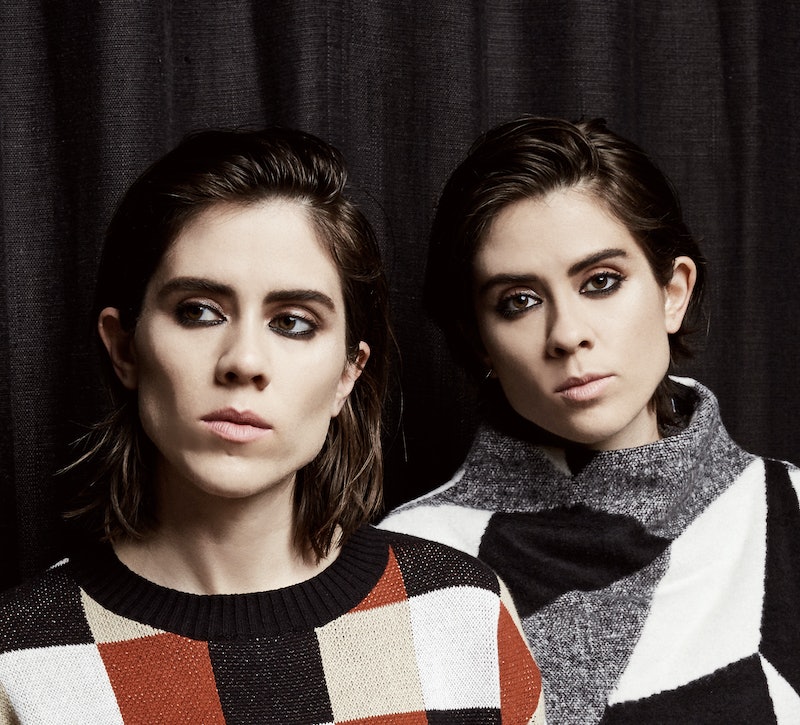 Sara Quin is a masochist. At least, that’s what she tells me over the phone days before she kicks off The Con X: Tour with her twin sister, Tegan. She’s two weeks into rehearsal for the tour, which celebrates the 10-year anniversary of Tegan and Sara’s The Con, a record she calls “a soundtrack of my misery,” and she’s starting to remember why she calls it that. “There are times where I’m like, ‘Oh my god, this is horrible,” Quin says of playing the record, which was all about the grief that comes with loss — both in love and in life. “It’s a very weird thing to write something so sad and perform it all the time. It’s a very unusual way of coping.” But, as unusual and masochistic as it may be, Quin still admits that revisiting The Con a decade later has made her realize that all the pain that went into making the record was actually worth it.

It’s a realization that’s been a long time coming for Quin, who says when she and her sister first toured behind the record back in 2007 she physically had trouble playing it. “It was actually so painful to get onstage and sing those songs,” she says, “because what I wanted to do was crumple on the f*cking stage and bawl my eyes out.”

When Tegan and Sara headed out on the road behind The Con, they were going through a “sh*tty, sh*tty time." Quin was working through a painful breakup with her common law wife, Emy Storey, who was also the band’s artistic director. This made playing songs like “Back In Your Head,” a regretful love song that has Quin wishing for a do-over, extremely painful. “I could barely play it,” she says, “because that was literally happening in my life.”

The twins were also mourning the loss of their grandmother, who was like a second mother to them. That grief compounded with the pressure of the tour was hard on the sisters’ relationship, which Quin says was “very stressed and difficult” during that time.

For eight years, Tegan and Sara had been on the road together playing for fans who were passionate about what they were doing, but The Con felt like a turning point. They had put their all into this record and it nearly broke them. Now they needed to know that all that suffering was worth it.

“In some ways playing music has been extremely helpful in helping us navigate the world and depression and grief and kind of creating an intimacy and community when sometimes we didn’t feel like we had one,” Quin says. “But, on the other hand, writing songs, it sort of puts you in this weird isolated box.”

Now, thanks to social media, the sisters would’ve known immediately that The Con was connecting with people. Specifically with those in the LGBTQ+ community who were coming of age in the 2000s and had never seen a band like Tegan and Sara on MTV before. A band that wasn’t trying to hide its queerness, but embraced it and made fans want to do the same. Seriously, look at how many people have copied Tegan and Sara’s haircuts over the last decade.

Back then, the Quins felt lonely and overwhelmed by everything that was happening around them and couldn’t see the good stuff. “There was definitely a disconnect of how other people perceived the record and that time in our lives and how we actually experienced it ourselves,” Quin admits. “I really appreciate how helpful the music or just us being so comfortable talking about ourselves has been for some people, but, I didn’t necessarily feel that when I was younger. I felt really vulnerable.”

It was that vulnerability, though, that attracted many to The Con, which Quin calls “the first fully realized Tegan and Sara record." Death Cab For Cutie's Chris Walla, who served as a producer, encouraged the pair to do what they wanted. “It was really the first time we felt truly in control of the process,” Quin says of recording the album.

What they ended up with, Quin says, was a bit of a mess, but it was a beautiful one. “People hear The Con as being as really unique and unusual and special. And it is," she says, "But, as a musician, I don’t want to make more albums that are a mess. My instinct as an artist is better."

Talking to Quin in 2017 about The Con, you notice how quick she is to give the record a compliment, only to take it away just as fast. But, there’s no doubt that this record means something special to her. “I think it was an extremely empowering time for us,” she says, “and as a result the record really resonated in a different way than our previous efforts.”

The Con wasn’t Tegan and Sara’s most commercially or critically successful record — that would come six years later with the band’s seventh album, Hearthrob. But, it gets at what Tegan and Sara do best, which is finding a way to make people feel less alone. Whether it was expressing confusion over why so many were against gay marriage (“I Was Married”) or the pain of reevaluating a past relationship (“Call It Off”), they never held back.

Tegan and Sara didn't know it then, but all that was good for something. It helped the band find their voice and they’ve used it over the years to speak out for what they believe in.

Last year, the sisters launched the Tegan and Sara Foundation, which is dedicated to raising money for causes that help LGBTQ women and girls. Every ticket of The Con X: Tour and copy sold of The Con X: Covers album, which features Bleachers, Cyndi Lauper, and Sara Bareilles putting their own spin on Tegan and Sara's album, benefits the foundation.

Looking back at all that Tegan and Sara achieved in the last decade, Quin still has a love/hate relationship with The Con. "It has sort of unearthed this weird trauma," Quin says before admitting it has made her appreciate her younger self a bit more. "I actually have really been feeling really confident," she says. "Like, 'Yeah, we were great at 26. We were writing great songs.'"

It took Quin a decade to realize something Tegan and Sara fans have known all along, but better late than never.