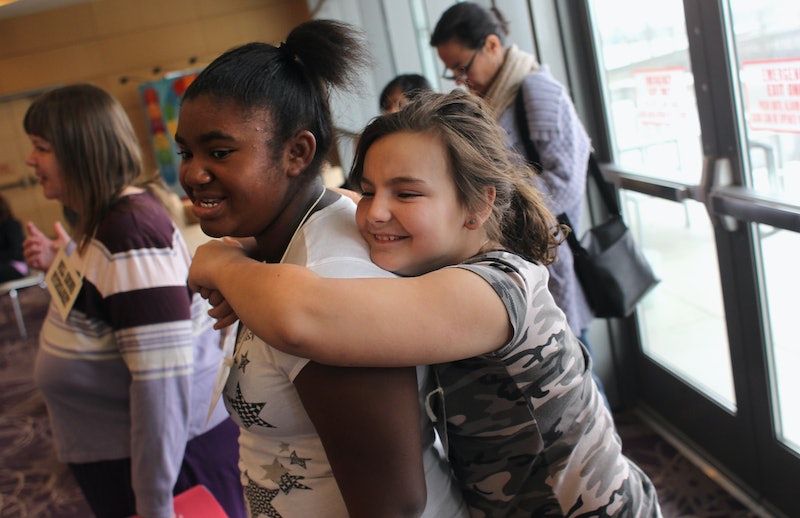 After the recent success of the controversial Netflix show 13 Reasons Why, which has been both praised for revitalizing a dialogue about bullying and mental health and condemned for "glamorizing" suicide, as Inside Edition wrote, everyone seems to be talking about teenage mental health. Everyone, that is, except many congressional Republicans. Last week, 217 House Republicans voted to narrowly pass the American Health Care Act, a bill that experts say could significantly damage teenagers' ability to access key mental health resources.

AHCA represents the Republican attempt to "repeal and replace" Obamacare, also known as the Affordable Care Act. In its current iteration, the AHCA would eliminate many of Obamacare's major provisions, including a Medicaid expansion and a ban on increasing premiums for sufferers of pre-existing conditions, which may include mental illnesses like depression and anxiety.

As much of the recent dialogue about 13 Reasons Why has reminded us, teenagers are often uniquely vulnerable to mental health issues. A recent study in Pediatrics found that rates of major depressive episodes among adolescents had increased 37 percent over the last 10 years. Leaving mental illnesses like depression untreated can cause significant harm to the sufferer and can set students up for long-term challenges.

"Unchecked mental and behavioral health issues lead to increased rates of high school dropout," Kelly Vaillancourt Strobach, director of Government Relations at the National Association of School Psychologists, tells Bustle. "It can interfere with [students'] college or career plans, it interferes with their ability to have positive social relationships. ... It increases their risk for substance abuse, for engagement in risky behaviors."

Yet for many teens, AHCA may make treatment much harder to obtain. For example, AHCA would cut Medicaid, which helps fund health care for the poorest Americans, by $880 billion, according to the AARP. Some Medicaid funding is currently given to schools in order to help provide mental and physical health services to students, and cutting that funding would potentially force schools to make significant cuts to their mental health care budgets.

"We are seeing some data from school superintendents and other administrators who make financial decisions that if they were to lose those funds for Medicaid, one of the first things, possibly, to go would be staffing, which would mean less kids could get help," Strobach says. The cuts at school services can be especially dangerous, says Strobach, because for many students, "their first access point into getting mental and behavioral health care is often with the school."

Moreover, the mental health care access problems that may be caused if the AHCA in its current form becomes law go beyond school environments. One of the key features in the ACA is the provision for essential health benefits (EHBs). The EHB provision mandates that most insurers cover mental health care, along with a variety of other services. AHCA would allow states to potentially eliminate EHBs through applying for waivers from these requirements, meaning that insurance providers would no longer be mandated to cover mental health services.

"You might see some real hesitancy on behalf of people seeking out treatment they really need, because they’re afraid that... it will cause their premiums to skyrocket and they won’t be able to afford it."

Even teenagers who do not rely on Medicaid could lose critical insurance coverage for things like therapy and psychiatric treatment. "For families with adolescents with mental illness in states that choose not to make behavioral health coverage mandatory, this would make health care more expensive – and therefore less accessible," says Emily Gee, Health Economist at the Center for American Progress. "Families or individuals would have to pay potentially thousands out of pocket for mental health care coverage and services."

One of the most widely discussed aspects of the AHCA could also be one of the most damaging for teens seeking help for mental illness: the possibility that insurers could once again charge higher rates due to pre-existing conditions, if coverage has been lapsed for more than 63 days. Pre-existing conditions include things like epilepsy and cancer but also include mental illnesses common among teens, like depression, anxiety, and substance abuse.

Strobach worries that this pre-existing condition concern might make parents less likely to seek support and resources for their struggling teens. "You might see some real hesitancy on behalf of people seeking out treatment they really need, because they’re afraid that... it will cause their premiums to skyrocket and they won’t be able to afford it," she says.

It is increasingly clear that while a healthy national dialogue about mental illness is critical for helping struggling teenagers get help, so too is a robust mental health care system.

More like this
Here’s Where The NHS Nurses’ Strike Currently Stands
By Sophie McEvoy
11 Exercises For Dowager's Hump That'll Help Your Neck Posture
By Carolyn Steber
Kourtney Kardashian’s Wellness Guru Shares Her #1 Tip For Better Health
By Taylor Jean Stephan
10 Primal Movement Exercises That'll Improve Your Mobility
By Carolyn Steber
Get Even More From Bustle — Sign Up For The Newsletter
From hair trends to relationship advice, our daily newsletter has everything you need to sound like a person who’s on TikTok, even if you aren’t.