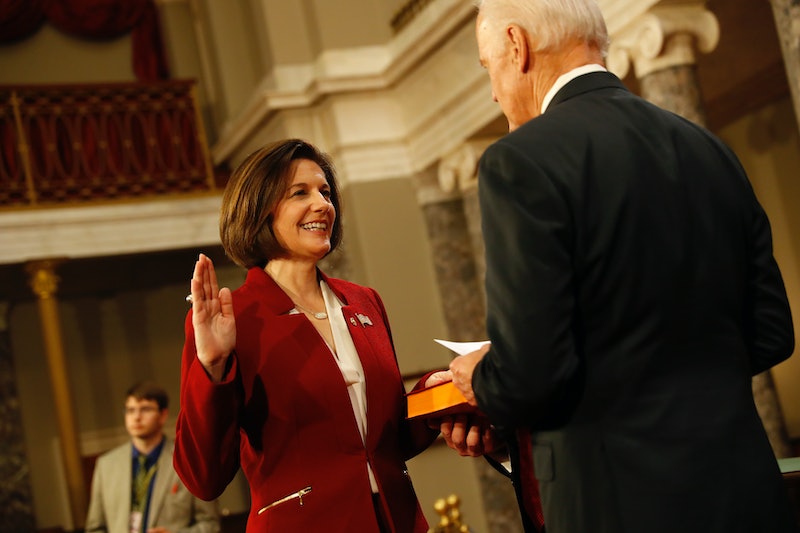 Donald Trump's presidential victory on Nov. 8, 2016 was an upsetting night for diversity advocates. However, the night was not without its silver linings — and the the election of freshman Sen. Catherine Cortez Masto was one of them.

"I'm proud to be Nevada's 1st female and our nation's 1st Latina senator," tweeted Cortez Masto, who filled Harry Reid's vacant seat, on election night. "It's about time our government mirrors the diversity of our nation."

That principle still informs Cortez Masto's work as a senator, according to an interview with Bustle's Emily Shire. As the first Latina U.S. senator, Cortez Masto personally contributes to the diversity of Congress, but the senator has taken her commitment to diversifying government further. She shared her Senate office's demographic payroll information with Politico in order to demonstrate that she seeks to employ a diverse range of people, from entry-level positions to management. Her staff, like the country as a whole, is also majority-female, even in senior positions.

Her commitment to diversity comes at a time when politicians on both sides of the aisle have been criticized for ignoring the voices of minorities and women. A now-infamous photo of Republican congressmen and White House staffers discussing the potential elimination of Essential Health Benefits like maternity care did not include any women. Even Senate Democrats were recently criticized for what Politico called "the white male stranglehold on senior staff positions" in their offices. Cortez Masto, whose Senate term began about a month after that story ran, is clearly determined to run a diverse and inclusive office.

Our country has become so beautifully diverse, and by bringing those different perspectives to the table, we are addressing the needs of many people across the country and not just a few.

Her understanding of the importance of workplace diversity stems, at least in part, from a career in which she was frequently in the minority. Cortez Masto, who served as attorney general in Nevada for eight years, tells Bustle, "I come from the world of law enforcement ... so you traditionally walk into a really male-dominated environment, so that’s nothing new for me."

The Nevada senator is also aware of the unique importance of diversity under an administration that has frequently been criticized for exclusivity and even racism. "I knew I would be walking into an administration [where] the chief officer of the country was basically in my state calling everybody criminals if you happen to be of Mexican descent," she tells Bustle. "There is no room for discrimination, hate, [or] racism in the White House."

Nevada is 27.8 percent Hispanic, according to the Pew Research Center, meaning that a large number of Cortez Masto's constituents (and Cortez Masto herself) may have unique concerns relating to the president's comments about Hispanic and Latino Americans and the implications such comments may have for policy.

Cortez Masto believes that having these unique concerns represented in Senate workplaces is critical to addressing them effectively. "Our country has become so beautifully diverse, and by bringing those different perspectives to the table," she says, "we are addressing the needs of many people across the country and not just a few."

The same is true for so-called "women's issues" — things like maternity health care and reproductive rights, which are often ignored or misunderstood when roomfuls of exclusively male politicians call the shots. "Women are 50 percent of this country. We should no longer have to fight for our health care [and[ what happens to our bodies with health care decisions," she says. "It's ridiculous to me that we still have to fight."

Cortez Masto's commitment to diversifying her staff sets an important example for her Senate colleagues. Prioritizing and improving diversity, says Crotez Masto, "should be normal part of what we do every day," adding, "I hope that by talking about it and showing that's what I'm doing on a regular basis, it becomes the norm."

More like this
24 History-Making Black Women You Probably Didn't Learn About In School
By Ayana Lage and JR Thorpe
25 Inspiring Quotes From Black Women To Celebrate Black History Month
By Kyli Rodriguez-Cayro and JR Thorpe
Zach Reveals The Chaotic 30 Minutes That Were Cut From ‘The Bachelor’ Premiere
By Grace Wehniainen
17 Valentine's Day Tips For New Couples, Straight From Relationship Experts
By Carolyn Steber
Get Even More From Bustle — Sign Up For The Newsletter
From hair trends to relationship advice, our daily newsletter has everything you need to sound like a person who’s on TikTok, even if you aren’t.