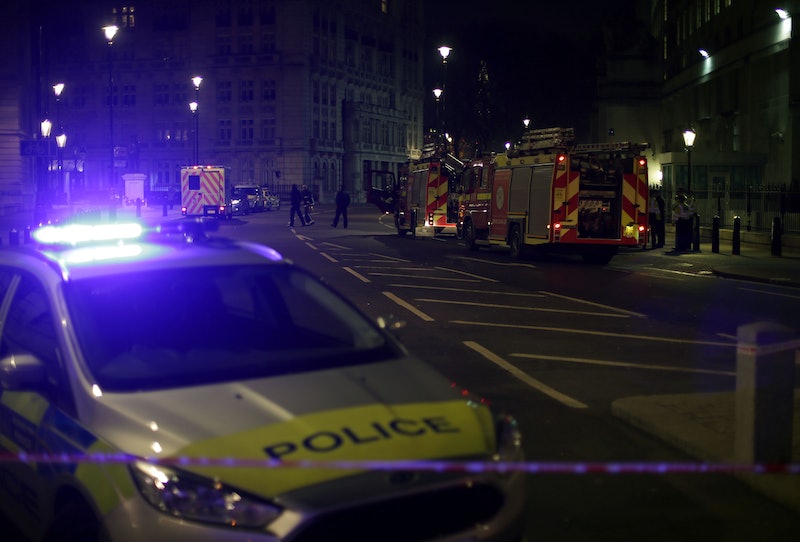 Donald Trump had only been president for a couple of hours when readers began noticing changes on WhiteHouse.Gov, the administration's homepage. Amid the now-missing issues pages regarding climate change, disabilities and LGBT rights came a singular addition: a page titled "Standing Up For Our Law Enforcement Community" that announced plans to end "dangerous anti-police atmosphere in America." The Trump administration's statement on policing sounds a lot like the #BlueLivesMatter movement's rhetoric, marking the first of many massive shifts in policy between the Obama and Trump presidencies.

#BlueLivesMatter was created in response to the so-called "anti-police atmosphere" in the United States that came out of the Black Lives Matter movement — a movement built on critiquing a seeming increase police brutality following widespread coverage of the officer-involved deaths of Mike Brown, Tamir Rice, and Eric Garner, among many others. Support for #BlueLivesMatter grew following the deaths of NYPD officers Rafael Ramos and Wenjian Liu, and soon after announcing his candidacy for president, Trump adopted a pro-police stance of his own. That stance now appears to have made it onto his administration's brand-new White House website.

Trump's ties #BlueLivesMatter increased on the night he was elected, when he thanked law enforcement officers in his victory speech — a shout-out that was then returned by Blue Lives Matter on their website.

On a number of instances, the Trump administration's policing page sounds eerily like the "About Us" section on the Blue Lives Matter website. They coalesce on two main points: a universal need for safety and comfort, and a deliberate countering of supposed "anti-police sentiment" as purported by those who support Black Lives Matter.

We will work towards relentlessly defending law enforcement from baseless attacks and work to promote the good work of police officers. Law enforcement is under attack in the media and police need a voice, so we proudly take on this role.

The overlap doesn't end there — both sites echo a need for safety versus supposed wanton acts of violence against police. WhiteHouse.Gov's policing page illustrates this juxtaposition perfectly:

Criminals who rioted and victimized innocent citizens were further given legitimacy by the media as “protesters.” America watched as criminals destroyed property, and assaulted and murdered innocent people, and they labeled these criminals as victims.

There was no doubt that major changes would be made to WhiteHouse.Gov, just as there are to be major changes made to the nation under President Trump. But the ties between the website for the highest office in the land and an organization that sees the need to pit the lives of police officers against the lives of black Americans is not what most of us expected on day one of Trump's presidency.