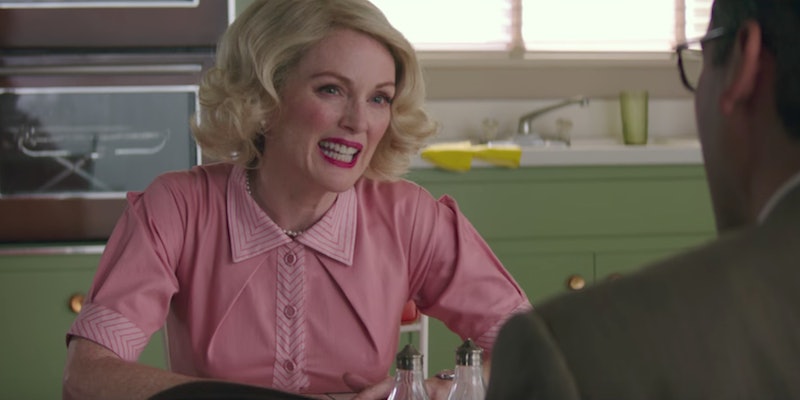 Suburbicon, a new film by the Coen Brothers and directed by George Clooney, is politically-charged, to say the least. The movie, out now, is both a satirical crime comedy and a serious tale about a Black family moving into an all-white, recently de-segregated suburb in the late 1950s. If the two stories connected more thoroughly, the movie could be a powerful commentary on racism and how white people allow it to happen even when they're not actively participating. But instead, Suburbicon has just one scene that achieves this — and that scene perfectly sums up why white feminism is so harmful to women of color.

In the scene, the movie's main female character, Margaret (Julianne Moore), is shown working as a cashier at a grocery store in town. A Black woman, who isn't given a first name but is called Mrs. Mayers (Karimah Westbrook), attempts to purchase groceries. The white male owner of the store approaches both women, and what comes next is an exchange that depicts the various systems of oppression. The man tells Mrs. Mayers that her milk costs $20, which, if you known how much milk costs today and consider inflation, is a laughable price for the 1950s. Then, when Mrs. Mayers puts away her milk and tries to buy Wonder Bread, the male store owner tells her that that also costs $20, and that she should go to another store if she wants lower prices.

Instead of calling out this blatant act of racism, Margaret simply looks on silently and smiles. She could chastise the owner or help out Mrs. Mayers — an earlier scene in the movie shows her assisting another (white) customer with an issue — but she doesn't, choosing inaction. This decision, and the scene overall, is a classic example of white feminism. Rather than supporting a Black woman clearly being oppressed, Margaret refuses to engage and stands by her boss, favoring her shared white privilege over her shared femininity.

The fact that Margaret remains passive in the face of flagrant racial discrimination is sad, but not a surprise, given the movie's context. None of the adult white characters in Suburbicon are exactly upstanding people. When the film's protagonist, Gardner Lodge (Matt Damon), finds himself in a messy situation with the Mafia, he resorts to criminal behavior and draws his family members, including Margaret, into his violent schemes. At the same time, an angry white mob forms outside of the Mayers' home, and at the film's climax (spoiler alert) the neighbors resemble the recent white nationalists rioting in Charlottesville, Virginia.

Yet despite this, and despite the fact that the Mayers' plight is based on the real-life story of the first Black residents of Levittown, Pennsylvania, William and Daisy Myers, who faced a months-long violent uproar when they moved to the all-white suburb in 1957, Suburbicon doesn't examine its characters' flaws in a deep way. Rather, it spends more of its time gratuitously featuring racist profanities and using racial and gender stereotypes as comedy. It's only the supermarket scene that actually delves deep into racism and societal attitudes, in a way that rings as unfortunately true today as it did in the '50s.

Just as the white nationalists' riots outside of Mrs. Mayers' house resemble recent riots that took place in the U.S., the unequal treatment of white and Black women shown in the movie scene is also reflected in today's society. According to the Economic Policy Institute, "In 2016, white women’s wages grew to 76 percent of white men’s, compared to 67 percent for Black women relative to white men." White women have more privilege than Black women in the U.S., and as the Suburbicon scene shows, their attitudes and actions can sometimes reinforce systematic oppression.

And it's not like Margaret walked away from the grocery store having earned herself any more power or freedom. Instead, her lack of response to the male store owner just reinforces that man's societal power, and her own lack of privilege in comparison.

There's no question that many aspects of Suburbicon's depiction of racism in the U.S. are flawed. Still, the grocery store scene involving Margaret and Mrs. Mayers perfectly demonstrates how easy it is for white women to perpetuate racism, even by staying silent. Not many of the lessons learned by the characters in Suburbicon can necessarily translate to present day life — the film is a little too absurd for that — but the message of what Mrs. Mayers' refusal to stand up for a woman being discriminated against in this one short scene means for feminism can, and should, hit hard.