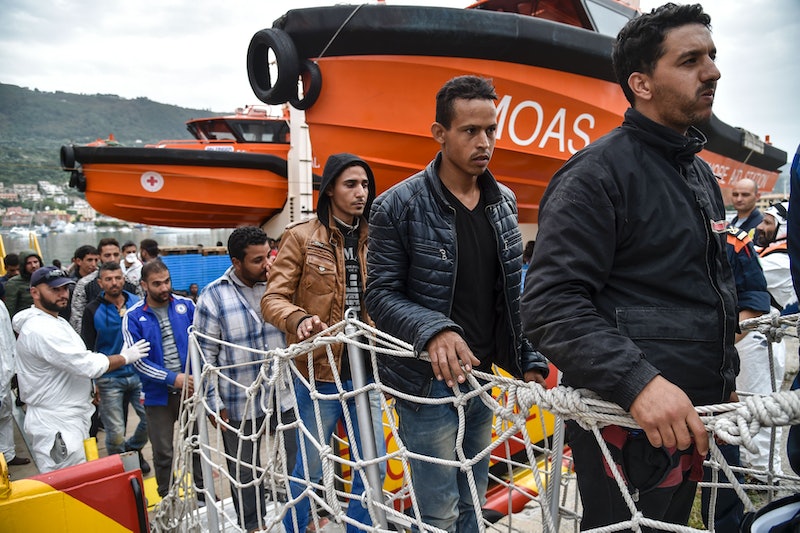 So you’re at a party, and someone says something ignorant. And while you know that they’re in the wrong, and that you could totally engage them and win if you were a bit more prepared, your words escape you. To make sure that doesn’t happen, I’ve compiled a series of handy reference guides with the most common arguments — and your counter-arguments — for all of the hot-button issues of the day. The topic this time: How to argue against Donald Trump's refugee ban.

Common Argument #1: This will help us defeat ISIS.

To the contrary, ISIS is altogether eager to leave millions of refugees hanging in limbo, abandoned by the international community, and without a home to turn to. Much more so if they're also alienated from the United States and western nations across Europe, because that makes it all the easier to recruit. In short, the U.S. taking a decidedly antagonistic attitude toward Islam and beleaguered Muslim refugees actually helps the so-called Islamic State, reinforcing its anti-American message.

This is an especially huge strategic blunder considering ISIS is already controlling an ever-shrinking amount of territory, despite the phenomenon of incredibly hard to combat, independently planned attacks carried out in its name. There's a reason why ISIS preferred President Trump to President Clinton, and policies like this are why.

Common Argument #2: It's only temporary. The media has lied about that.

That's what Trump says. And the problem is that Trump has blared a lot of lies, misrepresentations, and misdirections throughout his campaign, on almost any issue you can think of. While it's true that some outlets and people in the media have referred to this simply as "Trump's Muslim ban," that's not exactly a lie ― it just omits his promise to end the ban after "our country's elected representatives can figure out what the hell is going on."

In other words, whenever Trump feels like it, so we should just trust his judgment. But I do not trust his judgment, and his well-demonstrated authoritarian impulses ― like when he backed the use of torture, insisted the U.S. should've stolen Iraq's oil, and said the military should kill the families of terrorists, textbook atrocities and war crimes ― terrify me.

Common Argument #3: It's not about Islam, either, it's about refugees from terrorism-prone nations. The media also lied about this.

Your Response: When Trump first proposed it, it was entirely about Muslims. Here's the first line from his statement back in Dec. 2015:

Donald J. Trump is calling for a total and complete shutdown of Muslims entering the United States until our country's elected representatives can figure out what is going on.

He backtracked that when the plain unconstitutionality of this plan was pointed out to him is not to his credit. To the contrary, it merely shows what his thinking and intentions were, and how he had to change his tune to make it look right. Trump wanted to ban Muslims, but he couldn't. So now he's banning refugees from certain countries ― majority Muslim countries, of course.

If Hillary Clinton pulled a sleight-of-hand like this, she'd have been answering questions about it until Election Day.

Common Argument #4: Without borders, you don't have a country.

Your Response: And without the willingness and desire to invite in the world's oppressed and beleaguered, you don't have a country worth defending.

Like it or not, America's willingness to absorb refugees and the persecuted is one of the values that has held appeal, allure, and appreciation around the world, despite all the legitimate atrocities it's been involved in throughout the years. The dropping of the atomic bomb on Japan, say, or the illegal carpet-bombing of Cambodia, or the overthrows of democratically-elected leaders in Iran, Chile, and many others.

To do away with that principle in the midst of a massive humanitarian crisis, and one partly of America's own making ― there is likely no ISIS without the Iraq war, after all ― and in such vehement and fire-breathing terms as Trump has done, will cause incalculable harm to America's reputation around the world. Even more so than his election already has.

Common Argument #5: We should be prioritizing American safety and security.

If you believe that a president should take a maximal position on keeping Americans safe and secure from any conceivable risk, then there's lots of steps they could or should take. Vigorously funded national health care, for example, would keep a lot of people healthy and safe ― many fewer people would die from lack of care, that much is clear. And the border wall? That's hardly impenetrable enough. Why not a giant blast-proof dome encircling the entire country, to protect us from missile fire? Federally funded bulletproof vests for all? A bomb-sniffing dog on every corner, as mandated by law?

The reality is that life is full of risk and potential danger, and in the current geopolitical climate, terrorism is one of those risks. But such incidents are fleetingly rare in the United States ― 9/11 was a huge counter-example, but none of the hijackers navigated vetting as robust as what's applied to refugees. Banning them is effectively saying that protecting American lives from entirely theoretical and specifically foreign dangers (because again, native-born Americans commit more violent crimes than immigrants) should outweigh the right of millions of innocent people displaced from their homes to live their lives securely. I don't share that view.

Your Response: Refugees from Syria must first be registered with the United Nations High Commission for Refugees, which then refers them to countries which might be able to grant them citizenship. In the case of the United States, an applying refugee will have an extensive background check and reviews performed by multiple agencies: the State department, the Defense department, the Department of Homeland Security, as well as the FBI and the National Counterterrorism Center.

The whole process takes a year-and-a-half to two years on average, and out of the total refugee population, it's a tiny fraction of people who actually get in. As it stands now, the Syrian refugee population alone amounts to more than 4.8 million, according to Amnesty International, and about 10,000 have been admitted into America.

That's not to say that the process couldn't be improved ― figuring out a way to make the vetting both more thorough and less time-consuming, for example, would be great. But why that would require a blanket, loudly pronounced ban first directed at an entire religious group is unclear ― unless, of course, it's more about rank xenophobia and public displays of chest-thumping cruelty than actually improving the system.