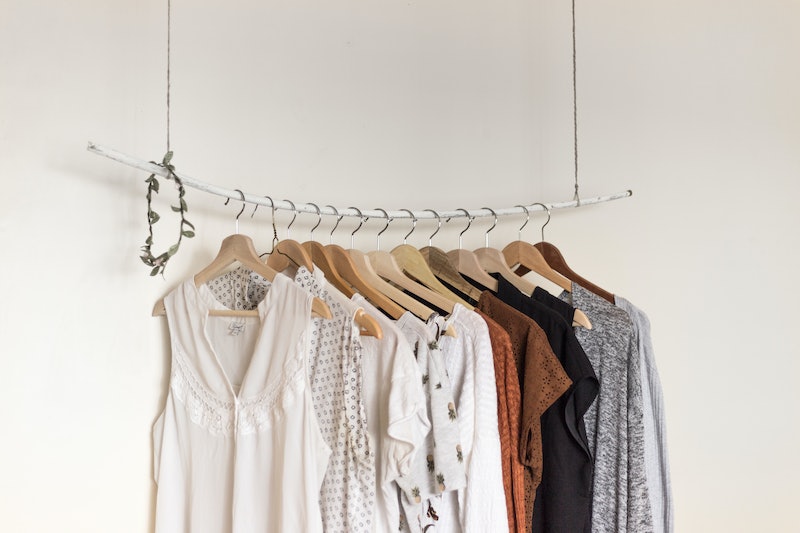 Minimalism is a trendy fashion and lifestyle movement that you've probably caught glimpses of on social media. The movement can be summed up with a simple "less is more" approach to life, which some folks take to the extreme. However, you don't need a capsule wardrobe to be a minimalist, so fashion lovers needn't worry about getting rid of their favorite designer pieces just yet.

So what does it mean to be a fashion loving minimalist? In her recent video about the annoying myths surrounding minimalism, minimalist lifestyle blogger and vegan food vlogger Jenny Mustard and her partner David, discuss the myth that you can only own a certain number of things if you're a minimalist — the popular myth being, the less you own, the better.

However, Mustard says, "So it doesn't have anything to do of how many stuff you can own or, you know, how white your apartment is...This is just like something that all of us that call ourselves minimalism, we just made this stuff up! Which means that there are no rules at all."

"You can own how many stuff you want and still be a minimalist," she elaborates, "it's more about, kind of, consciously owning stuff I would say."

But, this doesn't mean you have the green light to hoard tons of clothes, because it probably wouldn't be in-keeping with the minimalist mindset. For example, you likely wouldn't call yourself a minimalist if you had closets crammed full of clothes you no longer wear, items with the price tags on that have never seen the light of day since you brought them home from the store, or pieces you can't even remember buying. As Mustard says, minimalism is all about consciously owning stuff, rather than being surrounded by a bunch of stuff you don't even like.

Author and organizing consultant Marie Kondo, puts it simply, encouraging folks to analyze every single one of their belongings (including clothes) and decipher which "sparks joy." So if you're hanging onto your garments and accessories for any other reason — maybe an item was a gift from someone special, a piece holds memories of a particular time in your life, you believe an accessory might be useful someday, or you hope to fit into an item in the future — it's time to get rid of them if they don't make you happy at this exact moment in your life. Because what's the use of hanging on to dead weight in any area of your life, let alone your wardrobe?

It sounds pretty straightforward and can really benefit your life. Komar reports on the benefits of a capsule wardrobe, saying that it helps you understand your true style — instead of it being watered down into a hundred items, your style will be condensed into less than 40 — and you'll actually use everything in your wardrobe, so you won't feel guilty about the non-existent, never-worn pieces hanging in your closet because you'll literally be wearing everything you own on a regular basis.

However, a capsule wardrobe isn't for everyone. If you're someone whose job dictates what clothing you wear (i.e. you wear a uniform to work or you're a chef) then chances are, a chunk of your wardrobe will be taken up with just work attire. You could also be someone who works in the fashion industry, like a stylist, whose job relies on amassing a vast array of different garments. Scenarios like this complicate the capsule wardrobe somewhat; you may be wondering where the line is between your leisure wear and your workwear and whether you need to count everything altogether.

Or, you could just be super into fashion. Clothes may excite you and speak to your soul as much as a sumptuous novel does to an avid book lover. While you shouldn't let anything entirely define you as an individual — not even your clothes — it is fun to let your garments speak volumes about your personality.

The trick is not to get obsessed with the so called "rules" of minimalism, because as Mustard says, there are no rules. If a wardrobe comprised of 37 pieces doesn't make you happy, there's no point to it.

Joshua Fields Millburn and Ryan Nicodemus AKA The Minimalists, sum it up perfectly, "Minimalism is a tool that can help you focus on living a worthwhile life. It does so by eliminating superfluous items in our lives in favor of what’s necessary, beautiful, meaningful. Minimalism has allowed the two of us to focus on strengthening relationships, growing as individuals, and contributing to other people. And minimalism has helped thousands of people discover meaning in their lives. It has never been about counting stuff."

So long as your closet is filled solely with functional, beautiful items that make you happy, it really doesn't matter how many things are in there — you're still a minimalist.

More like this
These Are The Best Socks A Woman Can Buy
By Lisa Fogarty
The 5 Best Sheets For Your Purple Mattress, According To Reviewers & The Brand
By Vanessa Spilios
The Queen Will Likely Be Buried With These Special Jewels
By Darshita Goyal
How To Wear A Bucket Hat Like Rihanna, Dua Lipa, & More
By Allie Fasanella
Get Even More From Bustle — Sign Up For The Newsletter