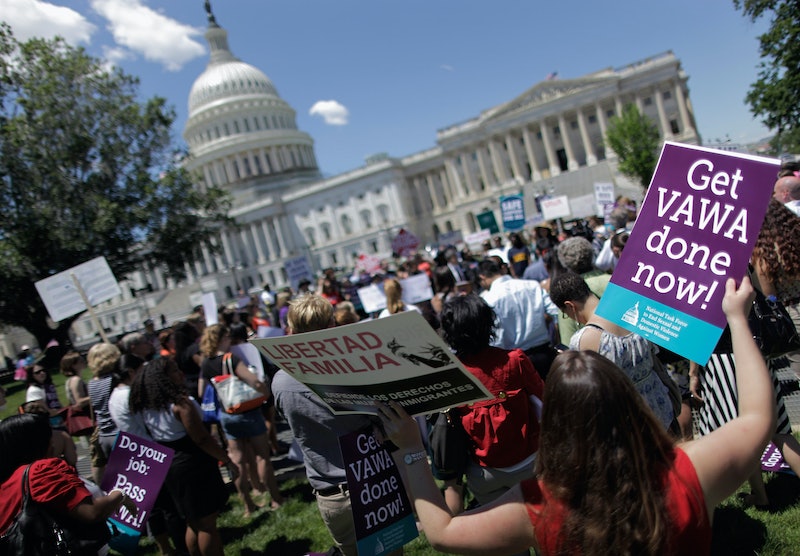 A 1994 law aimed at protecting women from violence is up for reauthorization — and the NRA isn't going to let it pass without a fight. According to The New York Times, the largest gun lobby in America is challenging a new provision in the Violence Against Women Act, which expired in February and requires a new vote to be passed into law again. In short, the bill is under attack — so anyone who wants to support it should know how to call Congress about the Violence Against Women Act.

The Violence Against Women Act, also known as VAWA, includes a number of provisions that aim to keep women safe from violent individuals and situations, especially pertaining to domestic relationships. You can read a list of those provisions from this fact sheet the Obama administration provided about it. But there's a new provision that has been added to the others, in light of the upcoming reauthorization vote. Per The Times, this new provision aims to bar anyone convicted of abusing, stalking, or assaulting a dating partner from being able to buy or own firearms.

First things first: if you want to let your House representative know how much you care about this law, you can find their office number by plugging in your zip code here.

It also couldn't hurt to call your senators' offices too, though the vote is currently only scheduled to take place on the House floor, as of yet.

If you're not sure what to say when you call your representatives in the House or Senate, you can consider using this simple sentence as a foundation: "I wanted to call and ask you to support the Violence Against Women Act, as it's a matter of incredible importance to me and countless other Americans across the country." To add to your point, you can consider sharing a relevant statistic with your representative. This fact sheet on gun violence and women by Demand Action Against Gun Violence offers up a number of statistics you can use that will illustrate the importance of passing VAWA.

The reason why it's so especially important to speak with your representative about this act in particular is largely due to the efforts being made by the NRA to keep this act from seeing the light of day. Via The New York Times, NRA spokeswoman Jennifer Baker said, “[For] many of those ‘offenses’ — and I’m using air quotes here — the behavior that would qualify as a stalking offense is often not violent or threatening; it involves no personal contact whatsoever.”

Per the publication, Baker argued that the new provision "is too broad and ripe for abuse," adding,

Like if you were sending harassing messages to somebody on Facebook, to somebody you never met or somebody you dated five years ago. How it’s written right now, you could be convicted for a misdemeanor stalking offense for a tweet that causes someone emotional distress and then you would be prohibited from owning a firearm.

According to the Gifford Law Center to Prevent Gun Violence, abused women are five times more likely to be killed by their abuser if the abuser in question owns a firearm. If this is a statistic that matters to you, tell your representative at the House to vote in favor of reauthorizing the Violence Against Women Act.