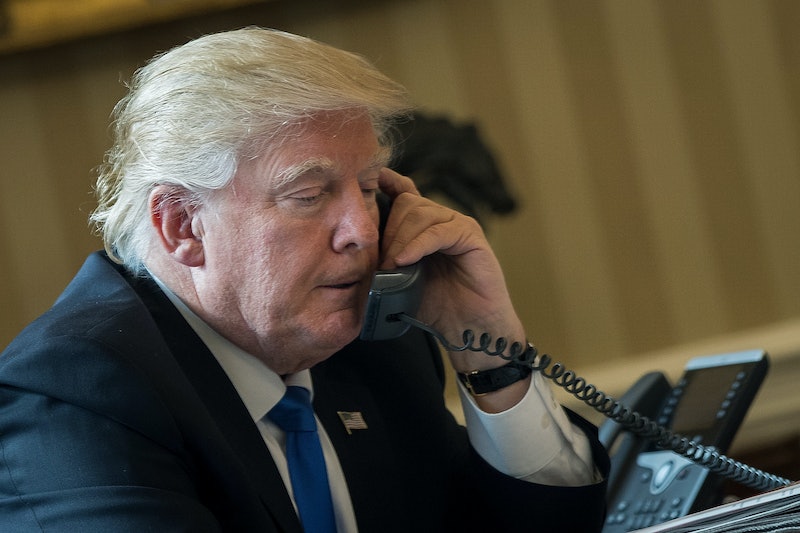 You've probably heard by now about the latest executive order to be signed by President Trump — the barring of U.S.-entry to refugees, visitors, and even green card holders from seven countries with predominantly Muslim populations. Unsurprisingly, a lot of people are getting ready to pick up their phones on Monday to let their representatives know how they feel. If you were planning to be more direct by calling Donald Trump himself about the Muslim ban, you'll have to be open to more unconventional ways of getting in touch.

These types of calls are usually made to the White House comment line at 202-456-1111. Unfortunately, the line has been down for over a week and the only interaction a caller will get is being redirected to other means of communication by a pre-recorded message. "Thank you for calling the White House comments line," the man in the recording says. "The comment line is currently closed, but your comment is important to the president and we urge you to send us a comment online at www.whitehouse.gov/contact or send us a message through Facebook Messenger."

The contact form they reference is currently working on the official White House website, but Facebook Messenger isn't activated on the White House's page. It's also not activated on Trump's page or any pages related to his campaign.

Revolution Messaging, a digital communications agency founded by members of Obama's 2008 campaign, decided these methods of contacting Trump would not do, so they created an online tool that anonymously connects users to one of the president's businesses.

"By not divesting himself from his businesses, he’s actually creating satellite White Houses all over the world," said the White House Inc. website. "That means we have dozens of phone numbers we can use to reach the president and discuss the issues that matter most... You may be asked to make a reservation or a tee-time, but tell management that until Trump steps away from his businesses for real, their property is no different from the Oval Office and you want to talk about the issues that matter most."

The tool has already garnered a lot of attention — Sarah Silverman even gave it a shoutout. A report by Teen Vogue said the response to White House Inc. was so massive that callers were having issues getting through to Trump's businesses by using the tool and that the team behind it was adding more phone numbers. By Jan. 27, over 10,000 calls had already been made through the service.

So if you're not willing to see if the official comment line gets reinstated, you now have a solid backup plan.