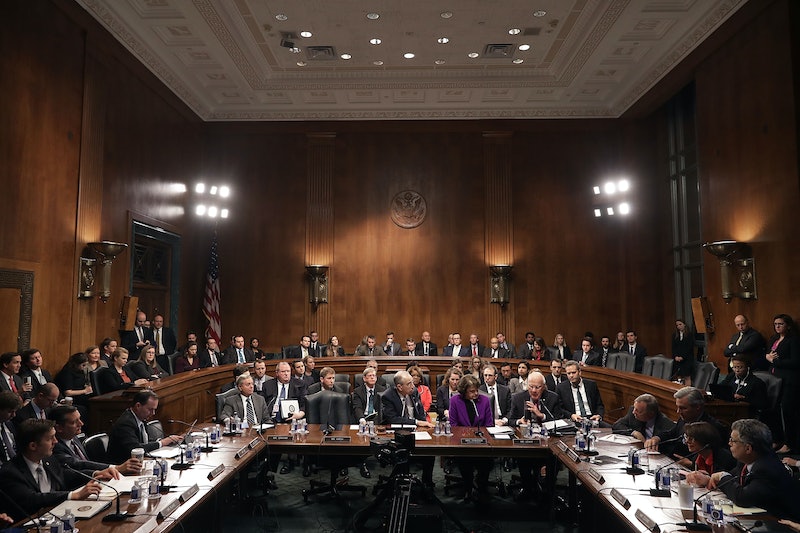 The Women's March is over, but both Monday and Tuesday were chilling reminders of why its mission must continue. Just a day after President Donald Trump reinstated the Mexico City Policy (also known as the "Global Gag Rule"), which bans foreign funds from going toward organizations that so much as mention abortion as a family planning option, the House passed another anti-abortion bill called HR 7. And whether you're insured by a federally funded plan or a private one bought through the ACA exchange, an abortion could quickly become entirely unaffordable. Before the Senate votes on the bill, calling your senator to protest HR 7 could make a world of difference.

In a statement following the House's vote on HR 7, president and CEO of the Center for Reproductive Rights Nancy Northup said what you're probably thinking right about now:

It's particularly shameful that politicians in Congress are voting to restrict a woman's ability to get basic health care services just three days after millions of women, men, and families mobilized and marched for their rights.

That's why it's more important than ever to remind your senators who they're representing. Though they may pledge allegiance to a different political party than you do, your state's legislators must still answer to you and the other women in your state who marched for equal rights on Jan. 21.

In short, HR 7 would make present restrictions on abortions even worse. Currently, the Hyde Amendment already prohibits taxpayers' dollars from funding abortions, affecting women on Medicaid and other federally-funded insurance programs. On top of that, already half of the nation's states ban abortion coverage on any ACA exchange plan. HR 7 will make the Hyde Amendment permanent and make abortions much more difficult for even private insurance companies in those remaining 25 states to cover.

It's unclear when exactly the Senate will vote on HR 7, so when it comes to calling your legislator, time is of the essence. The phone number 202-224-3121, mentioned in popular anti-HR 7 tweets such as Sophia Bush's, will connect you with the Capitol switchboard's operator. Though this is definitely an option, you may find it easier to locate your senator's phone number through this Senate.gov website. And don't be afraid to call the same number and leave a message about why you oppose HR 7 more than once.

Furthermore, you can also email your senator and send him or her letters. In fact, the Women's March's 10 Actions for the First 100 Days campaign offers directions for sending a postcard to your legislators. Its website also offers a tool that pulls up your senator's office address. All you have to do is plug in your zip code.

All in all, this process shouldn't take you more than 10 or 15 minutes and the potential impact this simple action could have for thousands and thousands of women is insurmountable. Don't let your lawmakers make decisions on behalf of you without making your voice heard.