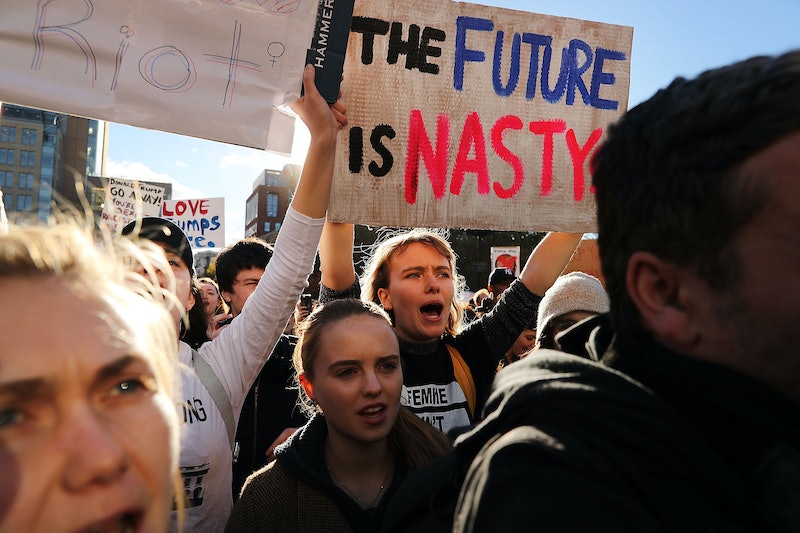 On Jan. 21, the day after Donald Trump is inaugurated as the 45th president of the United States, hundreds of thousands of women are convening on the nation's capital to show just how powerful the female voting bloc in this nation truly is. For those who can't attend the march in Washington, D.C. or their local or regional marches but still want to show their solidarity, there are other visible options. One easy way to do so is to upload a change your Facebook photo to a Women's March tribute in support of the march in Washington, D.C. and its affiliates across the country.

One of the best and simplest ways to support the women's marches is to upload an amazing piece of art created specifically for the event by someone who isn't able to attend herself. Narya Marcille, an artist and self-described stay-at-home mom, created a beautiful poster for the march that went viral after not being able to attend due to having small children to take care of. Her art gained so much traction online that she decided to publicly upload it to Facebook and allow people to use it as their profile photos to support the event from home as she did. Not only will you be supporting a great cause — you'll also be supporting an independent artist!

Marcille's amazing artwork isn't your only option for a supportive Facebook photo. iSupportCause, a website that allows people to overlay their current Facebook photos with images that represent various causes, has a Women's March on Washington profile photo overlay, so you can still use your favorite selfie while supporting the march.

Changing one's profile photo in support of causes and events went mainstream in 2015 when the Supreme Court's same-sex marriage ruling caused countless Facebook users to change or overlay their profile photos with rainbow flags in solidarity with the LGBT community. While there is some worry about "slacktivism" or passive activism when it comes to Facebook photo changes for causes and movements, it is a highly-visible way to express support for marginalized communities, or victims of tragedy.

Symbols of solidarity can be very powerful, and come in many forms — from the initial post-election "safety pin" trend to mark oneself as an ally to shops with "Refugees Welcome Here" signs in their windows, acts of visual solidarity normalize support for marginalized groups. The more people see signs in support of movements like the Women's March, the more they will know that we will not take attacks on our rights sitting down. It might not be the be-all, end-all of activism, but it certainly serves a powerful visual purpose.