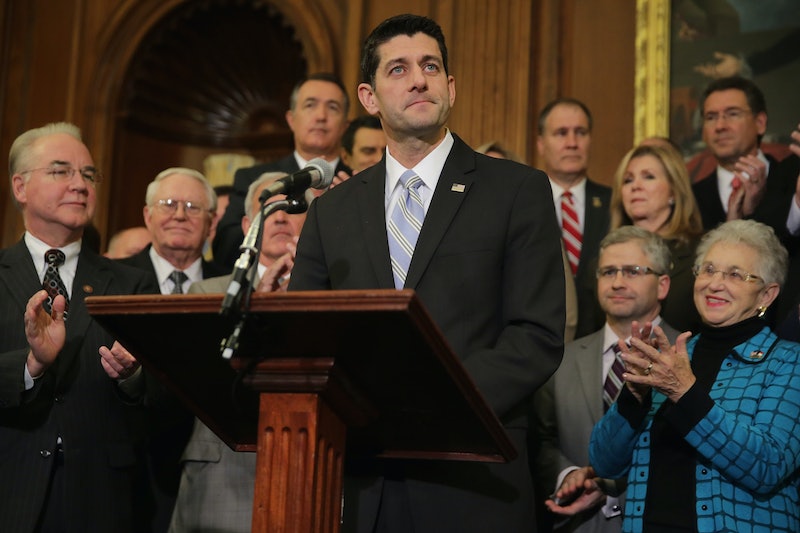 The war on reproductive health and rights continued Thursday with Speaker of the House Paul Ryan's announcement that he plans to strip Planned Parenthood of federal funding as part of congressional efforts to repeal the Affordable Care Act. If you're upset about that decision, you should contact Speaker Ryan to talk about his decision.

Planned Parenthood, which stands to lose about 40 percent of its funding if this measure succeeds, according to the Washington Post, is the leading reproductive health services provider in the United States. However, because it provides patients with legal abortions, it has long been a target of the GOP. In response to Ryan's announcement, Planned Parenthood Action Fund President Cecile Richards told CNN's Erin Burnett:

This actually has to do with denying women access to family planning and cancer screenings. What it will mean is simply people who count on us for healthcare, including thousands in the state of Wisconsin, his own state, who will no longer be able to go to the healthcare provider of their choice, which has been Planned Parenthood for many, many years.

Denying the organization federal funding can happen quickly and would have a disastrous impact on the 2.5 million people who rely on it for health care each year. But you can still make a difference and ensure your voice is heard by contacting Ryan about Planned Parenthood. Here's how you can take action.

Don't feel like dialing? Not sure what to say? There is a form on Planned Parenthood's website that, once filled out, allows them to call you and connect you to Ryan's office. That page also features a handy script you can read aloud on your call or simply use to help get your thoughts in order.

Though emails do not carry the same impact that phone calls do, they are still a way of showing that you support Planned Parenthood. You can email Ryan using the form on his speaker.gov contact page or the contact form on paulryan.house.gov.

Lastly, show your support by adding your name to Planned Parenthood's letter to Congress. Volunteers and activists paid a visit to Ryan's offices today with nearly 87,000 signed petitions in hand for the Speaker. And though the organization reports that Ryan's security detail blocked the delivery, it likely won't be the last time they show up on his doorstep with signed messages from supporters. Why not increase the impact by adding your name?

There are many ways to support Planned Parenthood. The above are just a few suggestions to contact Ryan directly. The fight to save the organization's federal funding will not be easy, but it's one worth having. Take action today to preserve access to reproductive health care tomorrow and tell Ryan that you stand with Planned Parenthood.