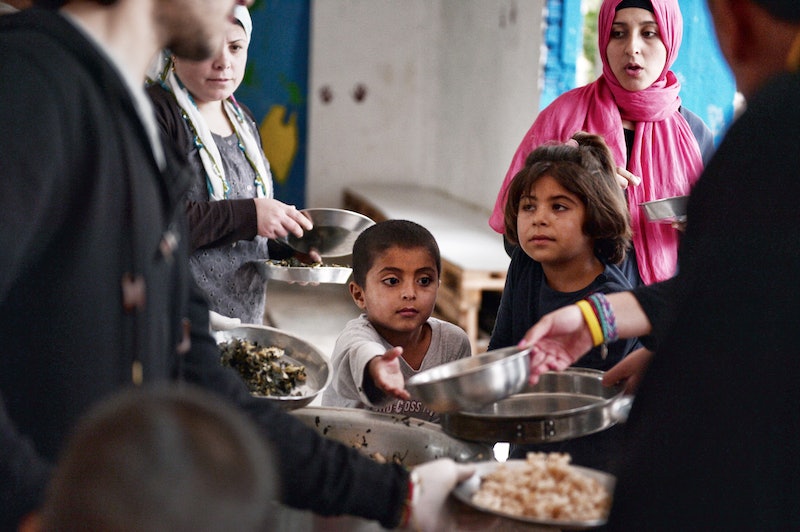 President Donald Trump is expected to make goo on one of his most controversial campaign promises on Thursday. According to a draft of an executive order obtained by the New York Times, Trump will take action to indefinitely ban Syrian refugees from entering the United States. In addition to an outright ban on people fleeing war-torn Syria, Trump's draft order, according to the New York Times, will also bar refugees from other parts of the world from entering the country for at least 120 days. But even if the president isn't willing to extend a hand to those in need, here is how to donate to help refugees.

While on the campaign trail, Trump often said that the vetting procedures for people fleeing their home country to the U.S. were inadequate, and posited that terrorists could slip into the country by posing as refugees. “We have no idea who these people are, where they come from," Trump said of Syrian refugees while on the campaign trail in September. “I always say, Trojan horse. Watch what’s going to happen, folks. It’s not going to be pretty.”

According to the draft of the executive order, when the refugee program is restored, the total number of refugees resettled in the United States would be capped at 50,000. The Obama administration had proposed allowing 110,000 refugees into the United States for fiscal year 2017.

Additionally, according to the draft order, Trump would put a temporary halt on issuing visas for people from seven predominantly Muslim countries. Reuters called the executive order a "modified version of the blanket ban on Muslims" that the president touted on the campaign trail.

Although Trump has the power to block refugees from entering the country, he has no say in what you do with your hard-earned American dollars. The United Nation Refugee Agency is accepting tax-deductible donations to provide shelter, water, food and other essentials to refugees. Additionally, several states have set up refugee services for people already in the United States. They accept both donations and goods. Check the website to see who to contact in your state.

Additionally, the United Nations Refugee Agency has a specific donation page for Syrian refugees, promising to "rush critical supplies like medicine, clean water and tents to desperate children and families – wherever they are most in need of help."

You can also aid Syrian refugees by donating to a number of groups that directly help them as they try to flee to safety. There's the Migrant OffShore Aid Station, which has led rescue missions in the Aegean Sea, Andaman Sea, and the Mediterranean Sea.

Save The Children is also another charity working to help children still in Syria, noting on its website that inside the war-ravage country, "we provide food, support hospitals, help schools to keep running and repair water systems."

Even if Trump is willing to turn his back on some of the most vulnerable people for the sake of "security," you can help the people of Syria and refugees around the world by giving to help them out. Don't let Trump's fear-mongering define America.