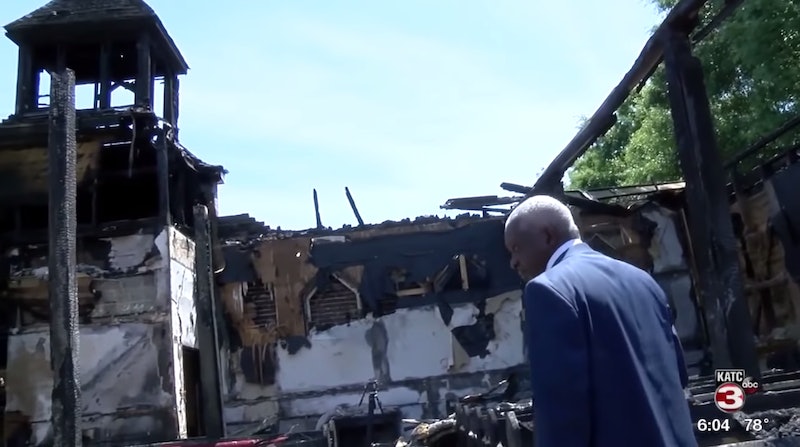 While millions of euros roll in for Notre Dame Cathedral in Paris following the devastating blaze Monday night, three congregations in Louisiana are having to work a little bit harder to bounce back financially after their church buildings were set ablaze as part of an alleged hate crime in recent weeks. Thanks to a GoFundMe, you can now donate to help the black Louisiana churches in St. Parish rebuild their buildings after the fires.

The three incidents are thought to be connected, CNN reported, and a suspect, the son of a local sheriff's deputy, is in custody for alleged arson. On Monday, he was also charged with hate crimes, The New York Times reported, citing court documents. According to the Associated Press, the state fire marshal, Butch Browning, presented evidence in court tying the suspect to the fires, including his phone's GPS location and pictures of the blazes at early stages.

"All of your generous donations will be disbursed equally among all three churches for not only rebuilding their sanctuaries, but for the purchase of all necessities lost in the fires, including pews, sound system, musical instruments, etc.," the GoFundMe reads.

A fourth fire that was "intentionally set" in Vivian United Pentecostal Church in Caddo Parish — about 200 miles away from the other three — did not cause significant damage and is not included in the GoFundMe. According to the fundraising page, the three churches this campaign is raising money for are Seventh District member churches.

The fires were denounced by Louisiana's governor on Thursday at a news conference. "I don't know what this young man's motive was, I don't know what was in his heart, but I can say it cannot be justified or rationalized," Gov. John Bel Edwards told reporters. "These were evil acts. But let me be clear about this, hate is not a Louisiana value."

President and CEO of the NAACP Derrick Johnson called the fires "domestic terrorism" in a statement. "The spike in church burnings in Southern states is a reflection of the emboldened racial rhetoric and tension spreading across the country," Johnson said, adding that such fires are nothing new. He said churches "have historically been the targets of violence" because they "served as the epicenter of survival and a symbol of hope for many in the African-American community."

The churches' fundraiser was boosted on social media by several activists and CNN's Jake Tapper — several of whom referenced the fire at Notre Dame and how quickly people had dedicated money to rebuild the Paris cathedral. On Tuesday, many of the comments left by people donating referenced the funding disparity as their reason for giving.

Rev. Gerald Toussaint reentered Mount Pleasant Baptist Church for the first time on Thursday, accompanied by a local television crew. Though he still has questions — "Why would you do this? What do you get out of this?" he said on camera — Toussaint and his congregation are ready to move on. "I’m just glad it’s over. Now, we can rebuild. I feel good. I can rest," Toussaint told KATC.

And with enough funds from the GoFundMe, they can.

More like this
Chris Kaba's Family Continue Fight For Justice After Viewing Police Bodycam Footage
By Sophie McEvoy
These 2 Women Could Be America’s First Lesbian Governors
By Tess Garcia
Adam Devine Hilariously Let Everyone Know He’s *Not* Accused Cheater Adam Levine
By Brad Witter
The Prince William & Rose Hanbury Rumours, Explained
By Frances Stewart and Sam Ramsden
Get Even More From Bustle — Sign Up For The Newsletter