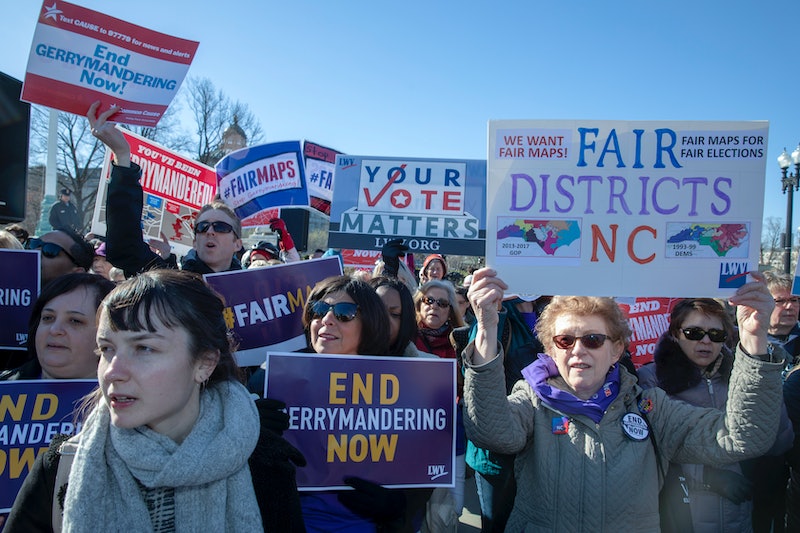 State legislatures are required to redraw voter districts once a decade, and the next deadline is looming. Politicians who are elected in the next few years will have the power to draw district lines in 2022 based on data collected during the 2020 census. If you don't want that process to be partisan, now's the time to learn how to fight gerrymandering — otherwise, you might be stuck with districts rigged by political bias for another 10 years.

Gerrymandering is when officials draw district lines to favor their own party, and their techniques have gotten more effective in recent years, Williams explains. Politicians these days can access extremely specific data about citizens' political leanings, which helps them engineer district lines that are more likely to sustain over time, according to The Atlantic. Williams suggests that gerrymandering may continue to worsen as data collection capabilities increase.

Katie Fahey, a 29-year-old who spearheaded a successful effort to restrain gerrymandering in Michigan, says that partisan districting makes politicians less responsive to voters. "I can't handle another 10 years of this," Fahey tells Bustle. She started the group Voters Not Politicians in 2016 when she felt other organizations weren't doing enough in her state.

Ahead of the 2020 U.S. Census, Williams, Fahey, and other experts spoke to Bustle about how to fight gerrymandering no matter where you live in the country.

Get Involved With An Organization

You don't need to reinvent the wheel to make a difference. Volunteer at, donate to, or even just follow groups that are fighting gerrymandering: try the League of Women Voters, Common Cause, or a "Fair District" group in your state. These organizations share useful educational content on redistricting that you can pass around, too.

If It's Possible, Fight For A Ballot Initiative

"Legislators aren't typically terribly interested in changing the rules when they're the ones abusing the power," Loyola Law School professor Justin Levitt tells Bustle. Because it's hard to pressure state legislators to fix gerrymandering, bypassing state officials is often a better bet. Some states allow citizens to directly put an initiative on the ballot if they collect a requisite number of signatures.

Fahey — who Williams describes as "the model of how public participation can make a difference" — did just that in Michigan. After the 2016 election, she published a Facebook status asking people to join her in "taking on" gerrymandering in her state. Her post unexpectedly gained enormous traction and attracted a horde of volunteers; she says she posted a nearly identical message years earlier that didn't catch on, and jokingly credits adding a smiley face for the attention this one got.

Fahey and her crew held redistricting town halls across Michigan and gathered 425,000 signatures to get an anti-gerrymandering measure on the 2018 Michigan ballot. The proposal passed with 61% of the vote last November.

If your state allows for citizen initiatives, you can do the same. Fahey's new organization The People offers resources for organizing similar projects and other nonpartisan activism.

Legislative solutions are worth pursuing, too. Williams says it would be "great" to have a constitutional amendment prohibiting partisan redistricting but that it wouldn't likely be ratified by the required 38 states.

One recent bill in Congress that both he and Levitt praise is HR 1, a package passed by Democrats in the House in March that's meant to expand voting rights and fight gerrymandering. HR 1 would strip state legislatures of the power to draw congressional district lines, and put that into the hands of independent state commissions instead, according to The Washington Post.

"It's not perfect," Levitt says, "but it's a mega-step over and above what currently exists."

Contact your senators to let them know that you support HR 1. But don't just focus on federal officials; talk to state representatives and city council members about your concerns over gerrymandering, too. Fahey notes that "mayors tend to be far less partisan," which means that they may be a more likely ally in the fight against gerrymandering, "especially if your city is being split up" among different districts.

Help Draw The Lines In Your Community

It also helps if you understand how your current district has been drawn to serve a particular collection of interests. Sometimes the impact of gerrymandering is obvious: Fahey explains that a district is "packed" when people identifying with one party are unnaturally packed together (consistently winning upwards of 70 percent of the vote), or "cracked" when they're separated to dilute the impact of their majority in an area.

"We want citizens to be able to draw their own maps," Hannah Wheelen, a data specialist at the Princeton Gerrymandering Project, tells Bustle. If you think only experts can analyze the bounds of a community, think again: "If you ask people what their community is," Wheelen says, "they generally know."

Once you know why your lines are drawn the way they are and have an idea of how they should be drawn, go to town halls and other public meetings to advocate for that.

Prison gerrymandering is also a big issue, and it happens when inmates are represented by officials in the area where they're imprisoned as opposed to where they're from. Levitt argues that this "leads to a real disconnect" between the actual residents of an area and people who are incarcerated there. Inmates, he says, often have lower incomes, include more people of color, and come from a more urban background than those in the surrounding region.

Levitt recommends pushing for legislation that counts incarcerated people as residents of their home districts instead of where they're imprisoned, as states like New York and Maryland have already done. Check out the Prison Policy Initiative, Prisoners of the Census, and some of the NAACP's work to learn more and fight for this criminal justice priority.

What happens if you do all this but officials still end up drawing a map that doesn't represent your community of interest? There's always the option of taking the map to court — last year, for example, Pennsylvania's Supreme Court stepped in to redraw its extraordinarily gerrymandered districts. But few people have the time or financial capability to do that.

Fahey recommends talking to the officials who designed or voted on the gerrymandered map and "asking for the justification." She says to record that conversation if possible, ask the question in a public setting, and draw attention to the issue on social media. "Make sure everybody remembers who was leading the charge to draw the lines that way," Fahey explains.

Help Out With The Census

The accuracy of the data that'll be used to redraw lines in 2022 depends on the 2020 U.S. Census. Everyone — whether or not they are a citizen — needs to be counted to ensure a fair distribution of political power and funds. The government hires an extremely diverse range of people for "Complete Count Committees" to help facilitate the census around the country, and you can join one.

The census is "the biggest peacetime mobilization that we do as a country," Levitt says. "It's the equivalent of mobilizing for war every 10 years. ... It's a very big deal and it's not just done by the government, it depends on citizen participation to work."

Remember: You — Yes, You — Are The Best Person For This Job

You don't need to be an expert to do any of this. "My background was in waste and recycling," Fahey tells Bustle. She learned how to do this work simply by doing it, and she still feels imposter syndrome "all the time, every day."

If you want educate yourself more on gerrymandering, there are plenty of informational resources out there — check out The Redistricting Game, Gridlandia, the Brennan Center for Justice, Fair Lines America, or any of the organizations mentioned above. Just don't let yourself feel too intimidated to take action. "I deserve to be here because I am a citizen," Fahey says she reminds herself.

"Clearly, the people who have been 'in charge' of this haven't been doing anything to correct it," Fahey says. "Not only can we do this, but really we have to. Because no one else is coming in to save us on this one."