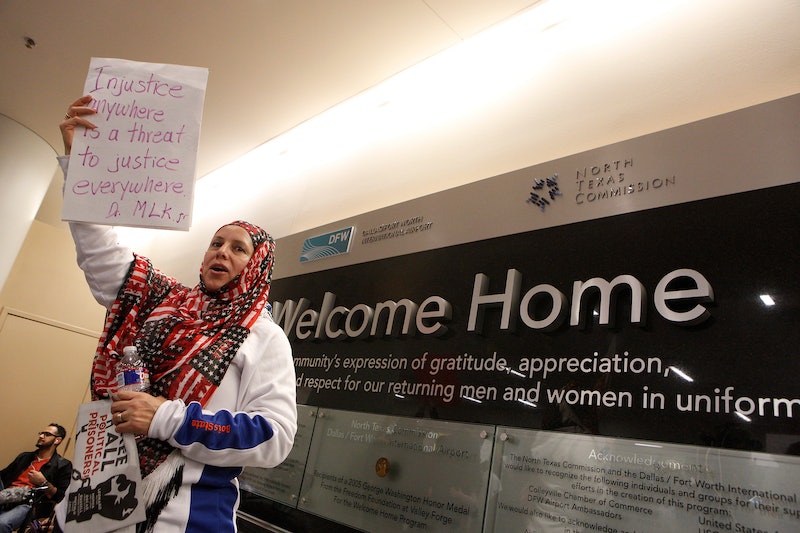 National outrage against Donald Trump's latest executive order banning refugees and people from select Muslim-majority countries has sparked protests across the United States. Since Friday, when the ban went into effect, thousands of citizens have joined the fight to help migrants and legal residents enter the country, and the protests aren't over yet. Here's where you can protest Trump's refugee ban, because the resistance isn't over until the ban is gone.

According to journalist Igor Volsky, protesters are gathering in at least 40 locations across 16 states and Washington D.C. to voice their concerns about the ban (other sources report that it might be as many as 45 or 50 protest locations). Some are following the trend of meeting at local airports, where some people affected by the ban are currently being detained. Other protest groups are marching in front of government buildings or in local parks.

Many lawyers have gone to airports with the specific purpose of trying to help the refugees, legal residents, and visa holders access legal help, so if you have any legal expertise, your presence might be most impactful there. Although the legal logistics of the executive order are still very unclear, some lawyers have found success in getting affected people released from detention. If you can't help with the legal proceedings, that's obviously alright too — just get out and protest wherever you can to let immigrants know they are welcome in this country.

If you do attend a protest and interact with the police, remember that any public property, like sidewalks, streets, and parks, are publicly available for demonstrations without permits. Try to avoid overflowing onto private property if your protest becomes too large, because then you have grounds to be arrested for trespassing. Here are some more tips for protesting safely and legally, as well as some for protesting with your kids if you have them. The very goal of the protests is inclusivity, so nothing should stop you from attending if you're willing and able.

Fighting back against Trump's fascist orders is the responsibility of all American citizens. This refugee ban is the very antithesis of American values, and the integrity and security of the country rely on seeing it struck down. Trump's actions are hateful and scary, but the best way to mitigate that fear is by speaking out against the hate. Protesting empowers you, the innocent people affected by the ban, and the larger movement, so don't hesitate to join if you can.