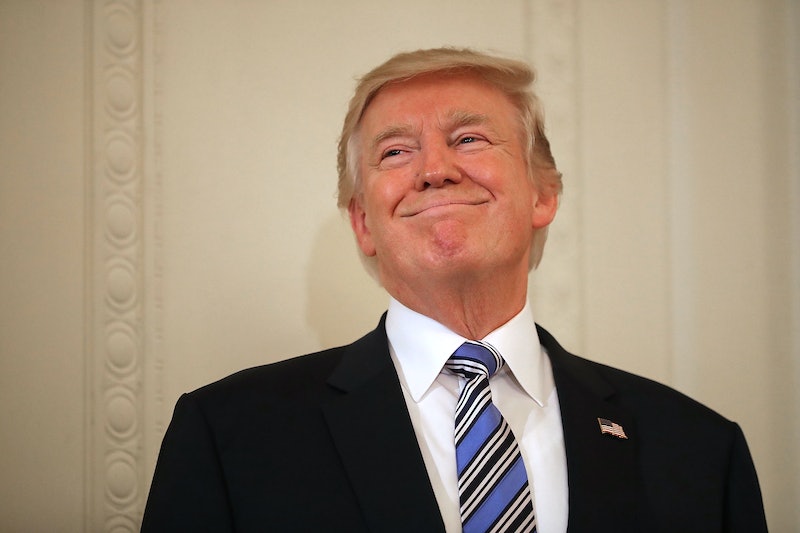 Getting blocked on Twitter by the President of the United States is perhaps the most 2017 thing to happen in the bizarro, garbage, unending year that is 2017. The list of people who have been blocked by Donald J. Trump continues to grow quite literally every day, often for reasons so comparatively innocuous it’s hard to say why and when he chooses to do so.

Model, TV Host, and our collective imagined future self Chrissy Teigen was blocked by Donald Trump on Twitter earlier this morning. Teigen joins Trump’s now infamous block list that includes celebrities, journalists, and other everyday citizens alike. Trump has even blocked Rosie O’Donnell, someone who he’s publicly berated so frequently his disparaging remarks made their way to a 2016 GOP presidential debate. Blocking someone you’ve called “dumb”, a “loser”, and repeatedly fat-shamed is like punching someone and then calling the cops because you’re worried they’ll hit you back. It’d be like cyber-bullying someone while simultaneously starting a campaign to combat cyber-bullying. Ahem ahem. (Excuse me, I had some irony in my throat.)

While some are wearing their “@realDonaldTrump blocked you” messages as a badge of honor, some aren’t taking it so lightly. A group of Twitter users who’ve been blocked by Trump have filed a lawsuit against the President and two top White House aides. Suing someone for blocking you on Twitter would be silly if that someone were pretty much anyone other than the President of the United States. The lawsuit seems to have some legitimacy, especially since multiple members (and former members) of Trump’s closest staff have referred to Twitter as a “very powerful way for him to communicate and connect directly with people.” Twitter is Trump’s apparent preferred method of communication. So, blocking citizens from seeing those “powerful” messages could be a violation of their First Amendment rights.

Being blocked on Twitter by Trump seems freeing to some extent. While there is no true escape from the hellfire of our current news cycle, perhaps there is some momentary bliss seeing slightly less 140-character vitriol. There would certainly be something satisfying knowing that Trump or a member of the White House administration would have to read your Twitter handle, Rihanna references and all, in order to block you. Please, take a moment of solitude to picture Donald J. Trump saying, out loud, something like, “You, @BoogerSalad696969, are blocked from my good, good tweets.” (P.S. You’re welcome for that Twitter handle which is still very available.)

If you, like me, are somehow still privy to the aforementioned good, good tweets of our President, perhaps you should take heed of the things other people have done to get blocked. Or maybe just do them too so we can all be blocked and never have to see his tweets again. Here are ten ways to apparently get blocked by Donald Trump on Twitter.

1. Tell Him That Nobody Likes Him

2. Write A Scary Novel About A Clown And Hope He Takes It Personally?

4. Be A Vocal Citizen

Twitter user @daBookdragon was one of multiple people to be blocked by Trump on Twitter long, long ago when he was just president-elect.

5. Call Him A Leaker (lololol)

Signore was blocked after posted in the above tweet.

7. Ask Him To Condemn A Hate Crime

Twitter user @jordansdiamonds tells the Boston Globe he believes he was blocked after he called out Trump for not speaking out after two Portland men were fatally stabbed after trying to stop an anti-Muslim rant.

8. Hurt His Fee-Fees Just A Little Too Good

Kalb, current writer for Jimmy Kimmel Live and The New Yorker, has some Trump tweets that deserve a Nobel Prize.

9. Ask Him To Clarify What “Make America Great Again” Means

10. Write A Piece About How To Get Blocked By Him, Probably?