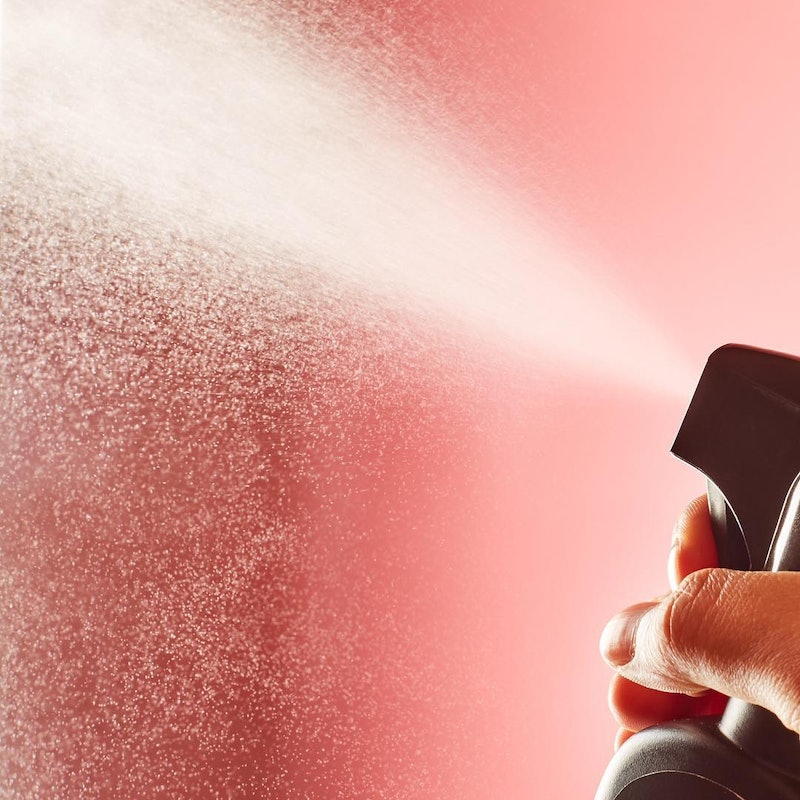 For Lushies (the moniker of Lush Cosmetics fans), it's no secret that the United Kingdom's selections from the handmade beauty brand are different from those in North America. Now, though Lush Fragrance Sprays seem to be heading stateside according to a cryptic Instagram and Facebook post from the brand, and fans will be stoked about the new update, and the fact that Lush is clearly listening to what their fans love and want to see head over to this side of the pond.

On Friday, the Lush Cosmetics Instagram page and Facebook both posted an image of what certainly seems to be one of the brand's body sprays. Not only is there a very clear and obvious spray bottle pictured, but the bottle itself looks almost identical to ones fans have seen before because some are for sale right now. Currently, the North American Lush website offers four body sprays in Rose Jam, Twilight, Dirty, and Dad's Garden Lemon Tree. These sprays? Well, they all look exactly like the bottle in the image.

In other clues to what's coming, the brand explained that these hot new launches are actually existing products that were well-loved in the UK, and have been fawned over since February. Want to know what debuted in February from Lush UK? According to the Instagram, it was body sprays scents. Coincidence? Definitely not.

Now, the question is what three iconic Lush smells will be coming and when you'll be able to get your hands on them.

Lush isn't giving much away, though. No release date has been announced, but they are letting Lushies know that they can get a head start on shopping when they do drop. The brand wants fans to head to their website now and sign up to be notified of when these mystery sprays hit internet shelves. Those who do will be the first to know when they can snag them for themselves.

You'll definitely want to sign up, too. According to the brand, the sprays will be extremely limited edition launches. They're only available for a short time and only while supplies last. If you're interested in smelling like a Lush store (and who isn't?) head to the brand's site now.

What about the scents? That's very much so up in the air (no pun intended). Lush is keeping that information under wraps, but if you head to the Lush UK website, you can get a glimpse of some of the body spray scents they have available. Some of the scents overlap, but there are also some that the states don't have including Plum Rain, Love, Uptown Funk, Self-Esteem Machine, and The Olive Branch.

How do Lush fans feel about the mystery announcement? Good. They feel good. Plus, they've also got some theories of their own.

They're letting their wishes be known loud and clear.

Some are hoping for scents that aren't currently available in the UK as well.

They certainly have favorites.

One name that seems to be popping up in the comment section more than others is Honey I Washed The Kids.

Only time will tell what does end up coming from Lush, but it's clear that not only have they been listening to what their fans love but they're actively working to bring it to more Lushies around the world.

If you want to be in on the Lush Body Spray action, head over to the brand's website now and sign up to be notified. With a limited release and a sale that'll only last while supplies do, you'll definitely want to be first to know.