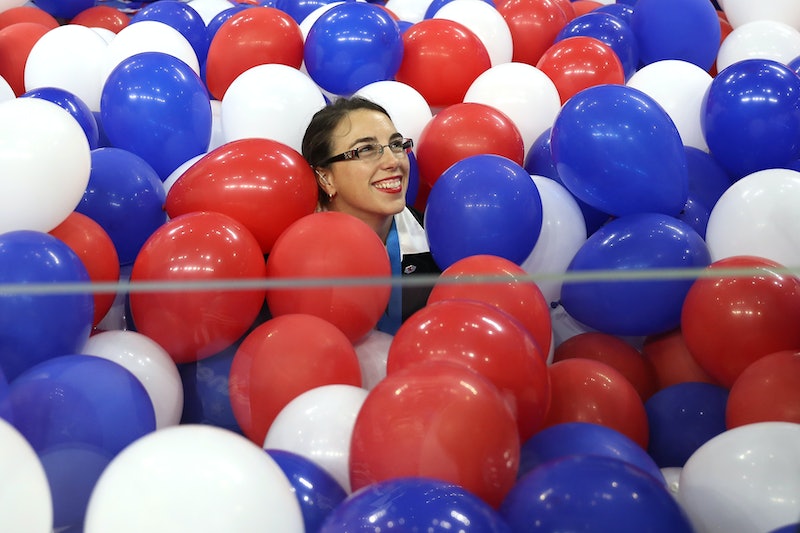 The much-anticipated 2020 Democratic National Convention will kick off on July 13 in Milwaukee, Wisconsin. As the event approaches, you may be wondering how to get tickets to the 2020 Democratic convention. Unfortunately for political enthusiasts, very few convention tickets are available to the general public — though there are still other ways you can get involved in the history-making event.

Jason Rae, the secretary of the Democratic National Committee (DNC), told Fox News back in March that "there are very limited guest passes" available for the convention, which is hosted by the DNC. While the process for securing 2020 convention guest passes isn't yet clear, it will likely look similar to those of conventions' past.

BurntOrange Report, a progressive political news site, explained that, during the 2012 Democratic convention, delegates entered potential guests' names into a drawing for guest passes during each day of the convention and guests who were selected (around 10 to 15 per day) were able to attend that day's events. So, it seems like you need to have a relationship with a delegate to even have a shot at a convention guest pass — and there doesn't appear to be any way to purchase tickets. In fact, Rae told Fox News that the convention isn't the type of event where you can " ... go and buy tickets."

Fox News noted that, while around 50,000 people will likely attend the festivities, invitations are primarily distributed to groups of people that don't include the general public — such as media professionals, elected officials, speakers, delegates, and more.

If you don't fall into one of these categories and you still want to be near the action of the 2020 Democratic convention, there are a few ways you can try to make this happen. The city of Milwaukee and the DNC are seeking thousands of volunteers and workers to carry out a host of activities related to the convention, Patch.com reported. In fact, during a press conference announcing the convention's location, Milwaukee's Mayor, Tom Barrett, said that the city is searching for around 12,000 people to donate their time to help make the convention a success, the Journal Sentinel reported.

Fox News noted that, while not all volunteers will be directly involved in activities inside convention venue, the Fiserv Forum, some certainly will — and others will still be very involved in convention activities. If you're interested in signing up to volunteer for the Democratic National Convention, you can do so via a form on the event's website. Moreover, the convention is also seeking paid employees to help prepare for the event — and you can submit a resume and cover letter online if you're interested in this opportunity as well.

The Democratic National Convention is set to occur over three days, from July 13-16, 2020. As CNN reported, the Democratic party likely chose the city in a bid to help appeal to some of Wisconsin's voters, particularly after the party lost the electoral vote in the state during the 2016 presidential election.

During the convention, the Democratic National Committee will nominate the party's 2020 presidential candidate, who will run against the (presumed) Republican candidate, President Donald Trump. Presently, there are well over a dozen Democrats in the presidential race, which means, at this point, the nomination seems within anyone's reach. If you're hoping to witness the nomination experience firsthand, be sure to explore some of the many convention job and volunteer opportunities available to the public.