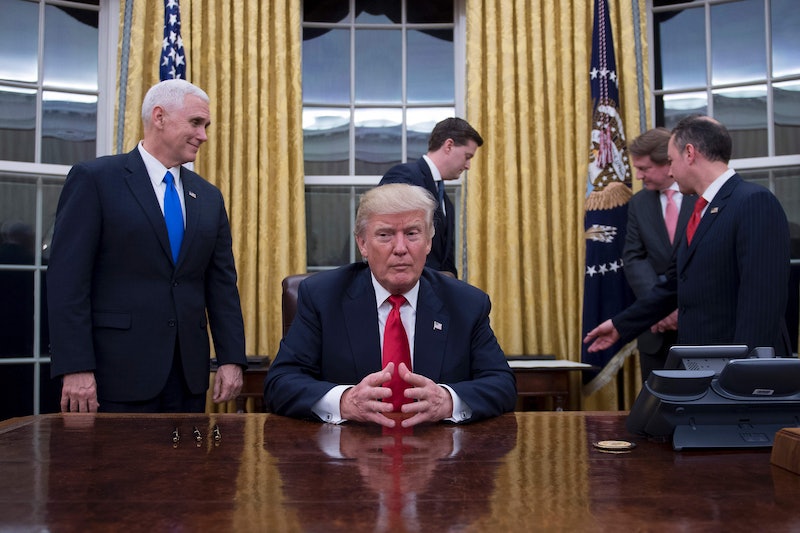 It was never any secret that the outcome of the 2016 presidential election could've ultimately decided the fate of the Dakota Access Pipeline. While progressives can fairly argue whether a President Hillary Clinton would have pushed it through ― her campaign was pretty reluctant and hands-off on the issue ― it was pretty obvious what a President Donald Trump would do. Namely, exactly what he did on Tuesday, signing an executive order restarting the project. And so, you might now be wondering: How can I help fight the Dakota Access Pipeline?

After months and months of protest under incredibly adverse circumstances, including being bombarded with tear gas and water cannons in the freezing winter, to call this news discouraging for opponents of the DAPL with be a huge understatement. According to Reuters, the Standing Rock Sioux tribe intends to fight Trump's executive order in court.

Still, in the event that construction goes forward at Standing Rock once more, there are some concrete steps you can take to try to make a difference.

Make A Donation To Standing Rock

Much as with the last round of DAPL protests, assuming it comes to that, you can and should always consider making whatever donations you can, whether financially or in the form of essential goods. Fortunately, the weather should start warming up in the months to come, so if the situation calls for massive civil disobedience like before it shouldn't be quite as frigid for a while, but resources and finances are always essential. Perhaps the simplest way to achieve this end: you can make a donation to the official anti- DAPL donation fund, run by the Standing Rock Sioux tribe itself.

Call Your Member Of Congress, Especially If They're A Republican

Given that the DAPL is being restarted via executive order, and given the GOP's long-demonstrated prizing of oil production above virtually any environmental or humanitarian concern, this isn't likely to change anything on its own. But it's important that Republicans in the House and Senate feel pressure about backing Trump and his agenda every step of the way for the next four years, and flooding their districts with phone calls politely yet firmly stating your opposition and condemnation is a big way to ratchet-up the pressure.

Head To Standing Rock To Join The Protest

Needless to say, this only works if you have the money, the personal independence to drop everything else for a while, and the physical ability to withstand whatever perils you might meet. Make no mistake, participating in the DAPL protests of last year was a stand of considerable physical courage, and many people suffered greatly for it. As such, it's important that you exercise your own best judgment before actually traveling to join any future protests, if they indeed happen.

Don't Stop Talking About It

Whatever you do, don't let it fade into the background. To the contrary, keep the conversation about what's happening at Standing Rock alive, both in conversations with your friends, family, and on social media. Because it'll be very difficult to keep awareness focused on any single issue throughout the next four-to-eight years under Trump. There figure to be daily, weekly, and monthly outrages constantly on offer, things that will bump any future DAPL protests out of the news ― unless activists and protesters refuse to allow it. Basically, the kind of committed, teeming attention being paid to the story that was seen on social media throughout 2016 is exactly what needs to continue in 2017.