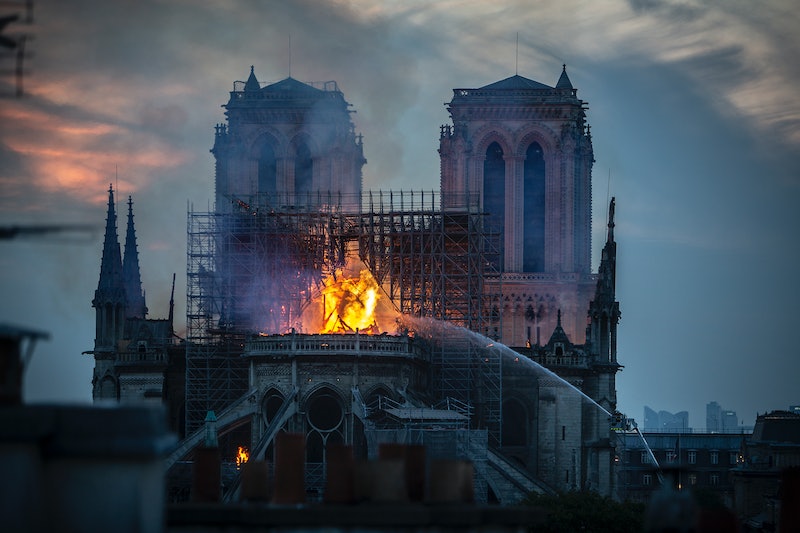 On Monday evening, Notre Dame — one the most iconic buildings in Paris, and in all of France — was partially destroyed in a massive blaze. The cause of the fire is still unknown, but, sadly, it engulfed some precious stained-glass windows, wooden interiors, parts of the roof, and, later, one of the cathedral's spires. Luckily, however, fire firefighters managed to save the exterior stone structure. People are still reeling from the tragedy of seeing this beautiful building surrounded by smoke and flames, but, if you are looking to contribute to the restoration efforts, here's how to help Notre Dame.

Notre Dame was built under the reign of King Louis VII in 1163 and was completed in 1345, taking nearly 200 years, according to the New York Times. Some of the cathedrals most popular features are the gargoyles situated outside and the "relics tied to Jesus" that were kept within Notre Dame, writes the BBC. The UNESCO World Heritage site, which has been the subject of popular culture for centuries, is also one of the most notable examples of gothic architecture, a style that began in Northern France around 1140, the V&A explains.

French President Emmanuel Macron has already announced an international fundraising scheme, saying on Monday night: "I am solemnly telling you tonight: this cathedral will be rebuilt by all of us together." The French government is yet to give any more detail on the fundraising scheme.

According to the BBC, billionaire François-Henri Pinault, the CEO and chairman of the French luxury goods company that owns Gucci and Yves Saint Laurent, has pledged to donate €100 million (around £86 million) into rebuilding the 850-year-old cathedral. And a second billionaire, Bernard Arnault, whose company LVMH owns Louis Vuitton and Sephora, has pledged to donate an additional €200 million (around £173 million).

A statement from the Arnault family said:

"The Arnault family and the LVMH group would like to show their solidarity at this time of national tragedy, and are joining up to help rebuild this extraordinary cathedral, which is a symbol of France, of its heritage and of French unity."

As far as money is concerned, there seems to be more than enough to rebuild the famous cathedral now — but if you want, you can still donate. A private french charity dedicated to saving french culture, Fondation du Patrimoine, has appealed for donations via Twitter, saying:

"Call for donations to help rebuild Our Lady of Paris, Notre-Dame cathedral, after the brutal fire that has partly destroyed it. The Fondation du patrimoine is a private organisation dedicated to saving french cultural and natural heritage."

And French Heritage Society has also set up a Notre Dame Fire Restoration Fund saying they have "established a fund to accept donations for the restoration work that will be necessary as a result of the devastating fire at the Cathedral of Notre Dame in Paris."

Sadly, the cathedral was already in the middle of a £5.1 million renovation prior to the fire to restore the building from damage over the centuries, according to the Independent. It's likely much more money than the original restoration fund will be needed to get the cathedral running again.

It's a heartbreaking day for France, but luckily a lot of the cherished items in the cathedral were rescued, the Guardian reports. The bells are thought to be safe and one of the most revered relics, The Holy Thorn Of Crowns, was rescued from the blaze. The grand organ (which has 8,000 pipes) has also been taken to safety. Hopefully the Cathedral will be restored to its former glory.