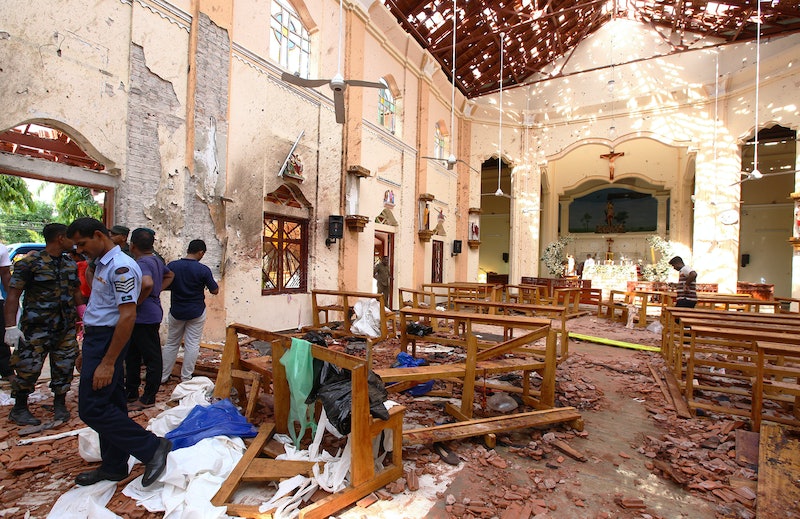 The deaths of at least 290 people in a series of coordinated explosions at churches and luxury hotels across Sri Lanka on Sunday have left many looking for ways to help those impacted by the deadly violence. But in times of tragedy, it can be difficult to know how you can help when thousands of miles and an ocean separate you from those impacted. The truth is, you don't have to be on the ground to lend a helping hand. In fact, there's more than one way to help the Sri Lanka bombing victims from afar.

Government officials have characterized the string of Easter Sunday bombings that targeted churches and hotels in three Sri Lankan cities as a terrorist attack coordinated by a local group of religious extremists, The New York Times has reported. However, according to the paper, no organization has come forward to publicly claim responsibility for the bombings. As Sri Lanka continues to grapple with the aftermath of Sunday's bombings, a number of organizations have come together to support victims and their families.

The Sri Lanka Red Cross Society is raising funds to aid their efforts to help those impacted by the bombings. Per its official Twitter account, the organization has been, among other things, facilitating a blood drive, meeting with victims at Colombo National Hospital, and is working to help connect friends and family who've been separated in the tragedy.

On Monday, Jagath Abeysinghe, the president of the Sri Lanka Red Cross Society, said that people's willingness to help was a message more powerful than any hate-fueled terror attack. "Despite the carnage there was hope," Abeysinghe said in a statement shared on Twitter. "When people heard that there was a dearth of blood at the blood bank I saw people from all faith, creed, cast, religion, and beliefs line up in that same line to donate the same kind of blood that runs in us all. That message was more powerful than any terrorist or their beliefs ... and that should be what we take away from this horrific incident."

Donations are also being collected by Kind Hearted Lankans, a local charity organization working on the ground in Negambo, Colombo, and Batticaloa to supply emergency assistance to victims and the hospitals treating them. "We are currently collecting donations to help both the victims of the tragedy and patients who were already in hospital that have given up their beds for the more needy," the organization said in a statement posted to its official website.

The group has established a GoFundMe campaign in an effort to raise funds for the purchase of various emergency items urgently needed by overcrowded hospitals. According to Kind Hearted Lankans' GoFundMe, the group plans to buy towels, sleeping mattresses, bed linens, clothing, and toiletries and personal care items. Those interested can follow their aid efforts via the group's Instagram.

As the situation in Sri Lanka continues to unfold, more organizations will likely step up to assist victims and their families, providing even more opportunities to help. Take the time to verify whichever organization or charity you decide to work with to ensure your efforts go directly to aiding those most in need.