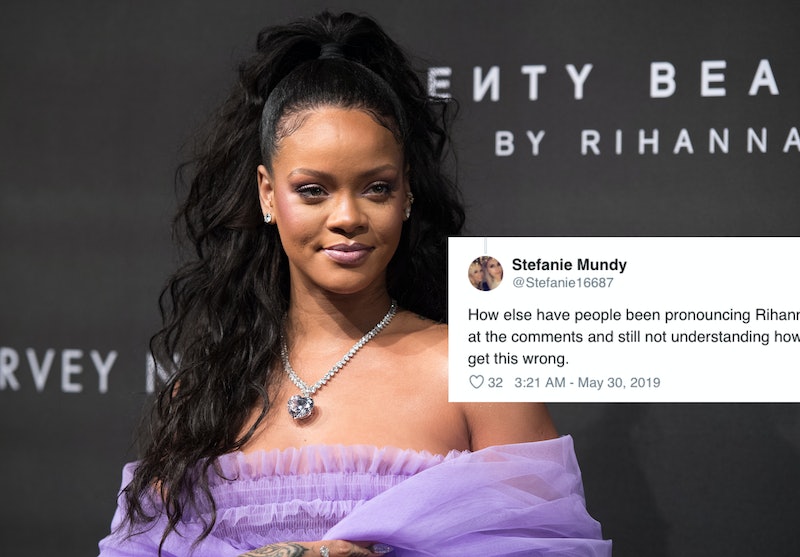 Are you sitting down? You should definitely be sitting down for this. Not to be dramatic, but this news could legit change your life. Coming to terms with your new reality won't be easy, either. It's going to require a major adjustment. Ready? OK, here goes: Rihanna's name might not be pronounced how you've been saying it all along, as BuzzFeed News reported. Apparently, it's REE-ANNA, not REE-AH-NA... well, maybe. Rihanna pronounced it REE-ANNA in a recent video for British Vogue, and it's caused a pretty divisive international debate.

OK, so, this whole thing came about after Rihanna said her name in a clip at her Fenty collection pop-up in Paris. "Hello British Vogue, it's Rihanna, and I want to welcome you to Paris where I'm launching Fenty," she said to the camera. The launch of Fenty is very exciting, no doubt about that — but that's not what we're here to discuss.

What we're here to discuss is how she pronounced her name in the clip. She pronounced it as, REE-ANNA — which definitely isn't the way most people here in the U.S. say it. According to BuzzFeed, people in other countries have been saying it like that all along.

How is it possible that Americans have been saying her name wrong this entire time, you wonder? Unclear. She's definitely pronounced it both ways at various points in time, though.

Take, for example, her song, "B*tch Better Have My Money." There's a part in the song where she goes, "Turn up to Rihanna while the whole club f*cking wasted." In this instance, she says, REE-AH-NA.

Is it possible that she pronounced it that way in the song because it sounded phonetically better for those particular lyrics? Maybe. But like, when Drake presented her with the MTV Video Vanguard award at the VMAs back in 2016, he said REE-AH-NA, too. And they were close friends and collaborators for quite some time. If anybody would know how to correctly pronounce her name, it'd be a friend, right?

Anyway, fans all over the globe have recently taken to Twitter with their thoughts on the matter. For the most part, it seems like the international contingency is pretty confused as to why this news about her name is even news at all.

"How else have people been pronouncing Rihanna? I’m looking at the comments and still not understanding how anyone could get this wrong," one fan from Germany said of BuzzFeed's article. "But we in the Caribbean been pronouncing it like this always. What do y’all say?" another fan asked. "Everyone except Americans knew they were pronouncing Rihanna’s name wrong this whole time," someone else chimed in.

So, which is it, you wonder? Well, as Elle recently pointed out, Rihanna has actually been trying to tell all of us the correct way to pronounce her name for years — and it's REE-ANNA, according to an interview the star did with AJ Hammer back in 2015.

Around the two-minute mark in the video, Hammer tells Rihanna that when they first met in 2005, she introduced herself as REE-ANNA. He then asked her to set the record straight for everyone else, and she said, "It's REE-ANNA." Doesn't get much more official than that, guys.

So, the bad news is that most of us have probably been saying Rihanna's name wrong for like, over a decade. The reason why or how that even started happening in the first place remains unclear. The good news, however, is that she seems kind of OK with it — but we should all probably spend the next decade pronouncing her name the right way: REE-ANNA.