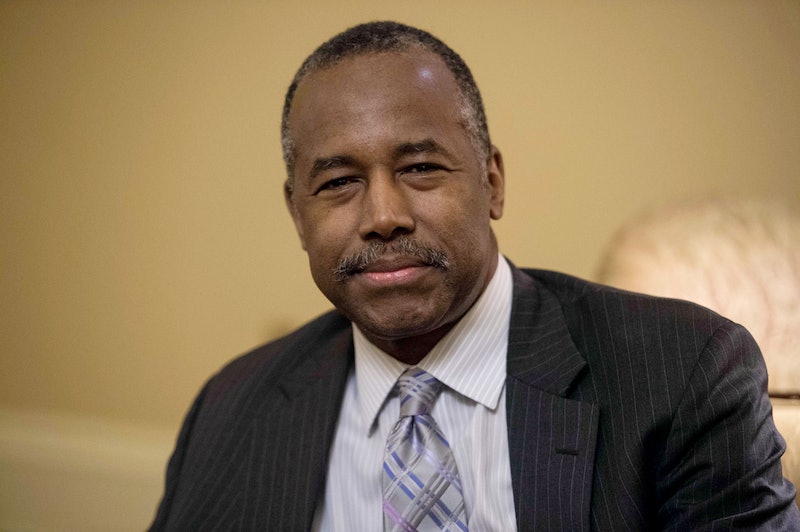 There are a few of Donald Trump's cabinet appointments who have been particularly troubling — either for potential conflicts of interests or a complete lack of preparation for the job at hand. When it comes to the former Republican presidential candidate Ben Carson, you should be worried about the latter. And fear not: for even though his confirmation hearings begin Thursday, there is still time to protest Carson as Trump's HUD Secretary

As CNN reported, Carson has "no government experience or expertise in housing and urban development policy" yet he's expected to run a $47 billion-per-year agency. Initially, he was even wary about taking the position because he himself didn't think he was qualified. Then he changed his mind, announcing as much on Facebook:

After serious discussions with the Trump transition team, I feel that I can make a significant contribution particularly to making our inner cities great for everyone. We have much work to do in strengthening every aspect of our nation and ensuring that both our physical infrastructure and our spiritual infrastructure is solid.

But that doesn't make his right-wing views any less worrisome. "It really is not compassionate to pat people on the head and say, ‘There there, you poor little thing. I’m going to take care of all of your needs,’" he said at a conference in February. “That’s not compassion; that’s the opposite of compassion. It's making people dependent." So if providing people with affordable housing is part of the problem, he's a scary choice for the agency tasked with that job. Here's you can fight his confirmation:

The only people who can stop Carson's confirmation are the senators. You should talk to yours. Check the Senate website to find the contact information for your state senator. Call them at their local office and their D.C. office. Leave messages if they don't answer. Tell them that you oppose Carson and why.

Even better would be if they're on the Committee of Banking, Housing, and Urban Affairs. That's the one running his hearings. There are 12 Republicans on the committee, and they should get extra special attention. Call them even if they aren't representing you.

Another step to take is signing a petition against Carson. The more people who do so, the more likely Congress is to listen. If you happen to be an expert in the field, perhaps you could join the open letter from housing and urban development academics that denounce his appointment:

Housing is an enormously complex issue. It requires, among other things, an understanding of finance, economics, labor markets, land use, transportation, energy and the many legal underpinnings that govern housing and development policy. Dr. Carson’s education, professional experience and basis of knowledge are wholly inadequate in these areas.

Share All This Online & With Friends And Family Members

None of this will make a difference unless there are enough citizens who reach out to legislators and sign the petition. The Republicans have the votes they need, so they will need to feel some other kind of pressure. Some Democrats might as well since they don't seem to have obstruction down to quite the same degree.

So in order to succeed, share these ideas far and wide. Find your senator's telephone and then text it to everyone you know in your state. Share it on Facebook. That's the kind of volume of calls that will be needed to change anything.

It might seem futile, but there's still time to pressure Congress and make a difference.