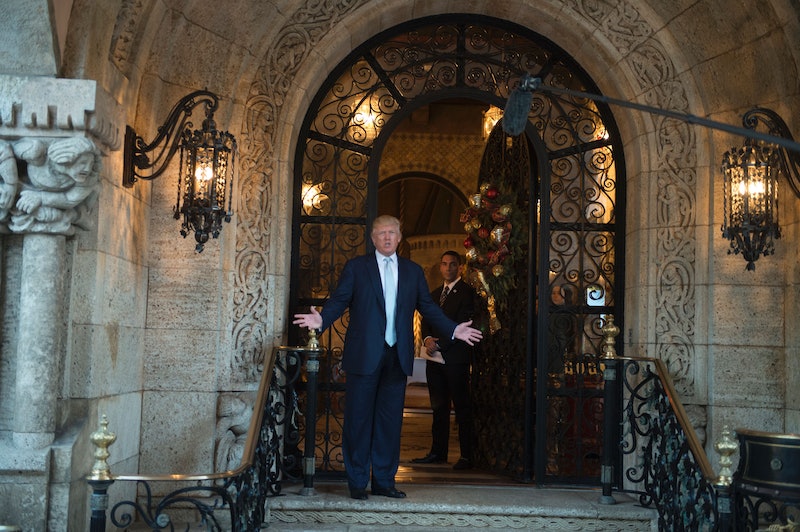 We are less than two weeks away from Donald Trump's inauguration. In 11 days, multiple former presidents and presidential candidates will make their way to Washington, D.C. to witness a "peaceful transfer of power." But even before taking power, Trump has normalized bigotry on a national scale. He has appointed known white supremacists to his cabinet, and his Twitter diplomacy is dangerous. Throughout his campaign, he espoused racist, sexist, Islamophobic, anti-Semitic, ableist, and xenophobic sentiments. So if you want to take action, here are some ways to protest Donald Trump's presidency and affirm solidarity with those who are most vulnerable.

Organizing and attending protests is an important form of resistance, but there are other things we all can and must do to show solidarity and make an impact. Trump may have been elected, but that absolutely does not mean we have to accept his violent rhetoric as normal or condone his calls for violence against marginalized groups.

As Trump's inauguration approaches, make every effort to hold space and fight for the communities he has threatened, and acknowledge that much of the groundwork for what Trump has proposed to do is already in place. His election should not be our sole motivation for fighting for justice, so here are some things you can do to not only resist him, but also to fight for systemic change.

Organizers across the country have planned protests and marches for Jan. 20, the day of Trump's inauguration. One of the largest is the Women's March, which according to its Facebook event page expects almost 250,000 people in Washington, D.C. This march is actually on the 21st, the day after the inauguration, and aims to be an inclusive event.

As the event gained traction, a Women's March has been planned in most states and in international cities like London and Paris. You can find an event in your region on the Women's March site or on the Facebook page for the original event.

There are a number of other events planned for Jan. 20 to resist Trump's presidency. Among these are a peaceful gathering on the Golden Gate Bridge in San Francisco, an "Occupy Inauguration" protest in Seattle, a marijuana reform action in D.C., and immigrant rights marches in Los Angeles.

If you are passionate about protesting Trump's presidency, then organizing and/or attending a protest or march is a valuable way to resist oppression and show your solidarity with marginalized communities.

As mentioned above, there will be immigrant rights marches in Los Angeles in light of Trump's inauguration. In response to Trump's proposed anti-immigration policies, such as the cancellation of the Deferred Action for Childhood Arrivals executive order, various pro-immigrant groups in Los Angeles have organized rallies and marches to support undocumented immigrants in their communities.

Attending an immigrant rights event is not the only way you can fight for undocumented folks in your communities. Put pressure on local law enforcement officials; insist that they follow the LAPD's example and refuse to help the federal government detain and deport people based on immigration status. Call your senators and urge them not to confirm any of Donald Trump's cabinet nominees — many of whom are in favor of increased deportations and tightened borders — before background and ethics checks are completed. Call your representatives and urge them to oppose Trump's 10-point immigration plan.

Most importantly, amplify the voices and work of undocumented folks. Do not speak over them, and do not take over spaces that are not your own. Being an effective ally means creating space in movements and communities for those who are most marginalized. Put your body on the line if you can afford to, be willing to occupy space, and understand that immigration status — like other axes of identity — operates in an intersectional way.

It is a widely known fact by this point that Trump once dismissed climate change as a hoax fabricated by China. However, that is not nearly as drastic as what he has done since being elected. Every agency that deals with climate in some capacity will, if Trump has his way, be headed by someone who does not believe that human activity is contributing to climate change.

Moreover, Trump included in his campaign platform that he wanted to "declare American energy dominance," a dangerous proposal that could make the fight against climate change more difficult than ever. Trump has also threatened to withdraw from the Paris climate agreement, and given that the U.S. is second only to China in greenhouse gas emissions, it could be difficult for other countries to combat rising global temperatures without American participation.

This is where we come in. Monday, Jan. 9 is the national Day of Denial, and protests have been organized across the country to reject Trump's climate-denying cabinet. Find an event near you at the link provided, or organize a future action to raise awareness about climate change in your community.

We must also put pressure on our lawmakers to resist Trump's plans to withdraw from the Paris agreement. As with immigration policy, ceaselessly calling your representatives and posing specific questions about climate change can be an effective strategy. Find out who your elected officials are and make sure they ethically represent their constituency.

Climate change is an urgent issue that disproportionately affects poor communities of color and indigenous communities in low-lying regions of the world. There is no time to be passive in the fight against climate change.

4. Reject All Forms Of Bigotry

Trump normalized hateful and violent rhetoric during his campaign. He routinely made racist and anti-Semitic comments, threatened to ban Muslims from entering the country, mocked a reporter with a disability, and encouraged violence against protesters and people of color at his rallies.

What makes this more dangerous is that Trump's rhetoric has lent credibility to white supremacists and neo-Nazis across the country. The aftermath of Trump's election saw an uptick in hate crimes, ranging from chants of "build a wall" and spray-painted swastikas to lynching references and assaults on Muslim women wearing hijabs.

It is not enough to simply consider yourself an ally or to make an occasional Facebook status condemning a racist incident. If you are in a position of power and privilege, you must actively take a stance against all forms of bigotry. Don't wait for something tragic to happen in your community before you speak out. Intentionally create space for marginalized folks, amplify their narratives, and make yourself available to do what is required of you.