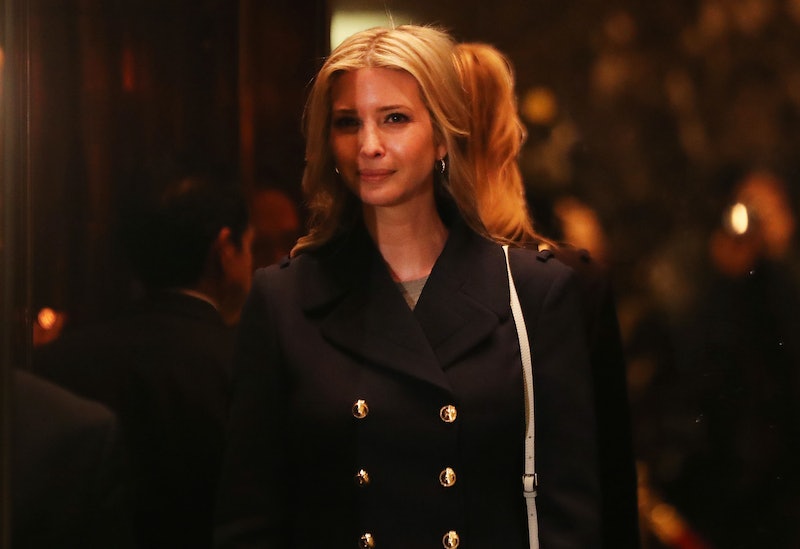 How do you solve a problem like Ivanka? With mere days until her father's inauguration as president, many Americans who disapprove of him are weighing their opinions of the future first daughter. Just before Christmas, one New Yorker made headlines for reportedly confronting Ivanka Trump on a JetBlue flight to Hawaii. That passenger was removed from the flight, though accounts vary as to whether he actually shouted at Ivanka. March Scheff, a man who said he was on the same JetBlue flight and allegedly witnessed the Ivanka incident, described in a Facebook post that the passenger "didn't accost her directly" but "was visibly shaking" and said, "'Oh, my god. This is a nightmare. They ruin the country, now they ruin our flight."

The Trump Organization said of the incident in a comment to CNN, "The story speaks for itself. It's an incredibly unfortunate situation."

Even as the precise details are not fully known (or are debatable), the incident raises a lot of questions about the many different ways to register discontent with the future first family. Namely, is Ivanka fair game for pushback and protest?

Civilities columnist Steven Petrow weighed in on the confrontation for the Washington Post, declaring that Ivanka, as a "public figure with [an] official role," was fair game for criticism. However, he also argued that while effective protests should push "the boundaries of what’s considered 'polite,'" they must also have a definite focus and objective — which the JetBlue confrontation did not.

Petrow's focus on specificity in protests is nothing new. Many of history's most famous protests — the Montgomery Bus Boycott, for example, or the Dandi Salt March led by Mahatma Gandhi — were planned to accomplish highly specific, policy-based ends.

Many historians of civil disobedience also note that purposeful protests are often the most effective.

"What are you really trying to accomplish with a protest?" said Indiana University sociology professor Fabio Rojas in a recent interview for New York's Science of Us. "Are you trying to influence a specific policy?... Are you trying to persuade people who are watching the movement, or even trying to persuade people on the other side of the movement?" In his book Civil Disobedience: A Practical Guide, Malcolm Coxall wrote,"Jumping into a protest campaign without working out the protest objectives and appropriate strategies is almost certainly a formula for failure."

What else makes for a successful protest? Other historians suggest tactics like strategic nonviolence, promotion on social media, and a willingness to work within existing democratic institutions.

The #GrabYourWallet movement is one anti-Ivanka protest that seems to embody each of these concepts. Founded by Shannon Coulter and Sue Atencio, #GrabYourWallet is a boycott aimed at retailers that sell Ivanka Trump and other Trump brand products. The boycott, which began in October, appears to have had at least some tangible success already. When Shoes.com stopped selling Trump products, Kerry Close at TIME's Money called it a "victory" for Grab Your Wallet. However, several major department stores, including Nordstrom and Macy's, have not adhered to #GrabYourWallets' plea. (However, Macy's did stop carrying Donald Trump's line of clothes earlier in his presidential campaign).

Coulter told Bustle that giving retailers the choice to change is central to the movement. "The most effective form of boycotting," she said, is "when you give the companies you’re boycotting an actionable, concrete way of changing in order to win the business back."

Other supporters of Grab Your Wallet agreed. "I don't think yelling at people is a useful form of protest," activist Katie Greer told Bustle in response to the JetBlue incident. "I also know that 'money talks'... I choose to pay attention to where things come from."

However, other activists argue that you should speak to Ivanka with your money and your mouth. Marketing consultant and activist Kat Calvin, who is also participating in Grab Your Wallet, said she believes that the Trumps should be confronted by ordinary people whenever possible.

"Hell yeah!" Calvin responded when asked if confronting Ivanka directly is an effective form of protest. "I think they should be picketing outside her new house in Kalorama every single day... Unless we confront them when we do see them, they will only be surrounded by people who tell them what they want to hear."

Perhaps one silver lining of a Trump presidency is that new ways to protest and express one's displeasure and desire for change seem to arise with each passing day. Case in point: the Women's March on Washington is expected to be one of the largest inauguration protests ever. And just this week after House Republicans voted to gut their own ethics oversight committee, voters reportedly took action and tied up Congressional phone lines until the plan was reversed.

People are taking action. So even if confronting the future first daughter on a plane is not your protest expression of choice, 2017 will certainly present plenty of other options.