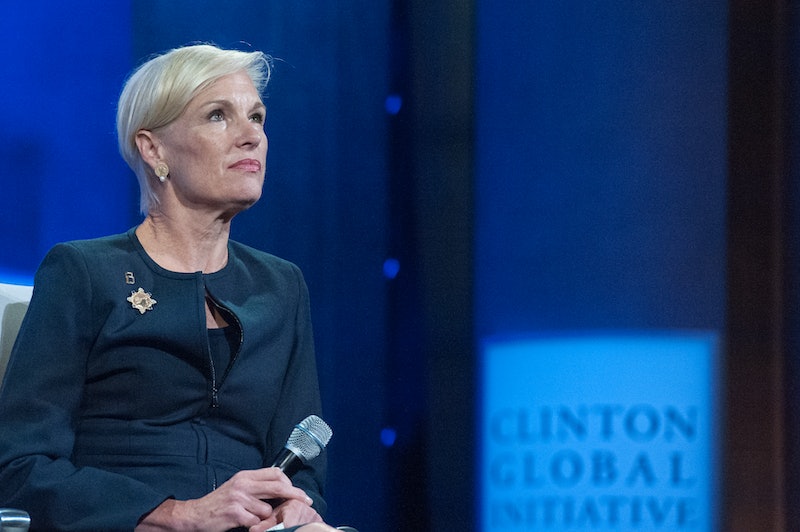 Speaker of the House Paul Ryan announced Thursday that Republicans plan to defund Planned Parenthood as part of their Obamacare repeal efforts. Democratic lawmakers vowed to fight the initiative, and if you'd like to protest the Planned Parenthood defunding, you have many options — but some may be more effective than others.

A word of caution here: You should never underestimate Congress' willingness to completely ignore public opinion, because it frequently does. That being said, protests are sometimes successful; we saw this recently when House Republicans scrapped their plans to gut the chamber's ethics office after receiving a flurry of angry phone calls from constituents. And more broadly, it's always worth making your stance be known to your representatives in Washington.

To make a very long story short, Republicans plan to repeal Planned Parenthood without the support of any Democrats. The GOP has enough seats in both chambers to do this, which means that Democratic lawmakers are, for all intents and purposes, irrelevant to this process. They have no power, at least by themselves, to stop it, so while there's no harm in calling your Democratic representative in Congress to register your opposition to the Republican proposal, doing so is essentially preaching to the choir.

The fact of the matter is that defunding Planned Parenthood can only really be stopped if Republicans oppose it. This means that if you're represented by a Republican lawmaker, either in the House or the Senate, you have a bit more leverage. Find out who your representatives are here, and if either of them are Republicans, you should most definitely call them and tell them you oppose any effort to defund Planned Parenthood. Every little bit counts.

Now, if you happen to live in Kentucky, Maine, Arkansas, or Tennessee, you've got a lot more power here, and you should really, really make a phone call to one of your Senators. Here's why.

They are are Sens. Susan Collins of Maine, Rand Paul of Kentucky, and Tom Cotton of Arkansas. All of them have different reasons for opposing the proposal, but the upshot is the same regardless: If all three vote against defunding Planned Parenthood, it's not going to happen.

So, if you support Planned Parenthood and live in Maine, Kentucky, or Arkansas, your voice matters a lot here. Contact Collins, Paul, or Cotton (whichever one represents your state), and tell them that you're a constituent of theirs who vehemently opposes any attempt to defund Planned Parenthood. And if you live in Kentucky, you may as well give Senate Majority Leader Mitch McConnell a call as well and say the same, as he's the one who ultimately decides which bills to bring up for a vote.

The same is true if you live in Tennessee, albeit for a slightly different reason. Tennessee's senior senator is Republican Lamar Alexander, and as the chairman of the Health, Education, Labor and Pensions Committee, he's the one drafting the Obamacare repeal legislation. Republicans tentatively plan to use the Obamacare repeal bill as a vehicle to defund Planned Parenthood — but Alexander said Thursday that this isn't set in stone. In other words, the Planned Parenthood defunding may not even come up for a vote in the Senate.

Furthermore, Alexander has previously played a role in defeating GOP attempts to defund Planned Parenthood. Sure, his objections were more procedural than substantive, but that's more than can be said for his socially conservative colleagues. In any event, all of this makes Alexander one of the Republican senators most likely to throw a wrench in the effort to defund Planned Parenthood. So, if you live in Tennessee, call him, because his decision on this will be crucial as well.

Ultimately, letting your opinion be known to lawmakers is a time-honored American tradition, and indeed central to the idea of a representative democracy. In this specific case, some lawmakers are a lot more powerful than others, and those are the ones you should contact if you want to preserve federal funding for Planned Parenthood.