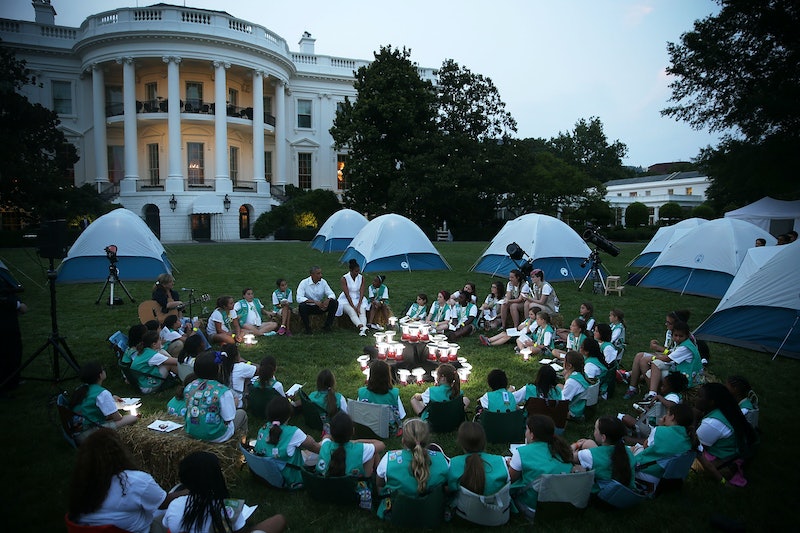 The news that Girl Scouts will march at Donald Trump's inauguration was quickly controversial. Granted, the Boy Scouts of America are attending, too, but news of the former raised eyebrows in particular because of the president-elect's track record with women. If you're unhappy with their participation, here's how you can protest the Girl Scouts' inauguration march.

Trump has infamously made comments bragging about sexual assault in one leaked video. In another, he laughs about how he would be dating a 10-year-old girl "in 10 years." As a result, many supporters of the Girl Scouts have challenged the group's decision to participate, vocalizing their displeasure on Twitter and elsewhere. For the record, no scouts are required to attend; Girl Scouts of America (GSUSA) has made clear that each scout can decide for herself whether to participate. GSUSA did not respond to Bustle's immediate request for comment.

Despite this, some people — myself included, as I explained in an editorial — feel that the organization's decision to participate normalizes and reinforces many of the things Donald Trump has done and said about women.

I respect GSUSA members' right to freedom of speech, but I disagree with the organization's decision to continue a decades-long tradition as if nothing is meaningfully different about this President-elect.

If you want to contact the Girl Scouts of America to voice your opposition to their participation in Trump's inauguration, here's how. Remember to be polite and respectful when voicing your opinion.

The @girlscouts Twitter account has been flooded with messages from former scouts and scout moms since the announcement. If you were a member of the Girl Scouts, talk about what it meant to you.

"What I gained from Girl Scouts was what it was to feel a sense of duty to the community," wrote former Girl Scout Jean Hannah Edelstein in The Guardian, where she published an editorial registering her disagreement with GSUSA's inauguration participation.

Talk to the Young Girls in Your Life

Whether they are members of the Girl Scouts or not, talk to your daughters, nieces, or any other young women in your life about the inauguration. Make sure they know that they are worthy of respect and love, and that the way Donald Trump has spoken about women is not acceptable no matter who lives in the White House. For that matter, speak to your sons and nephews, too — make sure they know how important it is to treat their female peers with respect.

As disconcerting as GSUSA's participation may be, it is merely a small part of a much larger problem. By Friday night, the inauguration will be over, but the behavior it normalized will continue. It is up to us as adults in the community to ensure that young women who watch the ceremony (and even those who participate in it) still refuse to accept the disrespect and objectification with which Trump and men like him treat women.