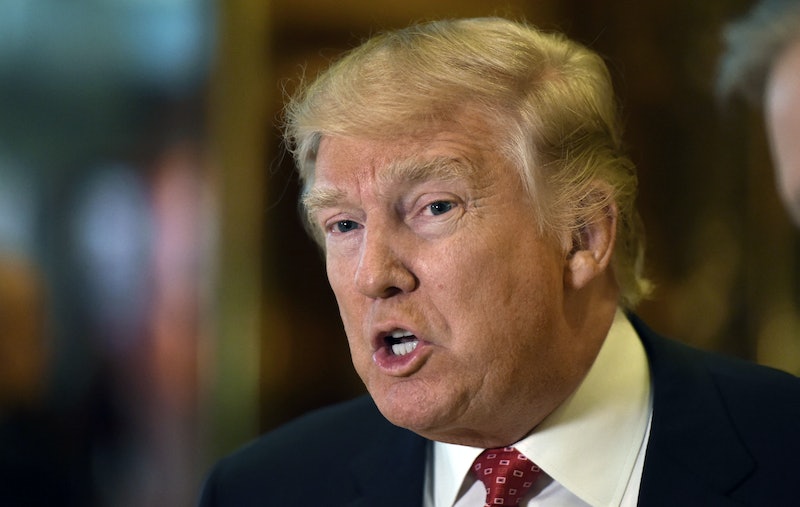 Be forewarned, this is a story you'd be well-advised to take with an absolutely enormous grain of salt, as bizarre and explosive as it is. Here's the situation: An unverified memo, first alluded to in a CNN report and subsequently published in full by BuzzFeed, alleges that President-elect Donald Trump is effectively being blackmailed by Russia, thanks to compromising information and materials the state has on him. Update: Donald Trump denied the allegations on Twitter at 8:19 Tuesday evening, saying "FAKE NEWS - A TOTAL POLITICAL WITCH HUNT." Update #2: On Wednesday morning, Russia denounced the unverified report involving supposedly compromising allegations against Donald Trump as an "absolute fabrication."

Earlier: "Compromising" is the polite way to phrase it, and the specifics of the behavior the memo alleges Trump participated in (which again, is completely unconfirmed as of now) is what just hit social media like a deluge.

You can read the report here via BuzzFeed. Here are some of its various allegations ― Trump has not yet responded publicly to them.

The "perverted" behavior the report specifically alleges is undeniably what's drawn the most attention on social media, with countless people on Twitter slinging jokes and reacting in stunned disbelief. That's overshadowed somewhat the more sober CNN report, including the allegation that there was "a continuing exchange of information during the campaign between Trump surrogates and intermediaries for the Russian government."

Before getting to that specific detail, however, it bears saying yet again that these claims are entirely unsubstantiated, and unverified by American intelligence agencies. The decision to publish them memo was, according to BuzzFeed, made for the following reason:

Now BuzzFeed News is publishing the full document so that Americans can make up their own minds about allegations about the president-elect that have circulated at the highest levels of the US government.

Whether the report is accurate or not is far too soon to say, although ABC News reports that the FBI is currently investigating the allegations, while The Guardian reports that they were turned over to FBI director James Comey last month.