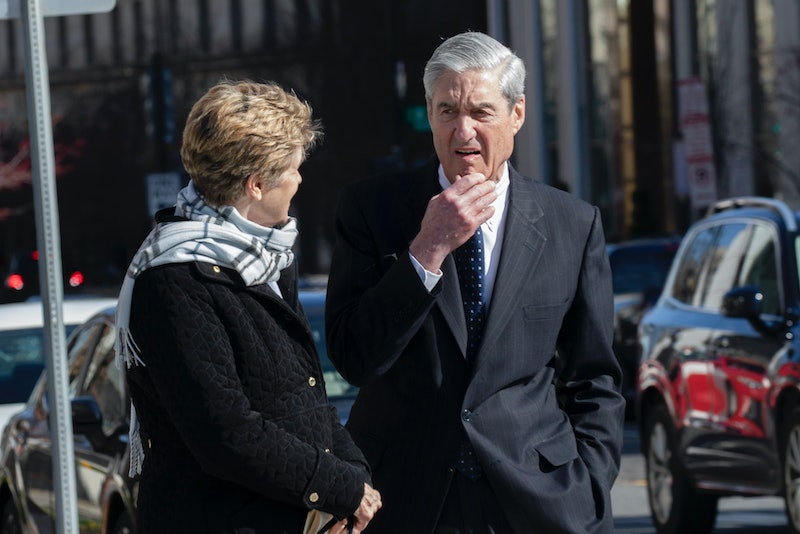 Special Counsel Robert Mueller's report on his investigation into whether or not President Trump's 2016 campaign coordinated with Russia is expected to be released on Thursday. There's going to be a lot of information to sift through: Attorney General Bill Barr told Congress that the full report is about 400 pages long, New York Magazine reports. That's 100 times longer than the summary Barr himself released in March. Former prosecutors tell Bustle that when it comes to how to read the Mueller report, it's best to have a strategy in place.

"The Mueller report is likely to be jam-packed with figures, facts, and footnotes from the extensive investigation," Julie Myers Wood, a former federal prosecutor who worked on Independent Counsel Kenneth Starr's investigations into former President Bill Clinton, tells Bustle. "It would be easy to get overwhelmed poring through the hundreds of pages."

Before the report comes out, Wood suggests readers refresh themselves on the information about the Mueller investigation that's already out there. That might include taking a look at a timeline of key events in the probe, or brushing up on why the investigation was significant in the first place.

According to USA Today, no one knows for certain how the report will be laid out — not even the White House. But Wood suggests readers first look for any short summaries that may explain the text as it goes along.

"Once the report comes out, and to get a preliminary understanding of Mueller’s conclusions, the executive summaries of each section are a good place to start," she advises. "Ignore the footnotes, at least for the first time through."

Barbara McQuade, a former federal prosecutor, tells Bustle that readers should also be on the lookout for answers to one specific question: "We know that his investigation did not establish conspiracy with the Russian government, but what were the facts?" McQuade suggests that readers approach the report with an eye toward whether Trump welcomed Russia's help in the election, "even if he did not agree to participate in a violation of federal statute."

She also advises readers look for information that speaks to whether reports of the Trump's campaign's communications with Russia were "overblown" or not. (President Trump has consistently denied that there was any collusion between his campaign and Russia, and was not specifically accused of wrongdoing.)

"Why were so many of Trump’s associates convicted of lying?" McQuade asks while detailing what readers should look to answer for themselves while examining the report. "What were they trying to conceal?"

At least three of Trump's aides were convicted of lying to authorities since the investigation first began. Former National Security Adviser Michael Flynn was convicted of lying to the FBI about contacts he had with Russian Ambassador Sergey Kislyak; Trump's former personal lawyer Michael Cohen pleaded guilty to lying to Congress about a potential Trump real estate project in Moscow; and George Papadopoulos, a former Trump campaign foreign policy adviser, pleaded guilty to lying to FBI about contacts he had with a Russian professor and other individuals who had close ties to the Kremlin.

While those indictments illustrate a pattern of Trump associates misleading investigators, according to The Washington Post, there isn't a lot of information out there that helps put those convictions in context. It's also not clear how much information the Mueller report will reveal, since Barr said he plans to redact the report to protect certain categories of information. Barr assured members of Congress that they would get "more than the gist" of the report, even with the redactions, as NPR reported.

It's possible that Mueller's report will raise just as many questions about the investigation as it clears up. The former federal prosecutors tell Bustle that the best way to tackle that uncertainty is to make sure that you're as up-to-date as possible with news related to the investigation before diving into the document. Armed with that knowledge, you can then look for the facts in the report that will fill the gaps in your understanding of the case.