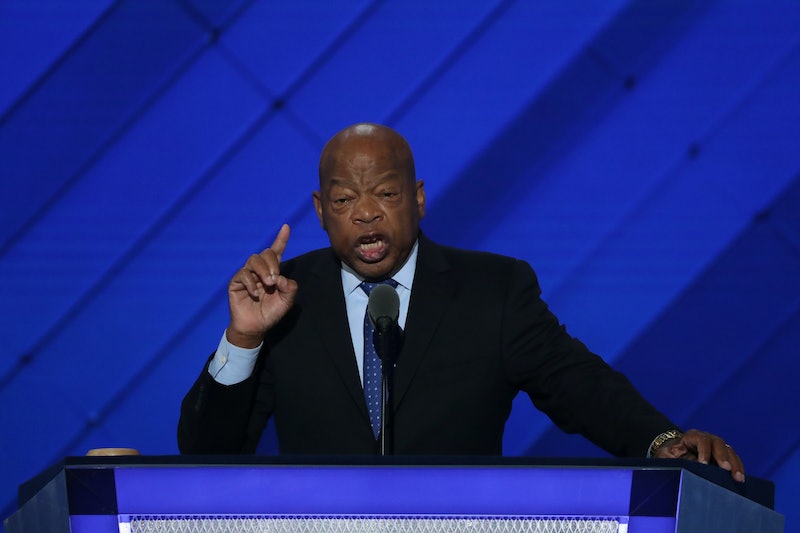 Monday marked the remembrance of civil rights leader Dr. Martin Luther King Jr. King's legacy has left an imprint on America, one that is especially important to remember now as many people feel anger at continued injustice. At a breakfast in Miami in his honor, Democratic Rep. John Lewis gave a speech about Martin Luther King Jr. and shared a powerful story of forgiveness despite discrimination and violence which speaks to King's values.

"I have prepared a speech, but I'm not going to use that," Lewis said before thanking those who were there for standing up and speaking up. The event was a part of the annual scholarship breakfast of the 5,000 Role Models of Excellence Project, an organization that helps "at-risk" Miami youth and connects them to scholarships and role models.

Lewis started by talking about his childhood in Troy, Alabama, and fighting against discrimination. He then spoke of his involvement in the Civil Rights Movement, and shared a powerful story about being beat up by a group from the Ku Klux Klan in a "white waiting room" while on a trip from D.C. to New Orleans in 1961:

Many years later, to be exact in February '09, one of the men who had beaten us came to my Capitol Hill office. He was in his 70s with his son in his 40s, and he said, 'Mr. Lewis, I was one of the people who beat you and your seat mate. I was part of the Klan.' He said, 'I want to apologize, will you accept my apology? Will you forgive me?' And I said, 'Sir, I accept your apology, I forgive you.' His son started crying. He started crying. They hugged me, I hugged them back. And I started crying.

So I say to you as role models, never give up. Never give in. Stand up, speak up. When you see something that is not right, not fair, not just, you have a moral obligation to do some thing, to say something, and not be quiet. Yes, we've come a distance, we've made a lot of progress as a nation and as a people. But we're not there yet. The scars and stains of racism are deeply embedded in American society. We must not be at peace with ourselves as a nation until we have the change that Dr. King dreamed of.

Lewis recently has been speaking out against President-elect Donald Trump, and made his views of him explicitly clear when he said, "I don't see this president-elect as a legitimate president" on Meet the Press. Lewis spoke of the allegations of Russian interference in the U.S. election, and Trump responded on Twitter, saying "Congressman John Lewis should finally focus on the burning and crime infested inner-cities of the U.S. I can use all the help I can get!" Lewis is among several politicians who will not attend Trump's inauguration on Friday.

You can rewatch Lewis' full speech that he gave on Martin Luther King Jr. Day below — and you should.

It's important to remember Lewis' words, that we all have a responsibility to act when we see injustice. Now more than ever it is essential that we don't allow hatred to divide us.