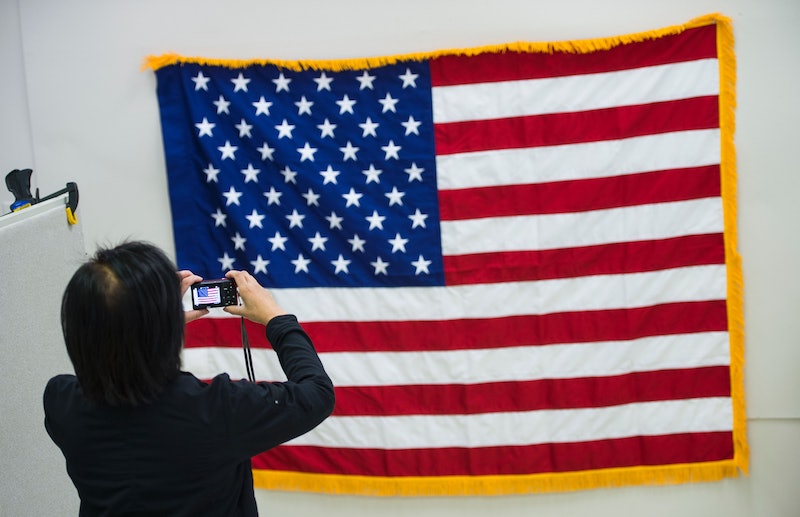 Donald Trump doth protest ... a lot ... about the unconfirmed news that broke yesterday alleging that Russia has compromising information about the president elect and how he reportedly paid prostitutes to perform "golden showers" (read: pee) on a mattress in front of him.

There have been rumors that Trump is so (overly?) complimentary to Putin because the Russian dictator has something over him — and this could be it. It's a story that's been making the rounds in Washington circles, but until now has been chocked up to a rumor. It was yesterday when this got real according to a U.S. intelligence report.

Now Trump is coming out swinging, apparently very concerned about what a story like this could do to his reputation, essentially claiming he has been framed, capitalizing on the recent fake news controversy:

It's a tweet that was followed in short order by six subsequent tweets on the topic from his account. Even, in the most recent tweet, comparing himself to a victim of Nazi Germany:

But calling it fake news seems to be a bit of a stretch considering the classified briefings last week were presented by four of the senior-most US intelligence chiefs: Director of National Intelligence James Clapper, FBI Director James Comey, CIA Director John Brennan, and NSA Director Admiral Mike Rogers.

Not to mention, another high level administration official told CNN,

"I have a sense the outgoing administration and intelligence community is setting down the pieces so this must be investigated seriously and run down. I think [the] concern was to be sure that whatever information was out there is put into the system so it is evaluated as it should be and acted upon as necessary."

Now Dems are worried about what else is in the shadows including known-unknowns like how Trump won't release his tax returns. Namely, Representative Eric Swalwell of California, a member of the House Intelligence Committee, who is demanding deeper investigations on the matter to get a better understanding of how Russia interfered with the U.S. election and how much Trump knew, saying:

“The president-elect has spoken a number of times, including after being presented with this evidence, in flattering ways about Russia and its dictator,” Mr. Swalwell said. “Considering the evidence of Russia hacking our democracy to his benefit, the president-elect would do a service to his presidency and our country by releasing his personal and business income taxes, as well as information on any global financial holdings.”

According to one story, there were hidden cameras and microphones in the room where the acts took place — but alas, nobody's been able to dig up the raw footage.

You can stream (heh, stream ... yes, I am a twelve-year-old boy) the presser live at 11 am here, where he will likely address that and other important foreign policy conflicts of interest.