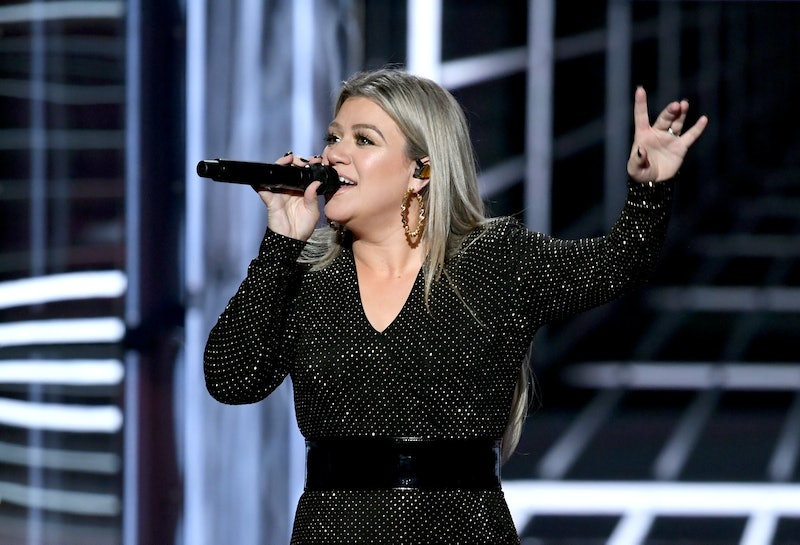 The 2019 Billboard Music Awards are going to be bigger than ever. Kelly Clarkson is coming back to host the show for the second year in a row, and Taylor Swift is set to open the show with a world premiere performance of her new song "ME!" also joined by Brendon Urie, according to Billboard. Another big performance happening at the show is Madonna and Maluma. They'll be performing their song, "Medellin." Billboard described both of these performances from Swift and Madonna as kickoffs to their new eras, so it should be something to look out for. Other performers include Clarkson, Ariana Grande, BTS and Halsey, Ciara, Lauren Daigle, Dan + Shay, the Jonas Brothers, Tori Kelly, Khalid, and Mariah Carey, who will receiving the Icon Award. Halsey seems to be performing on her own as well, not just the collab with BTS, and so does Panic! at the Disco, so it looks like Urie and Halsey fans are in for a good night.

And Clarkson promised that this year's show is not one to miss. "I had so much fun hosting the Billboard Music Awards last year that I’m back for more,” the singer and host said in a statement, reported Billboard. “We’re turning it up a notch this year and I can’t wait to celebrate all of my fellow amazing artists for another unforgettable night of live music.” Bottom line: you're going to wanna tune into the BBMAs, and here's how you can do it.

The show will air on NBC, live, on Wednesday, May 1, at 6 p.m. PT/8 p.m. ET. It's taking place in Las Vegas at the MGM Grand Garden Arena and will last around three hours, according to Billboard. This is a "free" option to watch on your TVs if you get NBC without cable.

If you're interested in the red carpet, there will be one happening on Billboard's free livestream and hosted by Sway Calloway, Sofia Reyes, and Jaymes Vaughan at 4 p.m. PT/6 p.m. ET. Billboard's official Twitter will have it as well.

If you have a cable provider, you can also watch NBC live on their website and on the app. It'll air live at the same time as on TV, so it's perfect for people who aren't able to be in front of their TV, but still want to watch.

If you have live streaming services like Hulu Live TV, YouTube TV, or Sling TV, and NBC is one of the channels available to you, then you can of course watch that way as well.

While there's no free live stream for the show if you don't have cable, the performances typically end up on YouTube within a few days. And Twitter will definitely highlight any and all exciting moments if you can't find another way to tune in. You just have make sure your schedule's cleared.

More like this
Everything To Know About Taylor Swift’s 10th Studio Album, 'Midnights'
By Grace Wehniainen and Jake Viswanath
Jason Derulo Is Launching A New Singing Show In The UK
By Maxine Harrison
There's A Taylor Swift Easter Egg In Ryan Reynolds' 'Deadpool 3' Teaser
By Marina Watts
Is Dua Lipa Dating Trevor Noah? New Photos Show Them Kissing & Hugging
By Brian Anthony Hernandez and Martha Sorren
Get Even More From Bustle — Sign Up For The Newsletter