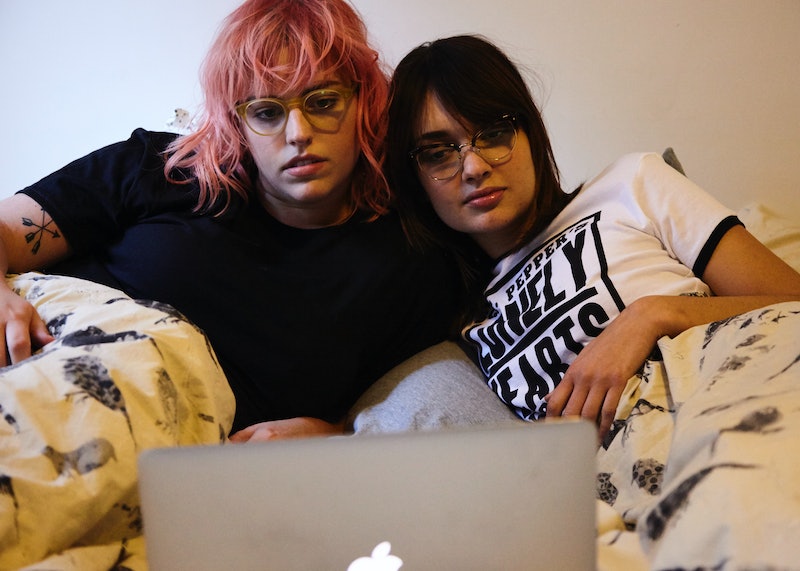 Many people around the country aren't able to make it all the way to Washington, D.C. for the Women's March on Washington that's set to take the city by storm on Donald Trump's first full day as president. If you wish you could attend, you could certainly go to a sister march instead — there are hundreds taking place around the country — or you can gather some friends and stream the women's march online to at least feel like you're part of the protest.

Firstly, before you settle onto the couch and pull a video stream up, do consider going to a march in your area. There are more than 600 sister marches around the world, and even if you live far from a big city, even if you live outside the United States, there's probably one in a town that's near you. You can also march virtually. The Disability March was created for those who want to march but physically cannot. Instead, they're banding together online and performing actions like tweeting with the hashtag #disabilitymarch and tagging elected officials to tell their stories.

But if you just want to see what's going on, you're covered. Several outlets will be streaming coverage of the march, and you'll see plenty of videos on Facebook and Twitter as well. In fact, you might as well first follow the official Women's March Twitter and Facebook accounts for the chance that they'll either be posting live videos of its own or sharing others.

Although the Women's March official website still states that there will be "more information" coming regarding a live stream, there are other ways to watch. The nonprofit news organization Democracy Now! will be streaming the march at this link starting at 10 a.m. on Saturday, or you can watch on LinkTV, which it says is Dish Network 9410 and DirecTV channel 375. According to Democracy Now! the stream will be broadcast from near the main stage at the march and will "include speakers and performers from the stage and interviews with people from around the world who are attending the march and rallies in D.C., as well as reports from other actions around the country."

CNN Go will reportedly be live-streaming the event, and watch for live coverage on other news outlets like CBS News, which often streams news coverage online without you having to log in with a TV provider, though many outlets might require a subscription.

The Women's March might very well be bigger than Trump's inauguration itself, so if you can't attend it or a sister march, definitely open up your computer and march virtually or watch it from afar. The march is about the "protection of our rights, our safety, our health, and our families — recognizing that our vibrant and diverse communities are the strength of our country," and that's something that shouldn't be tuned out.