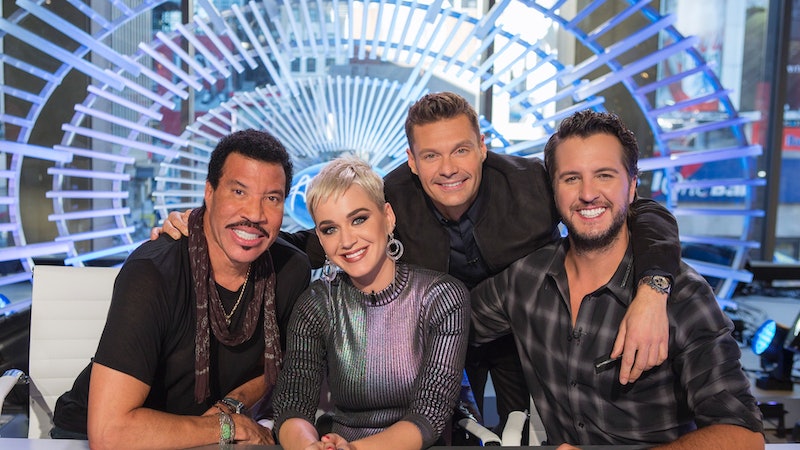 The founding father of U.S. reality-competition shows is back for a staggering 18th season. With a fresh lineup of judges and new TV home, American Idol returned to our screens in 2018 after two years off the air. Now, with longtime host Ryan Seacrest back at the helm, the all-star judges have hit the road once again in the hopes of discovering America's next singing sensation. The new season is already underway over in the states, and if you're hoping to keep up-to-date with show's latest run, here's how to watch American Idol in the UK.

Well, it appears fans on this side of the pond are in luck, because American Idol 2020 is now available to stream on Netflix UK. As the Metro reports, the reality-competition show first began airing on Netflix during Idol's 17th series last year, with new episodes being made available on the platform every Tuesday — just two days after the show's initial U.S. broadcast. Back in 2018, the long-running talent show aired weekly on Amazon Prime Video in the UK. However, episodes are no longer available to stream or purchase on the platform.

As reported by Digital Spy, the new season welcomes back an A-list judging panel, that once again consists of pop princess Katy Perry, the legendary Lionel Richie, and country music-star Luke Bryan. Meanwhile, in-house mentor Bobby Bones will again be on hand to offer hopefuls his expertise, and Idol veteran Seacrest has returned to oversee hosting duties on the series, which moved from the FOX network to ABC in 2018.

As Variety reports, the long-standing host has fronted the U.S. talent show since 2002, and in a statement regarding his return, Seacrest revealed that he "can’t wait to return to the stage."

"It’s the greatest gift to be able to play a part in discovering new talent with a franchise that has been such a relevant part of American culture for so many years," Seacrest explained. Whilst president of ABC Entertainment, Karey Burke, previously described the American Idol host as "remarklable," and praised the "energy and enthusiasm he brings to the show."

Well, I for one am thrilled to see the OG talent series bounce back for what promises to be yet another fantastic run, and you can catch brand new episodes of American Idol season 18 on Netflix UK.