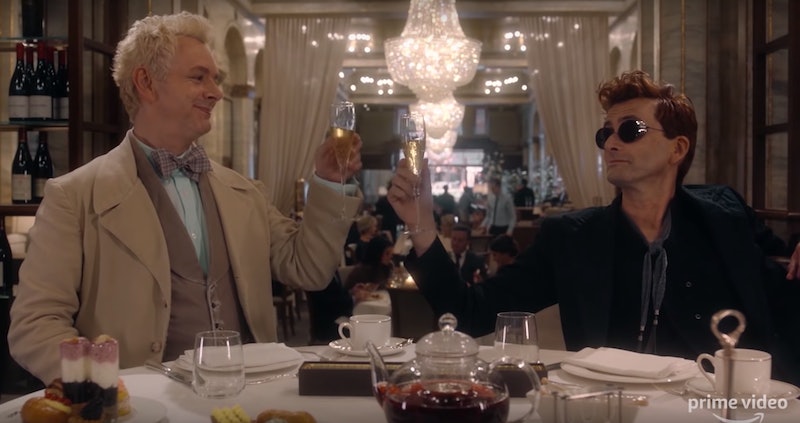 Terry Pratchett and Neil Gaiman's beloved fantasy novel has finally been brought to life on-screen in the brand new series Good Omens. The series is based on the 1990 novel of the same name, and follows the story of otherworldly beings, who after settling into life on earth, have to try and prevent the rise of the antichrist. The cast includes some heavy hitters from the world of acting, and the show has finally made its highly-anticipated debut. So, if this adaptation sounds like your cup of tea, here's how to watch Good Omens in the UK.

The series is co-produced by the BBC and Amazon, and all six episodes were released in their entirety on Amazon Prime on Friday, May 31 2019. Following its initial release on the streaming service, Good Omens will also air on BBC Two at a later date, reports the BBC. Although the precise date has yet to be announced.

An official synopsis on the Amazon Prime website reads, "The End of the World is coming, which means a fussy Angel and a loose-living Demon who've become overly fond of life on Earth are forced to form an unlikely alliance to stop Armageddon. But they have lost the Antichrist, an 11-year-old boy unaware he's meant to bring upon the end of days, forcing them to embark on an adventure to find him and save the world before it's too late."

The series stars David Tennant and Michael Sheen as the characters of Crowley and Aziraphale, respectively. Their characters form an unexpected angel and demon duo, who team up to prevent the potentially catastrophic threat of the antichrist. Also starring in the series is ex-Mad Men star Jon Hamm as the Archangel Gabriel, while Sherlock's Sian Brooke appears as Deirdre Young, the mother of the young antichrist. Starring as Deidre's husband is Line of Duty actor Daniel Mays, and the Oscar-winning Frances McDormand is the voice of God.

Tennant has previously discussed what attracted him to the character of Crowley. Speaking to Digital Spy, the Doctor Who actor explained that his character "enjoys life" and "doesn't lack self-confidence." He went on to add "that means he's someone rather appealing to get under the snakeskin of — he's a delicious character, and because he's got that supernatural element as well, all bets are off. You can kind of take that in as many directions as your imagination will allow, which is fantastically liberating."

In an interview with Digital Spy, Sheen also gave insight into his character's development over the course of the series. He said, "For someone who's eternal, he does actually kind of change as the piece goes on. He starts out being slightly holier-than-thou — what we have as an idea of a boring goody-goody two-shoes or whatever — but actually it becomes something different over time."

The entire first series of Good Omens is now available to watch on Amazon Prime, and I cannot wait to delve right into this quirky new fantasy drama.