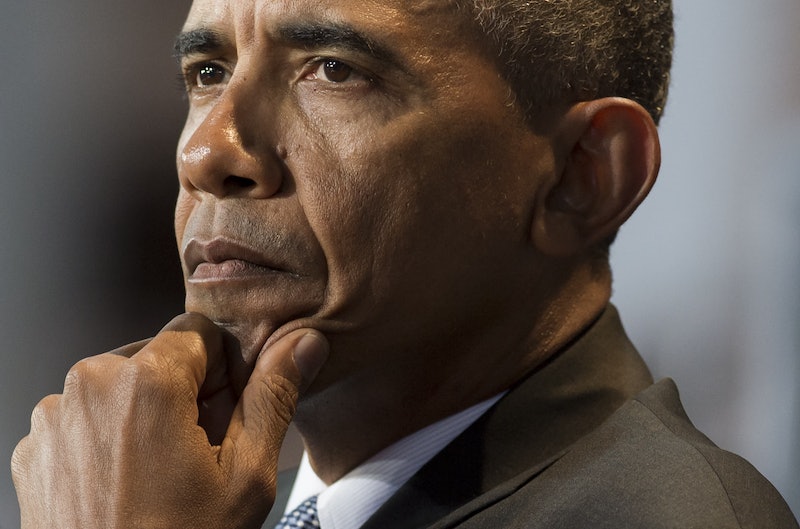 Unfortunately, the moment is nearly here. President Obama is leaving office. But before he goes, there are a few things he wants to say. We've got to let him finish, and he's going to do so at a farewell event reuniting supporters in Chicago, the city that got him started in politics. What exactly he'll say is still under wraps, but the general idea is that he will celebrate his accomplishments, thank his supporters, and say some things about the future. So here's how to watch Obama's farewell speech, even if you don't want to say goodbye.

You first have a decision to make. Do you want to watch in person? If so, you can potentially get tickets. You'll have to plan a long weekend in Chicago to do so, though, because the tickets will only be given out in person a few days before the event on Saturday, Jan. 7, at the McCormick Place convention center just south of downtown along Lake Michigan. They're first come, first serve. The speech will be given on Tuesday, Jan. 10 at the same location. But arrive early, because security will be tight, just like at any event featuring the president.

If you're not going to be in the Windy City, or you'd rather watch from home, don't worry. You can see the event online. And because Obama has made the White House so tech-friendly, you can see it from all your devices. It will be live-streamed at www.whitehouse.gov/farewell, and also at wwww.Facebook.com/WhiteHouse, if you prefer. It will also be up on the White House social media channels.

Obama wrote a short message inviting everyone and explaining that his political work has always been about the people who support him and working together:

Since 2009, we've faced our fair share of challenges, and come through them stronger. That's because we have never let go of a belief that has guided us ever since our founding—our conviction that, together, we can change this country for the better.

Given his well-known ability to wow a crowd, be prepared for words that will resonate for generations. Many presidents have given farewell addresses, NPR reported, but the most influential was President Dwight Eisenhower's in 1961, when he warned about the military-industrial complex. Obama's could change that.

One of his points could be to let the Republicans fully own their mistakes in these next years. Obama said Wednesday that Dems should make the Republicans fix their own replacement for the Affordable Care Act and call it Trumpcare. Maybe he'll clear up the Democratic vision going forward so that the party is on the same page for midterms or fight Trump's policies more generally.

One thing's for sure though: No matter what he has to say, you're going to want to hear it.