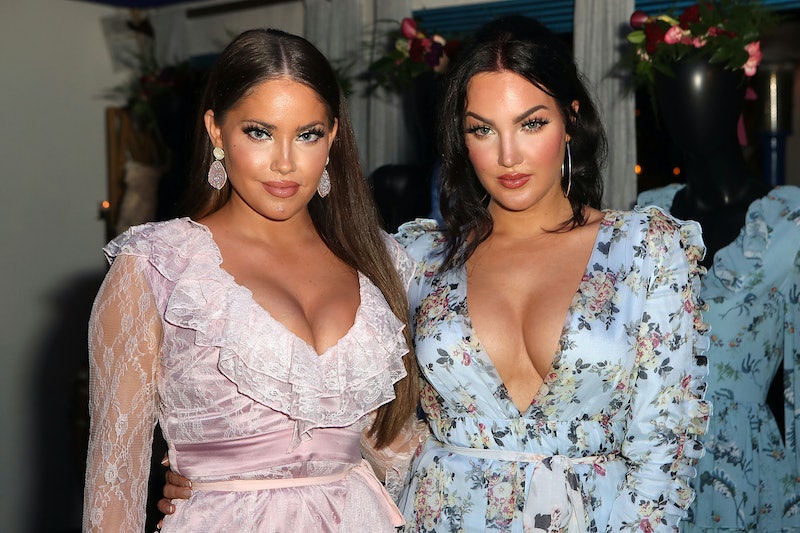 Nowadays, it seems like all you need is a phone, the incentive to hustle, and an entrepreneurial edge in order to become a big-time celeb. Take cousins Natalie Halcro and Olivia Pierson, aka Nat and Liv, who have conquered social media with their huge personalities and poise. They're perhaps best known for their beauty tutorials on YouTube, but now you have the chance to get to know them a lot more, as these social influencers have been given their own TV show. And here's how to watch Relatively Nat & Liv in the UK.

While the show'll be premiering on E! in the US on Sunday, June 2, according to Broadway World, you won't have to feel too jealous of your Stateside pals, as Relatively Nat & Liv will be premiering the following day on Hayu in the UK, according to a statement sent to Bustle from the network.

As well as giving you the chance to get to know Nat and Liv a little better, you'll also be given an insight into the world they live in, with appearances from their close friends and family, both in Los Angeles and their hometown in Vancouver. So you'll get to see just where Nat and Liv get all that vivacious energy from.

"Their loud and lively mums, Rhonda and Julia are also sisters and the glue holding this eccentric group together through vacations and weekly Sunday night dinners. Natalie is also close with her sister Stephanie, the eldest cousin, who is a free-spirited, eclectic personality and sometimes struggles to find her place in the group, often identifying herself as the 'black sheep.'"

You'll also get to know the pair's brothers, Joel and Owen, who help the social media influencers to "build their brand as they work towards curating their first fashion line." If anything, the show will prove that Nat and Liv's success isn't just a joint effort, but a whole family-driven initiative to get these two to the top.

If you want a taste of what kind of thing to expect before Relatively Nat & Liv premieres on June 3, then be sure to head to their YouTube channel and surrender yourself to a full-blown vlogging and beauty tutorial marathon. Among the most popular are Liv's hair tutorial, showing you how to create two "quick & easy buns," along with Nat's under eye highlighter tutorial and the fall make-up tutorial. You can also find Nat on Instagram under @nataliehalcro, and Liv on @oliviapierson. And of course they go hard on Twitter, so make sure to follow Nat on @nataliehalcro, and Liv on @oliviapierson.

You'll need to be subscribed to Hayu in order to watch Relatively Nat & Liv, so if you haven't already, head to the Hayu site and sign up. Subscriptions start at £4.99 a month, and that'll give you access to over 200 shows. Plus, the majority of their U.S. shows debut on the Hayu service the same day as their U.S. launch. Heaven.

More like this
After The Bling Ring, Nick Prugo Was Embroiled In Another Scandal
By Arya Roshanian
The Real Reason Russell Brand Decided To Quit YouTube
By Sam Ramsden
Nicola Coughlan’s Description Of Meeting Olivia Colman Is Just So Nicola Coughlan
By Sam Ramsden
Victoria Beckham Loves Teasing David About His “Sticky” New Hobby
By Sam Ramsden
Get The Very Best Of Bustle/UK