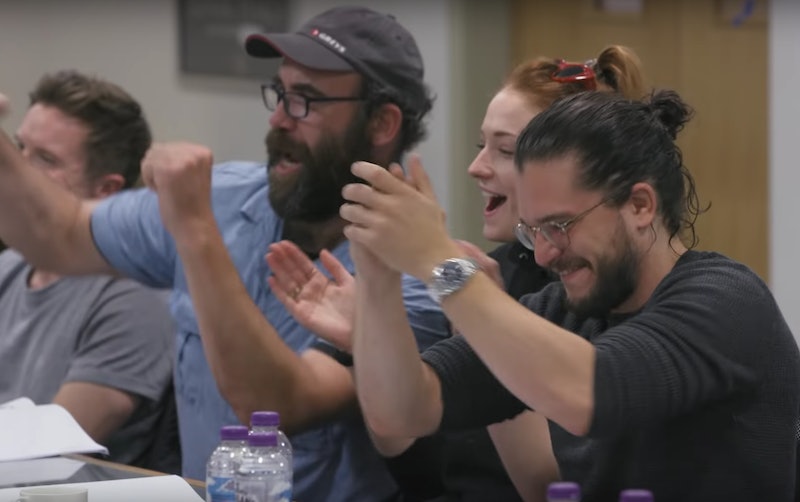 First things first: there are no spoilers for the final ever episode of Game of Thrones ahead, so you can read in peace. If you haven't yet seen who will end up on the Iron Throne, you're probably still preparing to say goodbye to a series that has caused arguably the biggest cultural conversation in history. Thankfully, you don't have to just yet, as Sky Atlantic has confirmed that a new documentary about the show, called The Last Watch, will air very soon. Here's how to watch the Game of Thrones documentary in the UK.

Earlier this month, a trailer for a two-hour behind-the-scenes special was released, showing just how much the series has meant to its cast and crew. It starred an emotional Kit Harington (Jon Snow), Emilia Clarke's final ever scene as Daenerys Targaryen, and powerful words from numerous crew members. Entitled Game of Thrones: The Last Watch (hold back the tears), the documentary will be shown on Sky Atlantic on May 27 at 9 p.m., a tweet from the channel has confirmed. (If you don't have Sky, you can watch it via a Now TV subscription.)

The entire documentary will not only pay tribute to the actors, but the crew too. If you've watched any of the series' YouTube videos that dive into the making of each episode, you'll know how much work went into creating the final season. And despite more than a million people signing a petition urging for a Season 8 remake, the costumes, sets, and CGI techniques are not to be sniffed at. Game of Thrones: The Last Watch will explore how initial ideas and visions translated into a dark and brutal TV reality.

British filmmaker Jeanie Finlay spent a year on set making the documentary. According to his site, the film-length programme "delves deep into the mud and blood to reveal the tears and triumphs involved in the challenge of bringing the fantasy world of Westeros to life in the very real studios, fields, and car parks of Northern Ireland."

It promises to be "an up-close and personal portrait from the trenches of production, following the crew and the cast as they contend with extreme weather, punishing deadlines, and an ever-excited fandom hungry for spoilers." The synopsis also states that it's "more than a 'making of' documentary," instead calling it a "funny heartbreaking story, told with wit and intimacy, about the bittersweet pleasures of what it means to create a world — and then have to say goodbye to it."

Any diehard Thrones fans will know how gruelling Season 8 was for everyone involved. The battle between the Night King and, well, everyone else was particularly tough for cast and crew. As Entertainment Weekly reports, the third episode is reportedly the longest battle sequence in the history of cinema and took 11 weeks of night shoots in freezing Irish temperatures.

"It was the most unpleasant experience I’ve had on Thrones, Iain Glen (Jorah Mormont) told the magazine. "A real test, really miserable. You get to sleep at seven in the morning and when you wake in the midday you’re still so spent you can’t really do anything, and then you’re back. You have no life outside it."

I'm sure every Game of Thrones worker loved having their tired miserable faces filmed for a much anticipated documentary.