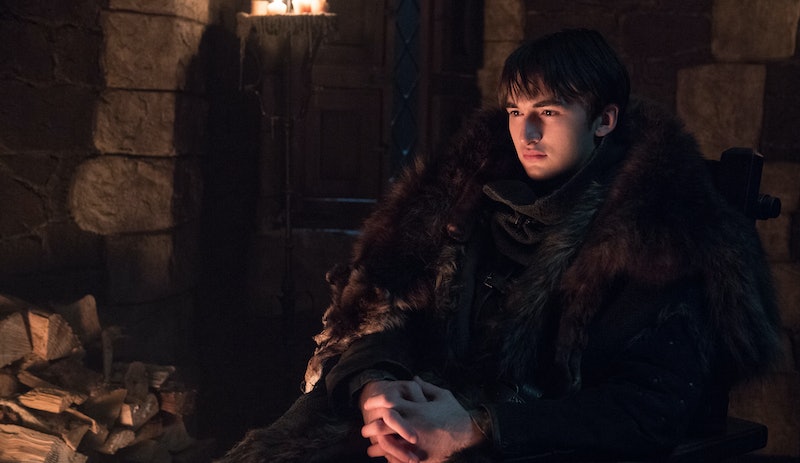 No matter how you feel about how this final season is going, the Game of Thrones finale is upon us. If sitting through the entire final episode and anxiously waiting to see how it all ends sounds unbearable to you, there is a way to watch the Game of Thrones series finale ending before pretty much everyone else does. Anyone who streams Game of Thrones via HBO GO or HBO NOW rather than watch it on live TV may already know of this little hack, so it's not really a secret worthy of Varys' little birds. And while we at Bustle certainly don't encourage you to go around spoiling the end for people, here's how can see the end of Game of Thrones just the tiniest bit ahead of schedule.

Are you the type of person who likes to read the last page of a book before you start it? Well, if you are — and considering that George R. R. Martin made it impossible for you to know the ending of Game of Thrones before the finale — you'll love this little trick.

At exactly 9 p.m. ET, HBO premieres Game of Thrones on live TV, but the network also releases it through its streaming vehicles HBO GO (for cable subscribers) and HBO NOW (for cord cutters). When you start the episode on the streaming sites, the entire episode is available — meaning you have the ability to jump to any moment of the episode. So if you wanted to see the final shot of Game of Thrones, you should be able to simply use the video progress bar at the bottom to jump to the very end.

The above screen grab applies this method to the penultimate episode, "The Bells." Although the runtime was reported as being 80 minutes long, the episode's final shot came 37 seconds earlier at 1:19:23. But still, using that approximate time, you can jump to when the episode truly ends since the "Inside the Episode" feature and the credits makes the runtime a bit longer. The series finale is also reported to be 80 minutes long, so you can apply the same principle and jump to about the one-hour-and-20-minute mark.

Of course, if you do it this way, you won't get any context for the final shot. As "The Bells" screenshot highlights, you would have realized that King's Landing gets set ablaze before anyone else, but you wouldn't know that it was Daenerys going all Mad Queen on the innocent civilians — not Cersei — who was to blame for this destruction. But I guess you'd still earn some bragging rights that you saw the end before anyone else.

If the final shot is of someone sitting on the Iron Throne, then yes, you'll probably feel as smug as Bran the Three-Eyed Raven that you knew who "won" Game of Thrones before anyone else. But if it's vague, well — this technique also allows you to go back a few minutes to see what went down. And you'll probably get the gist no matter what, especially when you consider the other endings of the major episodes this season. "The Long Night" ended with Melisandre walking to her death beyond the walls of Winterfell — an indication that the Red Woman had come to help the living defeat the White Walkers. And "The Last of the Starks" showed a (ahem) stark-raving mad Daenerys walking away from Cersei atop the gates of King's Landing.

Whether you are too anxious to sit through all 80 minutes, love to know an ending in advance, or don't think Game of Thrones Season 8 has earned your full attention, this lifehack might make you feel like the queen or king of the night. (Just not the Night King, please.) But if you do take on such a risky endeavor, show some compassion and don't ruin the end for everyone else who is watching in real time. Because after watching hours and hours of Game of Thrones since 2011, you'll only have to wait an hour and 20 minutes for the rest of the world to be caught up with you. And until then — well, they'll be like Jon Snow and no nothing. But as Game of Thrones fans know all too well, sometimes ignorance is bliss.