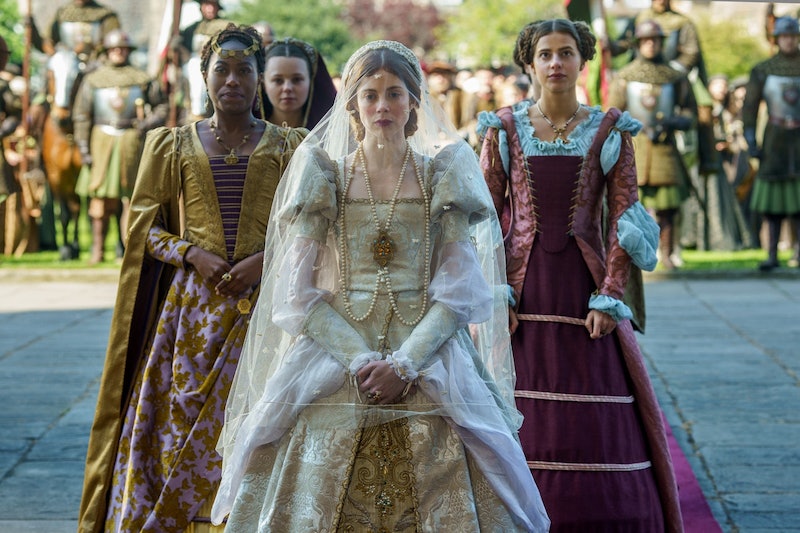 The Spanish Princess follows the teenage years of Catherine of Aragon as she arrives in England to marry the heir to the English throne, Prince Arthur of Wales. The new series is based on the Philippa Gregory penned novels, The Constant Princess and The Kings Curse, and stars the likes of Charlotte Hope and Downton Abbey's Laura Carmichael. If this historical-period drama sounds like your cup of tea, you're in luck, because the U.S.-produced series is now available on this side of the pond, and here's how to watch The Spanish Princess in the UK.

According to the Express, the series was first released on Starz in the U.S. on May 5, and those hoping to catch The Spanish Princess in the UK can find the series on Starzplay via Amazon Prime. Viewers can sign up to a week-long free trial of Starzplay, and once the trial is complete, users will have the option to subscribe for £4.99 a month. Alternatively, an Amazon Prime membership will set you back £7.99 per month.

As mentioned previously, the drama is set in 16th-century England, and follows the story of Catherine of Aragon — also known as the Spanish Princess, and heir to the English throne.

An official synopsis for The Spanish Princess reads:

"The Spanish Princess is a vivid and captivating story told uniquely from the point of view of the women, which also sheds light on a previously untold corner of history: the lives of people of colour in 16th century London. Catherine of Aragon is the Princess of Spain, who has been promised the English throne all her life. She arrives in a rain-lashed England with her glorious and diverse court including her ladies-in-waiting Lina and Rosa. When her husband dies suddenly, the throne seems lost to Catherine until she sets her sights on the new heir, the future King Henry VIII."

As reported by Variety, The Spanish Princess completes the miniseries trilogy that began back in 2013 with The White Queen, and continued in 2017 with The White Princess. Emma Frost, who worked as a writer and show-runner on all three series, has previously discussed how the female alliances portrayed in the show are reflected behind the scenes. She said, "We had a very conscious desire both politically and creatively to prioritise looking at the work of women [when we were crewing up]. Though we’d ultimately hire whoever was best for the job, with this show we were into the third iteration and felt a strong desire to really lean in to the female gaze."

According to the Express, the cast of the series includes Game of Thrones actor Charlotte Hop as Catherine of Aragon. Her ladies in waiting are portrayed by Stephanie Levi-John and Nadia Parkes as Lina de Cardonnes and Rosa, respectively. Laura Carmichael, best known for her role in ITV's Downton Abbey, plays the character of Maggie Pole, and Fleabag star Angus Imrie appears as Arthur, Prince of Wales, looking almost unrecognisable in his royal garb (see below).

New episodes are uploaded to Amazon Prime every Sunday, and with a cast this strong, I cannot wait to see how The Spanish Princess continues to unfold.