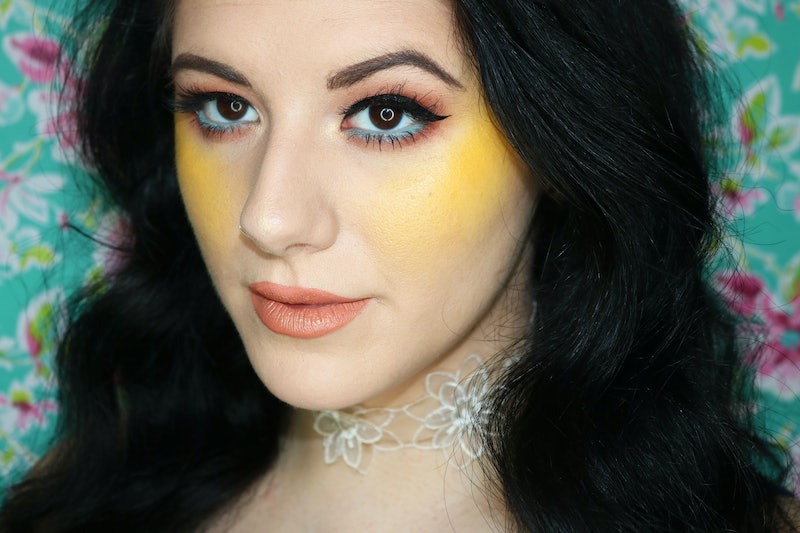 Yes, you read that headline correctly: Yellow blush. In all honesty, this trend is making the rounds on social media, but it's hard to tell how to execute it without looking sallow. Never one to back down from a challenge, I made it my business to figure out how to wear the "unwearable" yellow blush trend — and it actually looks pretty awesome.

In general, in many shades, blush is having a major moment. From Rihanna on the steps of the Met to numerous product launches from Anastasia Beverly Hills, Ciaté, and It Cosmetics, blush is becoming a statement on its own, no longer taking the backseat to bold lips and cut-creased eyes.

Generally, we pick blush colors that mimic a natural, healthy flush. Think of one of the most well-known blushes of all time: NARS Orgasm. Like the name itself states, this blush was meant to convey the naturally glowy rush of color that occurs post, well, you know.

Yellow as a flush, however, is slightly less common, and a bit trickier to apply. The key is over saturation and high placement of product. Just look at this amazing beat by artist @catysuewho.

If you don't "go for the gold" when applying your yellow, the look will appear washed out and faded. But, when you commit to the color, it's the coolest pop ever.

For additional sunny inspo, just feast your eyes on this beautiful glam created by @valepintusmakeup on model @zemira_whitehead, captured by photographer @elizabethmaleevsky.

Draping really takes the yellow blush look to a trendsetter level and forgoes the sickly stage altogether. Aim for placement along the cheekbones and the temples, where you would place shimmery highlight, rather than the traditional apples of the cheeks.

But, of course, this makeup Bill Nye had to put this theory to the test to prove once and for all if yellow blush can actually be wearable.

I started by applying my everyday complexion routine, brows, and a peachy-nude lip. I wanted to let the yellow blush really take the reigns here, so I decided to do my eyes last to balance the look.

Now, I certainly don't own yellow blush. I barely even own yellow eyeshadow. I have Phresh from my vintage Anastasia Artist Palette, but even that isn't bright enough for the toxically sunny look I wanted to create. So I turned to the straight up yellow cream color from my Make Up For Ever Flash Palette. In Caty's look, she layered MAC eyeshadows in Goldenrod and Chrome Yellow over Melba blush, which looks stunning. But, I didn't want to commit to totally new purchases over a look I wasn't sure I'd ever rock again.

Because I was using such a highly pigmented cream, I utilized my beautyblender to apply the color in sheer layers, focusing the saturation at the high points of my cheeks, and radiating out from there.

And that's pretty much all there is to it.

I also lightly contoured my eyes with peachy shades that match my lips. I also added a little electric blue liner in my bottom waterline to further pop the yellow blush. I drew on a tiny-ish wing and slapped on some lashes.

Now here's the thing: I actually kind of love it. I think it's super cute and extremely fun.

If I wasn't afraid of strangers coming up to me on the street to ask me what I was wearing and why, I'd actually wear this out of the house. I love the way this aesthetically looks. I just hate the unnecessary commentary of the New York City streets. Even though this isn't going to become a regular part of my makeup routine, the look is still totally wearable — and worth a try if you're feeling adventurous.