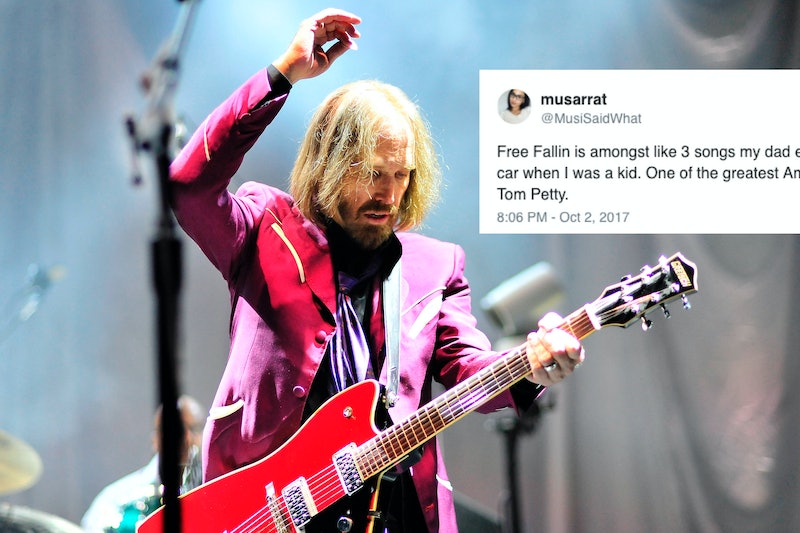 Late Monday night, it was announced that after suffering a cardiac arrest in his Malibu home, Tom Petty died at age 66. Being that false reports of Petty's passing had circulated throughout the day, fans had already started paying their respects. Many fans took to Twitter to remember Petty for bridging the gap between parents and their kids.

"I used to watch Tom Petty's brilliant music videos with my dad as a kid. Our tastes in music don't overlap much, but we shared that."

Petty was dad rock at its finest, because it wasn't just for dads. His music was the kind that parents excitedly introduced their kids to early on, hoping they would love it. Often they did without ever thinking about in those terms. As comic book writer Mike Norton tweeted, "Tom Petty, like the Beatles, was just always THERE when I was a kid. It’s not a matter of whether I LIKED their music. They WERE music."

And it was definitely the kind of music that was hard not to like. It's why it seems as if everyone has a favorite Petty song. Likely, you would think of one song, only to think about 10 others of his that you also love. Whether it was with his band The Heartbreakers, on his own, or with the supergroup the Traveling Wilburys, Petty was the soundtrack of families everywhere — mine definitely included.

I can particularly remember a full-throated family sing-along of "Free Fallin'" on a road trip to Cleveland, Ohio to visit the Rock and Roll Hall Of Fame. Or, my little sister and I taking on the harmonies of "Learning To Fly" only to end up hysterical laughing, something we still do today. It seemed that after news of Petty's passing others wanted to share those same memories.

"When I was a kid," journalist Wes Rucker tweeted, "Tom Petty’s Full Moon Fever got stuck in the cassette deck of my mama’s minivan for four months. We never got tired of it." Another fan tweeted, "Free Fallin is amongst like 3 songs my dad ever turned up in the car when I was a kid. One of the greatest American songs."

All of these memories a reminder of how ubiquitous Petty was in our lives. Sometimes, being the reason we even had one. "Tom Petty means a lot to my parents," journalist Sarah Amy Harvard wrote. "Instead of 'Here Comes the Bride,' my mom walked the aisle to 'Free Fallin' when she married my dad."

From classics like "American Girl" and "Refugee," Petty's catalogue was something you could put on knowing no one would be disappointed. Turn on the radio, and it's likely you could find Petty playing somewhere. He was always on the radio — not just his music, Petty had hosted his Buried Treasure radio show since 2015 — yet he was the kind of artist that you never turned the dial for.

It was always good to hear that raspy, un-pretty voice of his because his music was a nostalgia trip that you always wanted to take. Petty was just part of everyone's pop culture from his videos like the Alice In Wonderland-inspired "Don't Come Around Here No More," or the creepy Kim Basinger-starring "Last Dance With Mary Jane," which seemed to always be on MTV and VH1.

Petty's music appeared in movies that you watched with your friends and family because they were always on cable like Jerry Maguire and Silence Of The Lambs. Petty even appeared as himself on The Simpsons, and as a reoccurring character on King Of The Hill.

Petty was often the best part of pop culture, because even in the toughest times, he was something good that you wanted to remember. "Crying over @tompetty," a fan tweeted. "I'll never forget singing and dancing to Free Fallin' and the entire Full Moon Fever album with my dad as a kid."

But, Petty's music doesn't just bring you back, it's also something you take with you into the future. That music age gap is coming full circle for many of those kids who loved (or hated) listening to Petty with their parents.

"Tom Petty was music my dad would listen to and I would complain," writer Sarah Kendzior tweeted. "Then I got old, and now I make my own kids listen to Tom Petty."

Petty's music will live long after he's gone through classic rock stations and Spotify playlists that parents share with their kids for years and years to come. He's a reminder of how much music means to all of us, the happiness that it can bring, the differences it can bridge. The joy that Petty has brought and continues to bring to people's lives will never die.

More like this
The Spice Girls Just Dropped A Brand New Music Video
By Sam Ramsden
Kate Bush Revealed The Real Meaning Behind 'Running Up That Hill' Lyrics
By Darshita Goyal
Everything To Know About Taylor Swift’s 10th Studio Album, 'Midnights'
By Grace Wehniainen and Jake Viswanath
Twitter Is Freaking Out Over Rihanna’s 2023 Super Bowl Halftime Show Announcement
By Stephanie Topacio Long
Get Even More From Bustle — Sign Up For The Newsletter