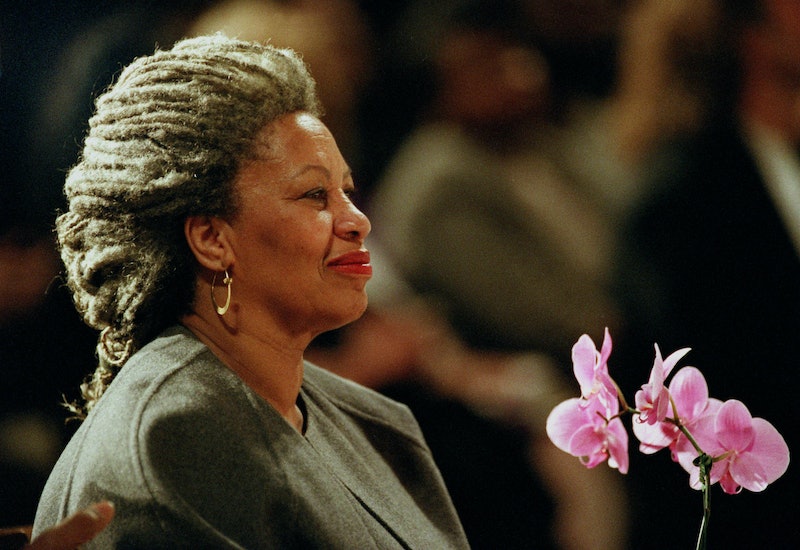 Toni Morrison during "An Evening with Toni Morrison and Her Friends" at the Cathedral of St. John the Divine in New York in 1994, courtesy of Kathy Willens/AP/Shutterstock
By Joelle Monique
Aug. 7, 2019

I was nine when I found a nearly destroyed copy of Beloved on my mother's shelf. The red lettering was gently smudged and faded where many hands had gripped the cover. All it took was reading the second sentence — "Filled with baby's venom" — to hook me completely. Was the baby poisoned or poisonous? In later readings, it was the first sentence — "124 was spiteful" — that struck me as audacious. That Toni Morrison would begin the first sentence of her book with a number was unheard of at my tender age. Most novels begin with either a description of a character or of the weather. Beginning with a house number and a list of characters burdened by contempt would almost certainly earn deductions on any of my English papers.

But Ms. Morrison wasn't concerned with the conventional rules of writing.

In my visceral memory of finding the book and reading Ms. Morrison for the first time, I turn the book over to the back cover to reveal her round face. It looks much like mine. Her thick grey dreads are a beautiful contrast to her dark skin. When I close my eyes, I see both a witty smile and a studious frown. Yet, when I revisit the book today, I realize Ms. Morrison hadn't yet grown her signature dreads. My memory of that first encounter is mingled with the magic spell of time. Ms. Morrison’s books hold that same mix of honesty and otherworldliness.

Ms. Morrison died on Monday at the age of 88. Over the course of her career, she wrote 11 novels, taught at Princeton University, edited books at Random House (and became a champion of Black authors in the process), won the Presidential Medal of Freedom and the Pulitzer Prize for Fiction, and became the first Black woman to win the Nobel Prize in Literature. Grounded in the rich tapestry of Black American History, Ms. Morrison told the stories of my ancestors as someone one who both heard the tales growing up, and as someone who experienced life with both eyes open. Her work illuminated the dark corners of life that no one would explain to me as a child. Slavery, sexual assault, family secrets, romance, heartache, and all the mysteries of the universe were whispered about in holiday kitchen gatherings as my aunties fussed over the feast. But when I asked for clarification, I was shooed away. "Grown folks are talking," I was told.

During her Nobel Prize Lecture in 1993, Ms. Morrison said, "Oppressive language does more than represent violence; it is violence; does more than represent the limits of knowledge; it limits knowledge." Through Ms. Morrison's words, the mysterious began to take solid form. In her 1992 book Jazz, Violet Trace attempts to understand how she ended up living her life by reliving each crucial, mundane choice. She tortures herself over her decision not to have a child, over her career, over her selection in a life partner. In reading it, I understood the great weight my choices would one day hang on me. Jazz asked women to do better — not for an ideal, or another person, but for themselves. Jazz could show the scars of slavery through time, without drowning a character in victimhood.

Other slave narratives I experienced at the time rarely held a candle to the level of depth Ms. Morrison created. Watching Steven Spielberg's Amistad at 10 years old was a confounding experience. Despite having roots in true events, the story failed to portray humanity in the enslaved. They were not people. They were perfect victims. No one could begin to second guess their decision making. They were simply trying to survive. In a PBS interview, Ms. Morrison articulated the distinct difference in her views on race and slavery in America. She said, "If I take your race away, and there you are, all strung out. And all you got is your little self, and what is that? What are you without racism? Are you any good? Are you still strong? Are you still smart? Do you still like yourself?"

Jazz asked women to do better — not for an ideal, or another person, but for themselves.

How can I describe the profound impact of these questions? To be young, gifted, and Black is to know how your race impacts every interaction. The goal is to dismantle the oppressive institution. It has been the goal of your people since they arrived on these shores. At 18, I had not thought to imagine myself outside of that system, nor to consider what I meant to myself. Of course, this was the beauty of Beloved’s Denver. Her lack of social interaction growing up led to a lack of imagination. Without that fundamental tool, she couldn’t picture a better life for herself.

Morrison never backed away from the pain caused by white Americans. In that same PBS interview, she said, "I mean, these are the questions. Part of it is, Yes, the victim. How terrible it's been for Black people. I'm not a victim. I refuse to be one... if you can only be tall because somebody is on their knees, then you have a serious problem. And my feeling is that white people have a very, very serious problem and they should start thinking about what they can do about it. Take me out of it."

Was it not my responsibility to address the uncomfortable feelings white Americans had about race? I tried very hard in my youth not to identify with Pecola Breedlove, the main character in The Bluest Eye, Ms. Morrison’s debut novel. I hated her for wanting blue eyes, for wanting to change for a society that I knew could not accept her for anything other than the Black woman she was. I was the only Black girl in my school until 7th grade. I wished my hair was straight. The similarities were too close to home. Of course, that was the point of the book. But, I didn’t recognize how much racism drove me to hate myself.

I grew up in the ‘90s, under the rules of Bill Cosby, whose gospel preached the doctrine that being well behaved can save. Pull up your pants, speak properly, and white people won't have a problem with you. Listen to the police, and you won't end up dead. Go to college, and you'll be set for life. Ms. Morrison offered another way. She saw a path to being authentically and comfortably Black, without being responsible for anyone else's reaction to that Blackness. Her words were a gift that lifted the burden of otherness. Ms. Morrison allowed space for her characters to be deeply flawed human beings, and still worthy of peace and prosperity. She did not let Denver suffer in her shortcomings. Instead, readers watched Denver rise, fumble, and ultimately achieve, laying a blueprint for the rest of us to do the same in our own lives.

She saw a path to being authentically and comfortably Black, without being responsible for anyone else's reaction to that Blackness.

For a long time, when I thought about the line of individuals that led to me, I pictured them under duress — tortured, afraid, and without the ability to end their suffering. Every Black History Month was rooted in sorrow. I can still remember my first panic attack. I was in a history museum, and my mother and my grandmother wanted me to experience a new exhibit on slavery. In the center of the space, surrounded by rusted chains and a blown-up image of a man with dozens of whip scars covering his back, stood a long tunnel. On the inside was a mural that depicted different types of oppression faced by Black Americans throughout history. An audio track of hateful slurs and angry shouts echoed down the chamber. I had to be carried through. That pain came to define how I saw myself. It took reading Ms. Morrison's work and the works of the many authors she brought to the public conscious, including Angela Davis, to understand that there had been immense joy in the events that led to my becoming. The pain was a factor, but not the center of my ancestors' world. They found life outside of oppression. Shading those interior spaces of love changed the way I was able to love myself.

In college, I was living in my grandmother's house while finishing film school. On the cusp of independence, but still reliant on family, I was pursuing a career in the arts, which had everyone a little on edge after the 2008 crash. Raiding my grandmother’s bookshelves, I discovered the purple and white smokey cover of Jazz. I did what I always do when I have a fresh book in my hands. I flipped to the last page and read the final paragraph. There was an odd rhythm to the language, different from the other books by Ms. Morrison I had read. Different from any book I had ever read. Scouring the passages on the train to the city, the rhythms began to make more sense. I was reading music. Somehow, by tap dancing on grammar and waltzing through a deep vernacular that could only come with years of editing, Ms. Morrison was playing jazz with just text. Avoiding the horrible sing-song cliches, or rap affected verbiage many creatives used to convey music in their prose, Ms. Morrison studied the structure of a jazz tune and then recreated it with long and staccato words. Sometimes, she let words crash like a symbol to invoke a sickening burn or the definitive end of a fight.

Scouring the passages on the train to the city, the rhythms began to make more sense. I was reading music.

An expert at laying truth bare, she wasn't afraid of exploring taboo subjects. Outside of her literary work, Ms. Morrison showcased the best way to handle racist assumptions with swift tact. I watched her more challenging interviews, and I wanted more of her. She never gave the sense that she wasn’t 100% sure of what she was saying. She never raised her voice, and she never tried to crush her interviewer. She simply explained in what ways they were wrong and let them ask their next question. "Freeing yourself was one thing, claiming ownership of that freed self was another," she wrote in Beloved. She embodied that ideal in many of her public interactions.

One of the most famous lines from Beloved reads: "Definitions belong to the definers, not the defined." I’ve spent this entire time trying to define the woman who showed me how to take up space — to plunder her words for an ounce more meaning, something I had missed. But, like my early tinted memories of picking up Beloved, I realize Ms. Morrison wasn’t magic. She was a woman who could find grace for any individual, but she poured most of into Black women. In Pecola, she showed how racism carves self hate into the very skin of young Black women and how feeling a lack of beauty can corrode the soul until almost nothing is left. In Violet, she displayed the difficulty of living with the choices not made and gorgeously exemplified how life could be rewarding despite those pangs. Ms. Morrison’s women are like sisters to me. Guides given by a benevolent god to shine a light on paths I never considered. What better gift can be given or received than a new hope?