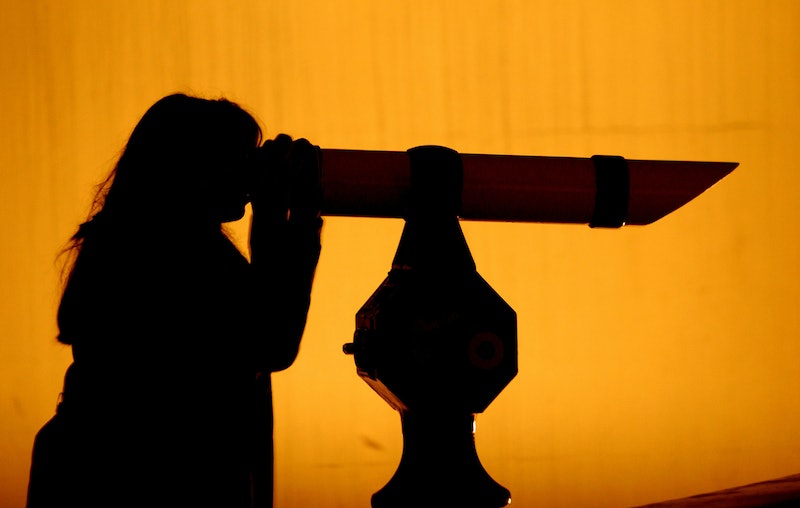 On Tuesday, the first ever picture of a black hole was released to the general public. The photo, which looks something like an orange ring surrounded by darkness, caused an understandable stir across the internet. And if you're wondering how the photo of the black hole was taken, you should know that a computer scientist named Katie Bouman deserves a lot of the credit.

Bouman was a junior member on the imaging subteam involved in the project, according to CNN. Over the course of her research, she was a Ph.D. candidate at the Massachusetts Institute of Technology (pursuing a degree in electrical engineering and computer science), then a postdoctoral fellow with the Event Horizon Telescope. The latter is an organization that aims to "directly observe the immediate environment of a black hole," per its site. In the fall, she'll be an assistant professor at the California Institute of Technology, according to her bio.

Bouman wrote an imaging algorithm in 2016 (back when she was a Ph.D. candidate) that would eventually lead to the image the world got to see today, CNN reports. Her algorithm, along with several others, helped scientists piece together a ton of data received through telescopes into the photo of the black hole. To the news network, Bouman explained:

We developed ways to generate synthetic data and used different algorithms and tested blindly to see if we can recover an image. We didn't want to just develop one algorithm. We wanted to develop many different algorithms that all have different assumptions built into them. If all of them recover the same general structure, then that builds your confidence.

She continued, "Each telescope in the worldwide network works together. Linked through the precise timing of atomic clocks, teams of researchers at each of the sites freeze light by collecting thousands of terabytes of data. This data is then processed in a lab right here in Massachusetts." In other words, instead of trying to capture the black hole once, the organization worked to capture it from thousands of different angles, putting all of those pieces of data toward creating that one image.

If you want to watch her TED talk in full, Bouman offers a number of educational metaphors to help you better understand how her team was able to take a picture of the black hole.

To CNN on Wednesday, Bouman insisted that the release of the black hole photo was a group success. "No one of us could've done it alone," she said. "It came together because of lots of different people from many backgrounds."